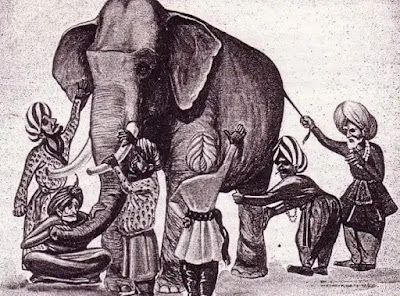 BY GENERAL CONSENSUS “myth,” “mythology,” and “mythic” are the words most commonly used in descriptions of Glorantha.  “Welcome to the mythic world of Glorantha,” Rob Heinsoo and Jonathan Tweet write in the intro to 13th Age Glorantha. “A world of mythology, gods, and heroes,” the Glorantha Sourcebook adds. “A mythic world of mortals and gods, myths and cults,” RuneQuest agrees. Now, on one hand, when you see the word “myth” the mind immediately jumps to gods and heroes—the usual protagonists of these tales—and Glorantha is certainly a setting full of such things. On the other, what consistently surprises newcomers to the setting is that it actually less to do with deities and demigods than it does culture, society, kinship, gender, class, and ownership. What surprises people, hearing all the “mythic” descriptions, is how Glorantha is far more about “how people live” than most other fantasy settings.

This shouldn’t be surprising however.

Bronislaw Malinowski (1884-1942) was one of the 20th century’s most influential anthropologists. He had a tremendous influence over how we continue to define “myth” today, and while some modern anthropologists have broken with his ideas, it seems clear that Greg Stafford, when he started writing Gloranthan stories in the 60s, was influenced by them. In the 1926 essay, The Role of Myth in Life, Malinowski writes, “an intimate connection exists between the word, the mythos, the sacred tales of a tribe on the one hand and their ritual acts, their moral deeds, their social organization, and even their practical activities on the other.” This definition has become something of a standard, to the extent that the Oxford English Dictionary defines myth as “a traditional story, especially one concerning the early history of a people or explaining some natural or social phenomenon.” Myth is the foundation not only of how a society sees the world, but also how they see themselves and the way to live in it. It follows that the myths of Glorantha primarily give us insights into its peoples. After all, that the sun rises and falls is an observable fact. Why a certain culture thinks it rises and falls is the purview of mythology.

Perhaps because our own society is so conditioned to prioritize fact over meaning—and as a consequence “myth” has been redefined as something false or untrue—a lot of Glorantha fans get lost in the minutia of the mythology and all the apparent discrepancies. They want to know whether Orlanth has four arms or two, whether Yelmalio is really Elmal, whether Humakt brought death by killing Grandfather Mortal or Rebellus Terminus did by killing Murharzarm, whether Vinga is Orlanth or Orlanth’s daughter, etc. They want to know the chemical composition of the sun rather than why American children draw it with a yellow crayon while Japanese draw it with red.

But myth will not give you facts, only meanings.

Take the question of Vinga. At times described as the daughter of Orlanth, she is at others described as his feminine side or incarnation. This leads some fans to question which is accurate. But simply put, gods do not reproduce like humans. Indeed, it is debatable that even Gloranthan humans procreate as we do (sperm, zygotes, eggs…does DNA even exist?). The myths are not talking about Vinga as a bodily person. She has no body. She is a god. What the myths are talking about is one of the six Orlanthi genders, the “man in the shape of a woman.” Whether as the incarnation of Orlanth or as his daughter, the myths tell us that the Orlanthi view Vinga as the same as Orlanth, as his equal, and by extension view Vingan women as separate but equal to Orlanthi males.

The Dara Happans, meanwhile, say that Death came into the world when “Rebellus Terminus” slew Murharzarm, the First Emperor. The Humakti, and most Theyalan peoples, say that Humakt did the deed when he killed Grandfather Mortal. Viewing either of these as a murder investigation we can solve by calling in a Jrusteli CSI unit also misses the point. It does not really matter how Death came into the world, or which murder was behind it.  What matters is that the Dara Happan myth is telling us the core importance the Emperor holds in their society. He is the Pillar, the Axis Mundi the Empire (and world) revolves around. Rebellus Terminus—who might be Umath or Orlanth but is definitely a barbarian outsider—ruined the world by cracking that pillar. This tells us how the Empire views the mountain barbarians as well. The Humakt story by contrast is not about blaming the ills of the world on outsiders. Rather, it is about taking personal responsibility for a transgression, a core virtue in Theyalan society. Again, death is an established observable fact. It happens. The purpose of the myth is to tell us what death means.

The confusion over Elmal and Yelmalio is another excellent example of misunderstandings in how myth gets approached. It also illustrates criticism one often hears of the setting…that the only explanation for changes are when something gets “Gregged.” This fairly pejorative verb is used when one means to say Greg Stafford changed something because A) he could, B) he was inconsistent, or C) both. It is a criticism that tells us more about the critic than the criticized, however. There are often perfectly logical internal reasons for the change.

Yelmalio’s shift to Elmal, and back again, is not the same thing as the world being flat and then suddenly round. Gods change identities all of the time. The Egyptian Set, a god of deserts, outsiders, and liminal spaces, became the chief deity of the Egyptian pantheon for a time—the pharaohs Seti I and Setnakt were named after him—before becoming a worse demon than before. The Hebrew tribal god Yahweh merged with his rivals, like Adonai and the Elohim, to become not only the sole God of the ancient kings of Jerusalem but eventually the sole deity of  Christendom. No one accuses Set or Yahweh of being Gregged.

Elmal and Yelmalio, as well as Kargzant and Antirius, are all manifestations of the planet Lightfore. Each is described as the Son of the Sun. Lightfore is that little spark of the Sun that did not die when the rest of the Light did. In all the mythologies of his various forms, he is the last light, the dim light that prevents total darkness from ascending. The meaning of Lightfore, then, is the Light That Never Surrendered. Whatever specific things are said of these manifestations are again just cultural nuances. Elmal’s steadfastness and Yelmalio’s “never say die” are just local color. The apparent “switch” between these gods is one of the rare accidents of history in Glorantha, rather than myth (their myths are intrinsically the same). A powerful cult in First Age Dragon Pass, the Yelmalio cult was all but destroyed in the Dragonkill War. When southern Orlanthi migrated back into the Pass, and Lightfore was still obviously there, they simply called it by its Elmal name. In the Third Age, when the cult of Yelmalio re-assumed its power, worshippers of Elmal reintegrated back into it. It made sense. Why worship a god who plays second fiddle to Orlanth when you can worship the same deity as a strong, respected, and independent rival.

The point of all this is that the Elmal/Yelmalio “switch” can only bother you if you assume your god cuts himself shaving. That is to say, he is a singular biological entity. This is the kind of god popularized in the 1960s with books like Chariots of the Gods, the ludicrous notion that the gods of ancient mythologies must have just been really advanced aliens. Comics like Jack Kirby’s Eternals or New Gods—or the Asgardians of Marvel’s Thor—took the idea and ran with it, ending in books like Deities & Demigods. If you regard a god as simply a being with super-powers and longevity, switching from worshipping Elmal to worshipping Yelmalio seems like switching between two different people. If you view gods as expressions of the numinous, on the other hand, as Gloranthans do, there is no confusion.

None of this is to say that the gods do not “exist,” or that Gloranthan mythology is the invention of mortals. Again, this is modern Zero-sum thinking against which I suspect Gloranthans would argue something like the ancient India parable of the blind men and the elephant. For those who don’t know it, essentially five or six blind men touch an elephant and each feels something different; a “tree trunk” (its leg); a “great serpent” (its trunk), a “canvas sail” (its ear); a “wall” (its side) and so on. Each has an experience of the same thing and know it exists, but each has a different experience. None can see the entire thing because they are blind, just as no Gloranthan can see an entire god because they are blinded by being inside Time. Heroquesting is not seeing the elephant either…it is just touching it. So arguing that Elmal and Yelmalio are different entities because Heroquesters have different experiences of them or cults receive different magic doesn’t really work either. Orlanth Adventurous and Orlanth Rex give out different magic too, and no one is calling them different entities. Gloranthans know the gods are real because they can touch them…they just cannot experience the totality of the god in its entirety.

To cultivate a more Gloranthan sense of mythology, try these mental adjustments:

Posted by Andrew Logan Montgomery at 6:00 AM