CALL OF CTHULHU at 40

IN THE SPRING OF 2002 I left the United States for Japan. This meant, of course, packing up my entire library and putting it into storage. I had a massive collection of gaming books, acquired over two decades and helped along by having worked, twice, in different game stores. Parting with that was probably the hardest part about the move.

I mention this because I brought one book with me. Just one. It wasn't my hardcover 2nd edition Runequest or my beloved Nephilim. It wasn't even Pendragon. The book I carried with me to Japan was the 20th anniversary edition of Call of Cthulhu, and it sits, still, on the shelf a few feet from my writing desk.

I was eleven the first time I played Call of Cthulhu, the year after the game came out. I had already played D&D for a few years, and was currently playing RQ, but Cthulhu was unlike anything I or my peers had ever seen. Set in the 1920s, the players took on the roles of ordinary men and women drawn into investigating the eldritch powers of the Cthulhu Mythos. There were no magic swords to be won, no treasures, and characters were more likely to suffer madness and grisly death than achieve glory. Despite this, the game was irresistible. When our characters met a hideous fate we hollered and cheered.

It is easy to forget, sitting here four decades after the game was first released, how iconic a thing it is and was. How absolutely genre defining. Outside of academic circles and hard core horror fans H. P. Lovecraft was virtually unknown. In my gaming group, I was the only person who knew what Cthulhu was (and that was only because I had just read Stephen King's Danse Macabre the very same year). The credit for putting Lovecraft on the map has to go to Sandy Petersen's quirky little roleplaying game. And while for many roleplayers D&D is still "the" roleplaying game, no one in their right mind would dispute that Call of Cthulhu is "the" horror roleplaying game. There isn't even a contest. Actually, if you are in Japan, Call of Cthulhu is "the" roleplaying game (or "TRPG"). While Japanese gamers have heard of D&D, few have played it. It never achieved anything near the popularity Cthulhu has here.

Now, I talk a lot about Runequest here, and Glorantha, and I've written quite a bit for it too, but the fact remains that it was Call of Cthulhu I carried across the ocean with me (I am actually writing something for Cthulhu as we speak, but am not at liberty to talk about it just yet). When push comes to shove it is literally the book I would (and did) drag with me to an (not exactly desert) island. The 20th anniversary edition, with its green leatherette cover and parchment pages, is still my favorite edition of the game. But all that is about to change now, because as impossible as it is to believe we are on the verge of the 40th anniversary edition, and it looks like my beloved green leatherette is about to get bumped to second place.

Now this is not a review, and for the record I do not have a copy of the 40th edition yet in my hot little hands. The book--which premiered at Gen Con--is a limited edition reissue of the 7th edition Call of Cthulhu Keeper Rulebook. Due for release in October, it has a stunning black leatherette cover and "includes personal accounts by some of the early creators and contributors to the game, new endpapers, and the re-inclusion of the 'The Haunting', the classic scenario..." The reason I can say with confidence it will replace my 20th anniversary edition as my new favorite toy is that the 7th edition has already proved itself the definitive version of Call of Cthulhu, and the fact the 40th anniversary edition exists is a testament to both the longevity of the game and the modern renaissance it is experiencing. So instead of a review, that is what I would like to talk about. Call of Cthulhu at 40.

Based on the writings of celebrated American author Howard Phillips Lovecraft (1890-1937), Cthulhu depicts a incomprehensibly vast cosmos occupied by utterly alien, often god-like beings, in which mankind and its concerns are insignificant.  There are no beneficent deities, humanity wasn't created in anyone's image, and there are no universal standards of good and evil. It is a brutal, uncaring universe where Investigators struggle to prevent the more powerful alien occupants from wiping out the human race too soon.  In 1981 its charm was in inverting most other RPG tropes.  You didn't create a first level character and watch them ascend to greatness...you created a capable professional and watched them slowly descend into madness.  You didn't boast about your character's heroic exploits...you bragged about the horrific way in which they met their untimely end.  Forty years later, I think this is still what makes Cthulhu different from most other games on the market. Even the horror ones. It is a scary game, sure, but it is also a blackly humorous one.

That element of having its tongue in its cheek--with decades of "Cthulhu for President" stickers and plush toy Cthulhu dolls (mine peers at me as I write this review)--is one of the game's greatest assets. Watching a group of veteran Call of Cthulhu players swap stories is a bit like Quint and Hooper showing off their scars in Jaws. Horror games can, by their very nature, be uncomfortable. Some, like Kult, have gleefully leaned into that. But Call of Cthulhu has survived this long because it has a sense of humor about itself, a quality that can make it attractive to the more casual horror fans who want the scares but don't want to be overpowered by them. Make no mistake, Call of Cthulhu has been scaring the crap out of people for decades, but it is self aware enough of the absurdity of it all that you can laugh about it afterwards. Thus, despite wearing the crown of "king of horror games" for forty years, Call of Cthulhu has deftly avoided the pretentiousness that marks some other game lines (looking at you, Vampire: The Masquerade, looking at you). 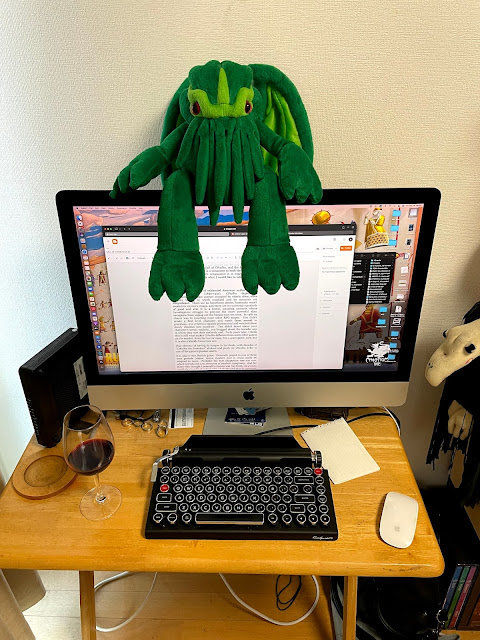 Not R'lyeh, just my desk in Tokyo

Cthulhu is also a very flexible game.  Generally played in one of three time periods (1890s, 1920s, modern era) it has been adapted to many more. We have seen it retooled for ancient Rome, the Dark Ages, the Old West, and several other time periods. Probably the most famous adaptation was Delta Green, which introduced X-Files elements of modern conspiracy.  And for those who find Lovecraft's cosmos was too bleak, Call of Cthulhu can also handle standard tales of ghosts and ghouls, vampires and werewolves.

But we can't talk about the 40th anniversary without talking about the game's renaissance.

I have discussed this before in reference to Runequest, but in 2015 Chaosium (Cthulhu's publisher for the one or two people who somehow stumbled into this article not knowing that) underwent what can only be called a rebirth. True, Chaosium never went out of business, and Call of Cthulhu never went out of print, but in 2015 the founder of the company, Greg Stafford, and Call of Cthulhu's original author Sandy Petersen returned after nearly two decades to active participation in it. They were soon joined by an all-new management team as Moon Design Publications became part of the ownership. I am not going to get into the full story here, and if you have read Shannon Appelcine's brilliant Designers & Dragons (and honestly, if you haven't stop calling yourself an RPG fan right now), you already know the first half of it. But the point is that 2015 saw Chaosium shake itself out of a long torpor. Not that the company had not published anything of merit in that period--Jason Durall and Sam Johnson's masterful edit of Basic RolePlaying remains one of my all time favorite books--but what came after 2015 was nothing less than extraordinary.

For Call of Cthulhu this meant the 7th edition. I was a bit cool on it in my 2015 review, and looking back at it I must have been exceptionally cranky that day. Having had six years to play with it, I can see now the system is smoother, more streamlined, and still faithful to all that came before. But the entire Cthulhu line since 2015 has been extraordinary. I am not just talking about the superior production values, but the products themselves. Berlin: The Wicked City has to be the all-time finest setting book Chaosium has ever produced for the game, and its treatment of LGBTQ+ Investigators was not only appropriate to any book set in Weimar Germany, it also showed that Chaosium was no longer going to shy away from controversial topics at the game table. They seemed to double down on this in publishing the 2nd edition of Chris Spivey's Harlem Unbound, which if Berlin is not Call of Cthulhu's best setting book this would have to be. Harlem is authentic, scary as hell, and brutally honest.

I could go on. The reissues of Malleus Monstrorum and Masks of Nyarlathotep were both clear exercises in taking the good and making it better. Pulp Cthulhu added a twist people had been waiting decades for. There was a new energy at Chaosium, a new level of ambition. And it showed.

So here we are in year forty. Some of us have spent nearly our entire lives playing the game. I have the 20th anniversary edition on my shelf and hope to put the 40th right next to it. While I might live to see the 60th, the prospect of the 80th seems like a long shot. Regardless, I am fairly confident they will exist. The 7th edition line demonstrates that the game can change, adapt, grow, and still remain true to the qualities that have given Call of Cthulhu its extraordinary longevity. At forty, Cthulhu is stronger than ever and I am sure that some day, someone will be holding the 100th anniversary edition.

Unless, of course, by that time Great Cthulhu has arisen from his ages-long slumber.

Posted by Andrew Logan Montgomery at 2:10 AM