SO FIRMLY ASSOCIATED with the Roaring Twenties and the Great Depression--the periods in which H.P. Lovecraft set the majority of his tales of cosmic horror--we forget that Call of Cthulhu has included a wide variety of time periods and settings over the years.  As early as 1986, just five years after the game's initial release, there was Cthulhu by Gaslight, moving the scene from the 1920s to the 1890s of Victorian England.  A year later was Cthulhu Now, which brought the game to the now quaint and archaic world of the 1980s.  In the wake of the X-Files, Delta Green (1997) edged the setting up to the end of the millennium.  Just over a decade later, Cthulhu Invictus (2009) set the story in ancient Rome. 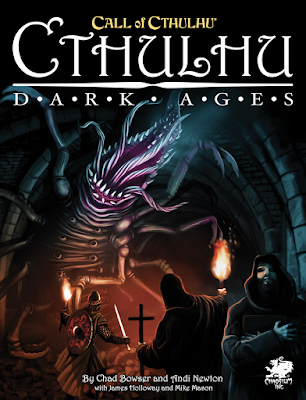 We'll come back to Invictus--and its authors Chad J. Bowser and Andi Newton--in a moment, but we would be remiss to forget Stéphane Gesbert's Cthulhu Dark Ages.  Originally published in German by Pegasus Spiele, under the title Cthulhu 1000 A.D., Chaosium's English edition came soon after in 2004.  The book was at once familiar and horrifyingly alien; it took a milieu (medieval Europe) we had seen in literally hundreds of games and a mythos (Cthulhu) almost equally recognizable and made them, somehow, more than the sum of these parts.  It wasn't even remotely similar to the fantasy settings we came to expect to see monks and clerics and warriors in, but a realm of brooding, investigative horror against inhuman and incomprehensible forces.  For me, it is in those forces that Gesbert outdid himself.  The Bestiary chapter introduced both new creatures and reskinned old ones (see what I did there) to look like they had been lurking behind medieval folklore all along.  Dwarves, goblins, Elves, vampires, even Satan all became masks of alien terrors.  Sticking out in my memory are the Old Ones, servants of Yog-Sothoth who inspired legends of the Fae, angels, even valkyries.  The effect was really something quite singular in a Call of Cthulhu supplement; as players and their Investigators worked to get to the center of the mystery, it would often end up that the players finally recognized the horror they were up against while the Investigators saw it as something entirely else.  The disappearing children?  The Investigators discover they are being taken away by gossamer-winged fairies associated with hollow hills and curious mushrooms...but the players see them as Mi-Go.

Cthulhu Dark Ages was a success, enough of one that the newly invigorated post-2015 Chaosium decided to bring it back (before even a new edition of Gaslight, this author notes, glaring at Chaosium demandingly and tapping his fingers on the table).  A sourcebook for the Call of Cthulhu 7th Edition Keeper Rulebook (it is not a stand-alone game), Cthulhu Dark Ages 3rd Edition follows in the footsteps of 2018's Masks of Nyarlathotep in that it does not merely update the previous edition to be compatible with 7e, but instead is a major revision packed with all sorts of new material that the devious cultists operating the Chaosium know you will not be able to resist.  Going forward then, I will summarize the contents of the new edition for readers altogether new to Dark Ages, but point out the changes and additions for those returning to it.

The Cthulhu Dark Ages I am reviewing is a 274-page PDF, written by Chad Bowser and Andi Newton (the team responsible for Cthulhu Invictus), with James Holloway and Mike Mason. It is based on Stéphane Gesbert's original. Visually, it is everything we have come to expect from the Call of Cthulhu 7e game line. The parchment colored pages, the layout, typefaces, etc are all identical to Masks of Nyarlathotep, The Grand Grimoire of Mythos Magic, Berlin: The Wicked City, and so on. The art is largely black and white, with a liberal amount of full-page color pieces as well.

Before jumping in I think credit has to be given to line editor Mark Mason for the surprising thoroughness of the 7e setting books. Berlin was astounding in the depth and breadth of detail it gave the "Wicked City," to the extent that someone such as myself--who has visited Berlin but is largely unfamiliar with the city--could comfortably and confidently run a Cthulhu campaign it its Weimar era. Dark Ages is no less exhaustive, not just with maps and histories, but in depth sections on Dark Ages society, literacy, language, and culture. You get a very complete picture here, from taxes and the justice system to the games children play. In my first read through I kept forgetting--until later chapters--that I was reading a Call of Cthulhu book. It felt like a fascinating and immersive history. None of us are going to walk out of Cthulhu Dark Ages with a PhD in the period, but any of us could run a campaign without constantly having to run to the Internet for research. It is really that complete. 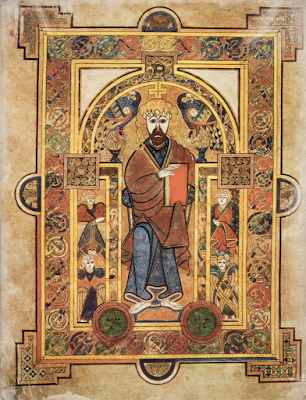 To get this kind of depth though required this edition of Cthulhu Dark Ages to narrow its focus somewhat. While the previous editions were a more general overview of the period, focused primarily on the Continent, this new edition concentrates squarely on Anglo-Saxon England in the century running from 950 to 1050 CE. The first chapter, Anglo-Saxon England, is 34 pages detailing the region, and the eighth, Totburh, presents a fully realized Anglo-Saxon community as the Investigators' base of operations. The choice of Anglo-Saxon England seems a bit of a no-brainer given the tastes and obsessions of Lovecraft himself, and by selecting a single region to focus on, it allows this edition to do what previous ones couldn't...namely give you a living, breathing macrocosm of the period.

Chapter two, however, gives us a much broader look at the period with A - Z of the Dark Ages. The role here is to make it clear to the reader what the "Dark Ages" is, how it differs from the High Middle Ages (the period most gamers, after 40 years of conditioning, are more accustomed to). This was one of my favorite sections, and the one I feel most likely to periodically revisit. The section on "Magic" alone is worth the price of admission, right down to sample folk charms.

Chapter three is Dark Age Investigators, walking us through the process of making Call of Cthulhu characters for the setting. There are a host of occupations suited to the period, from beggars and clerics to free farmers, heretics, minstrels, and warriors, and a large table of "Life Events" that add background color. Perhaps you had the pox as a child, was raised in a monastery, or born under a gibbous moon. There are tons of colorful entries here along with the effects they have on your character. Additional tables present your character's Beliefs, Significant People, Meaningful Locations, Treasured Possessions, etc. All these may be selected or randomly determined. Naturally there are a broad selection of names offered as well.

Then comes a long section of adapting Cthulhu skills to the setting, including new ones. To reflect the widespread illiteracy of the period, speaking a language and reading and writing it are separate things, for example. Melee combat skills are expanded, skills like Medicine more restricted. With a nod to Basic RolePlaying, "Status" replaces "Credit Rating." Investigator organizations also come in this chapter, giving the characters an in-world connection to each other. Finally we find weapons and equipment.

Chapter 4 is the Game System, with some interesting innovations here. Anyone has played Call of Cthulhu knows that at some point ponderous tomes of forbidden lore have to be consulted...but how does this work in a world where most Investigators cannot read? "The Oral Tradition" comes into play here, providing new ways for Investigators to discern critical Mythos secrets from folklore and oral accounts. Combat comes soon after, with a focus on the very familiar RPG tropes of sword, spear, and shield fighting, mounted combat, etc. There is an expanded section on disease.

Finally, as the centerpiece of Call of Cthulhu, "Sanity" is revisited. The more you think about it, the more obvious the need to adapt the concept to the period is. There is no psychoanalysis in the Dark Ages, and indeed in a world where acceptance of the supernatural is rampant, the stressors are very different. Thus we are introduced to the concepts of "Idiocy" and "Lunacy," the four humors and their imbalance, and of how "bouts of madness" might work in the setting. 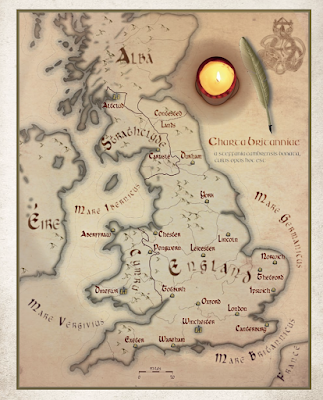 Chapter 5 is Investigative Horror in the Dark Ages. This Keeper-oriented chapter gets under the hood of running a Dark Ages game, with special attention giving to using Oral Tradition in place of the more standard Cthulhu practice of heading to the library. There is also good advice on how not to run the game, to avoid it turning into a medieval fantasy RPG rather than weird horror. Chapter 6, The Cthulhu Mythos in the Dark Ages, broadens the scope well beyond Anglo-Saxon England to discuss centers of Mythos activity across the continent (and beyond). We are introduced to cults active during the period, and how the gods of the Mythos are viewed in the Dark Ages world. For characters who are literate, there is a selection of Mythos tomes around during the period, including occult tomes and poems (think "epic poem" here, the preferred narrative style in the days before novels). There is a long discussion on folk magic and witchcraft, and an extensive list of new spells.

Then at last we come to Chapter 7, the Bestiary. This is where the third edition draws most heavily on the editions before it, with Stéphane Gesbert's terrific menagerie of Cthulhu horrors adapted to this setting, as well as an expanded selection new to this volume. Folkloric beings, such as the dragon from Beowulf or the pre-Dracula vampire, appear as well. I will not be spoiling the surprise, but the book provides its own vampire lord in the personage of a historical figure, a surprise that brought a wicked grin to my face.

As previously discussed, chapter 8 is the Totburh setting, populated by a ton of colorful NPCs. The book concludes with three scenarios, a Glossary, Timeline, Who's Who, and Bibliography.

The creative team here has delivered a terrific product. Both Bowser and Holloway bring academic credentials in the subject to Dark Ages, and the authenticity shows. Newton's storytelling skills give the characters and scenarios here depth, and Mason brings the same skills he did to the 7e rulebook. Call of Cthulhu has been Chaosium's flagship for decades now, and the work being done in its recent projects is as superb as it has ever been (the production values are the best we have seen). Cthulhu Dark Ages is a brilliant addition to the line, a book anyone who loves the game needs on their shelf...well, when it materializes in dead tree form. It has everything the previous edition has and more.