THE COMPANY OF THE DRAGON: CAMP LIFE

THE ORLANTHI ARE NOT a nomadic people, yet neither are they as sedentary as many other Gloranthan peoples. The ancient Vingkotlings, for example, were stationary, with holds and steads firmly established, but their immediate successors were not.  Heort's "Deer People" lived in the mountains and hills outside of the cities and forts, a tactic that kept them alive in the Greater Darkness. Modern Orlanthi blended these two cultures, with Esrolia and Sartar's cities exemplifying the settled patterns and the Pol Joni showing more mobile instincts.

The longhouses, halls, and hill forts of late Third Age Sartar might have had their roots in the Vingkotling stream, but the nomadic lifestyle adopted by rebel forces during the Lunar Occupation (1602 to 1625 S.T.) harkened directly back to Heort. Before coming to occupy (if, in your campaign they do at all) the ancient Vingkotling fortress of Storm's Age (p. 219-226), the Company of the Dragon adopted a lifestyle that their distant Heortling ancestors would have found very familiar.

The practice of establishing camp was ritual, formalized, and rooted in myth.  It began not with Orlanth but Umath himself. First, the recognized leader of the band locates what is to be the center of camp and plants the Law Stone there. This is a sacred stone created at the formation of the band or company and brought with them whenever they break camp and establish a new one elsewhere. The Law Stone traditionally has carvings identifying who the band is, who their leader is, and perhaps most critically who their wyter is. It was not unusual, in fact, for the Law Stone to be the sacred vessel containing the wyter's spirit (see RQ, p. 286).  Once planted, the Law Stone marks the camp as belonging--so long as it remains--to the band or company.  Umath established this tradition, but it is also clearly a reflection of the Spike that stood at the heart of Glorantha.

The highest ranking priest or God-talker among them would then call the Six Guardians to encircle and mark the boundaries of the camp;

Often this was accompanied by use of the Warding Rune spell (RQ, p. 347), but not generally if the camp was being established in the territory of an allied or friendly host.

The next step of establishing camp was a critical one. The Company of the Dragon, like all traveling Orlanthi, would have made use of a "traveling house," a structure not unlike the lavvu used by the Sami peoples of Europe or the tipi of indigenous North Americans.  The skeleton of the structure was formed by three notched or forked poles, arranged like the Movement Rune to form a tripod, with additional straight poles added between to lend support.  Over this was stretched walls of animal hides and skins.  The center of the traveling house was left open to the sky, and on the ground beneath it each one would have a small campfire within.

Along with the Law Stone, the leader of the band or company would carry with them a fired clay box containing a single coal. This was the sacred essence of Oakfed, a Low Fire spirit and brother to Mahome (the hearth) and Gustbran (the forge). In the center of the camp, beside the Law Stone, the leader would then create the Camp Fire. From this, each fire within each tent would then be lit. Hymns would be chanted or sung in memory of Oak Fed helping the ancestors survive in the Greater Darkness. Once the fires were lit, the camp was said to have "woken up," and was considered a temporary yet acceptable surrogate for the hearth fire of Mahome burning at the heart of every permanent Orlanthi dwelling.

On a final note, latrines would have been dug several meters from the edge of camp. The Orlanthi practice was to dig them in the north, likely as a slight to the Dara Happan peoples in that direction. 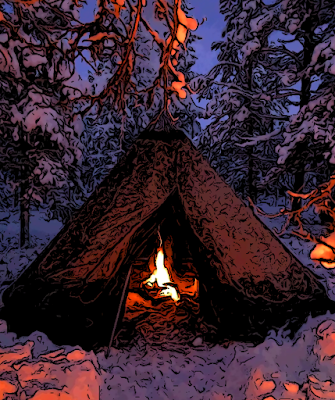 Evenings would be given over to songs, stories, and the retelling of ancient myths. The shift rotation of guards patrolling the outer edges of the camp would have been assiduously observed. Food would primarily be hard, dried breads softened and flavored with gravies made from dried stock, cured meats, beans and lentils, and if they were lucky a bit of beer. If the band was given permission to hunt on the lands it occupied, game might be added to the menu. In general though, within two hours of sunset, the camp would have gone quiet.

Traveling houses were large, and often held up to ten individuals. For the Company of the Dragon, where Companions trained in phalanx formations of ten, the Company would have bedded down in their phalanx groups. Romantic relationships were known and accepted, and would have been quietly ignored by other tent mates.

In the morning the members would rise with the dawn and wash, not just for cleanliness but as a ritual purification washing away any lingering traces of sleep, the "little death." In Sea, Fire, and Earth Seasons the camp would optimally be placed near a source of flowing water for this purpose.  In Dark and Storm Seasons, snow would be brought into the tent to melt overnight in vessels beside the camp fires.  The company would then break its fast, and engage in the militia training or other occupations of the day.

A Word on Hospitality

It should be noted that once the Law Stone was planted and the fires lit, the camp for all intents and purposes belonged to the band or company occupying it. Even if they had been given permission to encamp on someone else's clanstead, by ancient Orlanthi custom and tradition the land belonged to the campers, not the owners. No member of the local residents would enter the camp without announcing themselves and receiving permission first. To do so would have been a serious breech of protocol. Likewise, no party would set up camp on the lands of others without first securing permission, and it was recognized that by encamping on other's lands you established and now owed a debt to them.

"THE COMPANY OF THE DRAGON" IS OUT!

We are proud to announce that The Company of the Dragon was released two days ago and became an instant bestseller, holding the #1 spot not only in Community Content but ALL of DriveThruRPG.

In the shadow of the Quivini, at the dawn of the Hero Wars, a young Seven Mothers convert began collecting stories of rebel warbands hiding in the wilds of occupied Sartar.

Among these accounts were repeated stories of one particular warband... clanless, tribeless, bound to a draconic spirit of immense power. Some called them traitors and insurrectionists. Others painted them as folk heroes and freedom fighters.

They were called the Company of the Dragon. And some say they helped the Prince of Sartar win her throne.

In this 270-page sequel to the Gold bestselling SIX SEASONS IN SARTAR you will find:

- "Sartar Before the Dragonrise," a land culturally and politically divided under foreign dominion.

- "The Company of the Dragon," a description of the Company, the rebel warbands loyal to Kallyr, and a new system to model large communities, keep them healthy and strong, and lead them into large scale battles.

-"Draconic Consciousness," the teachings of the Dragon Way and a Draconic perspective of the Hero Wars.

-"Characters," rules for creating new protagonists, creating and narrating "character arcs." and a shorthand system for NPCs and antagonists, with over 30 templates for quick NPC design.

-"Initiations," a discussion of this important aspect of Gloranthan religions, with example initiations for martial cults like Orlanth Adventurous, Vinga, Humakt, Babeester Gor, Storm Bull, and the Company of the Dragon.

-"Running the Game," an extensive chapter on building campaigns, with expanded battle and community management rules, new options, and a discussion of gaming in Glorantha.

-"Episodes," more than 160 pages of adventures and adventure seeds that allow you to assemble your own 5-year, 27-season saga, with historical events like "The Battle of Auroch Hills" and "The Dragonrise," as well as all-new stories like "The Dark Lord's Daughter" and "The Changeling."

Written for RuneQuest: Roleplaying in Glorantha, but with support for 13G and Questworlds play.

Usuable as a solo campaign or the sequel to SIX SEASONS IN SARTAR.