The Doctor is a Rebel Time Lord Who Outwits Adversaries 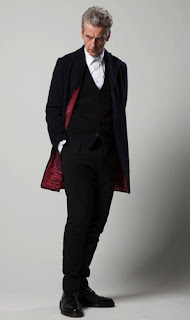 REBEL
You have issues with authority. Willful and independent, you refuse to take orders from anyone but yourself. This quality doesn’t necessarily make you a criminal; you will follow rules and conventions if they make sense to you, but if they don't you have no trouble ignoring them. You may or may not be a freedom fighter, taking on what you perceive as tyranny. Regardless, you likely dress and act with unique style and air, not caring what others think. You gain the following characteristics:

Initial Link to the Starting Adventure: From the following list of options, choose how you became involved in the first adventure.
- You threw in with the other PCs because you saw that they were resisting some form of authority.
- One of the other PCs convinced you that joining the group would be in your best interests.
- You’re afraid of what might happen if the other PCs fail.
- Helping the others inconveniences someone you are opposed to.

Time Lord (Prydonian Chapter)
Are the "Time Lords" a race, or a profession? The television program has never made it clear. Certainly, not all Gallifreyans are Time Lords. In both the classic series and recent episodes, some live comparatively primitive lives in the wilderness outside of the Citadel. This version, then, assumes that Time Lords are not born, they are made by attending graduating the Academy. Obviously, other assumptions are possible.

Based on the Doctor, we might call this the "Prydonian" build (his Chapter at the Academy). Noted for their manipulativeness and political skill, we are suggesting a Speaker with the Technology Flavor.

Regeneration: Time Lords can bear two cyphers. However, we are counting "Regeneration" as one of them. Time Lords are imbued (or promised they will be) with Regeneration energy at several points in the series, and it is clearly something that is expended once used. This ability then is treated as a subtle cypher with twelve "doses." When the Time Lord reaches death, or near death, it can be voluntarily triggered. Doing so simultaneously triggers all remaining recovery rolls in a burst of energy. The character assumes a new appearance (possibly even gender), with a new set of personality quirks. He or she cannot regenerate again until resting and restoring all recovery rolls (thus the Time Lord can still die unless retreating from danger). The power can be used twelve times, after which further regenerations can only be obtained from the Time Lord High Council.

Outwits Adversaries
This is simply "Calculates the Incalculable" with a new name.

TARDIS (Artifact). A time capsule that can travel anywhere in time and space, is infinitely large on the inside, and can blend into its surroundings to escape notice.

Posted with Blogsy
Posted by Andrew Logan Montgomery at 6:45 AM 1 comment:

I don't often run published scenarios or campaigns.  As a gamemaster, I get the same pleasure building my stories from the ground up that players get from making their own characters.  Published scenarios are like pre-generated characters; you can put your own "take" on them, but they are never really going to be your own.  As a kid, of course, I ran things like The Keep on the Borderlands and The Isle of Dread, and later I took a stab at classics like Masks of Nyarlathotep and The Great Pendragon Campaign, but 99% of my games the last thirty odd years were my own invention.

With the Numenera core rulebook adventure "Three Sanctums" I made an exception, not because it is a particularly brilliant scenario (it's good, but not great), but because it clicked into the story of Jihad so well.  Jihad begins with the Amber Pope's declaration of a Crusade against the Gaians, and the mysteries surrounding that.  The Order of Truth claims these simple animists and nature worshippers beyond the Cloudcrystal Skyfields are a threat, heretics who imperil the Nine Kingdoms of the Steadfast and the Truth. Yet anyone who has ever actually been in the far north finds these claims dubious at best.  So are the Order's motivations simply cynical and political?  Is it a scare tactic to strengthen power over the Nine Kingdoms?  Or is there something more to it...

In writing the campaign I decided to give the Order of Truth a "god" of sorts, the Eidolon. When Calaval entered the Amber Monolith he found himself transported to the heart of the Sun, a citadel called "the Throne."  A disembodied intelligence there--the Eidolon--revealed itself to him, taught him the Truth (both the language of the Men Who Went Before and the philosophy of the Order of Truth), and sent him back as the first Amber Pope.  The Eidolon claims to have been created by ancient humans in a previous world, humans whose science made them like gods, and further claims its agenda is to raise men up again to their former state.

Now, in Jihad the Eidolon is not simply an AI living in the Sun...it is the Sun, turned by these ancients into an actual intelligence. It was this decision that made "Three Sanctums" irresistible to me.

In a nutshell, "Three Sanctums" has the player characters robbed by the shadowy Convergence, as the group needs an artefact in the characters' possession.  The title refers to the Convergence's strongholds in the Steadfast, the Empty, Golden, and Scorpion Sanctums.  The characters go in pursuit, ending up at the Scorpion Sanctum.  There, the Magisters of the Convergence are using the stolen artefact to complete the Venerator...a device harnessing the power of something held in a black, room-sized box.  The twist?  The box (like the TARDIS) is bigger on the inside, much bigger...spanning hundreds of AUs (astronomical units) across.  It contains "Bilu-sha-ziri," the red giant star we know as Antares.  At some point in the distant past, the ancients stole the star and tucked it inside this box.  The Magisters think tapping it will give them some sort of ultimate power. 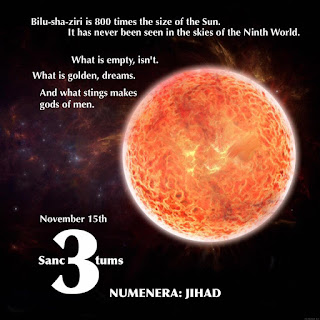 The previous paragraph sums up the published version.  Once I read it, however (and I didn't actually read it until the latter stages of writing Jihad), the Amber Pope's crusade all fell into place.  Ideological rivals of the Order of Truth, the Convergence has been persecuted and hounded for centuries in much the same way the Inquisition hounded heretics.  Despite their own power, they have never been able to get the better of the Order, because the Order has an actual god on their side.  When the Magisters discovered Bilu-sha-ziri, what they found wasn't just a "star."  It was another "uplifted" stellar intelligence, a being exactly like the Eidolon.  They made a pact with it, and the Venerator was a device to channel its power.

Unfortunately for the Magisters, Bilu-sha-ziri was imprisoned in the box for a reason.  Unlike the Eidolon, this stellar AI is psychopathic.  What it really wants is a way out of its prison. 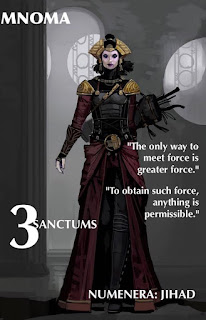 My players and I went through this story in two sessions.  The first, "Three Sanctums," was a straightforward running of the published adventure.  The artefact taken was a bronze automaton in the shape of a young boy, an artificial intelligence the characters discovered back in the first scenario.  The Venerator (in both my version and the published one) currently is powered by human brains, but these are unstable and burn out.  The Magisters need a dependable AI that can bear the strain. 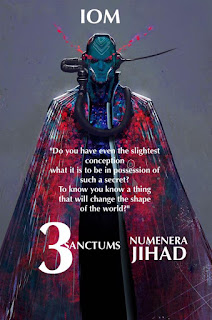 The players go in pursuit.  At the Empty Sanctum they get separated; most teleported on to the Scorpion Sanctum, but the Nano, Emerson, getting transported to the Golden Sanctum.  It turns out the Magisters of the Golden Sanctum are not quite down with the whole plan to harness Bilu-sha-ziri's power, and send Emerson back to help stop them. 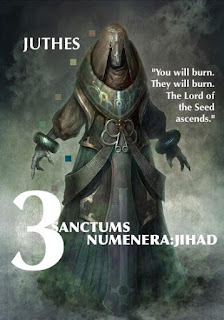 At the Scorpion Sanctum we find our trio of Magister conspirators, Mnoma, Iom, and Juthes.  Mnoma and Iom are still basically following the script; harness the star's power and use it for their designs.  Juthes, secretly, has fallen completely under the star's influence and worships him like a dark god.  He is going along with his cohorts until such time as he can betray them and release his new master.

It doesn't play out this way.  The player characters kill off Iom, who is outside the box manning the Venerator, and then go inside the box to see what it is.  Just as with the published version, getting into the box is easy, but once you do, you find yourself millions of miles from the nearest wall.  The way out is Mnoma and Juthes, who are inside the box.  But at this point Juthes makes his play and the characters end up killing both he and Mnoma...leaving themselves stranded inside the prison with Bilu-sha-ziri... 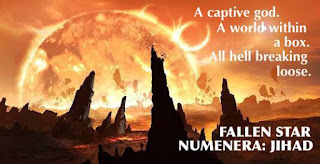 The next session was called "Fallen Star."  With two players unable to make the game (the Nano, Emerson, and the Jack, Myrna) it was time for a clever Intrusion.

The group awakes on the rocky surface of a planetoid in orbit around Bilu-sha-ziri...now near the centre of the box and much farther from escape.  The star itself seems to have brought them there, and its influence over one of the characters--Lugar--is growing.

Lugar, an outlander barbarian from the Cloudcrystal Skyfields, was created with the "Knows Too Much" focus from the sourcebook, Celestial Wisdom.  In essence, at some time in the character's past he fell under the influence of a god who is guiding him towards some purpose.  Our basic understanding was that this god was Vajra Ajar (see the photo below).  But now, in flashbacks, we see that the boy Lugar was left raving and mad after his encounter with Ajar...until a young Magister from the Scorpion Sanctum, Mnoma, came to collect him.  The god guiding him has been Bilu-sha-ziri all along. 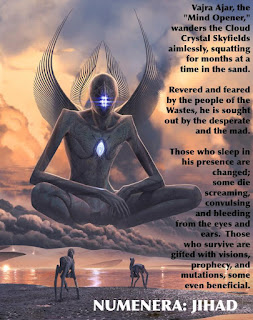 The party is led to caverns beneath the planetoid's surface, where they are eventually attacked by nasty, spider-like robots.  These turn out to be the defence mechanisms of another Magister, Uwan, who opposed Juthes, Iom, and Mnoma and was imprisoned here in the box as a consequence.  He has a way out, but needs their help.  Working together they escape...

Re-emerging, they find the Scorpion Sanctum under attack by the airborne Angulan Knights.  The Order has made an alliance with these racial purists, and they have expanded their attacks from mutants and abhumans to heretics as well.  They have devastated the Sanctum, and it looks like the player characters have gone from frying pan to fire. 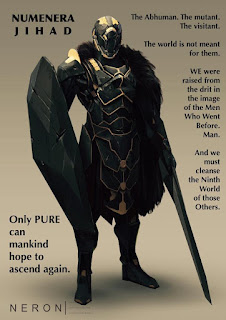 Until Uwan simply waves his arms and all the Xi-Drake riding knights fall burning from the sky.  Uwan reveals his true nature--he is none other than Bilu-sha-ziri himself in a synthetic humanoid vessel.  He thanks the players for liberating him, promises to not "forget" them, and vanishes.

The player characters, then, are the harbingers of the Apocalypse.  The Amber Pope's Crusade was based on the Eidolon's projections of a godlike power rising in the North to challenge the Order.  Now that Bilu-sha-ziri is free, he is heading north to fulfil that prophecy.

And Jihad shifts into high gear.

Posted by Andrew Logan Montgomery at 9:31 PM No comments: