THE COMPANY OF THE DRAGON, AN UPDATE

As J.R.R. Tolkien phrased it, "the tale grew in the telling."  The project started as one thing, but then just kept growing and growing and growing.  Now, as Six Seasons in Sartar: The Company of the Dragon nears completion, I thought it would be a good time to pull the curtain back on the campaign and let you know just what you have in store for you.  We are in the layout and art stages right now, adding some final material and a fresh new chapter I hadn't planned on including, but decided it needed, and am looking towards a mid-January release date.  I will keep you posted if there are any delays.

The Company of the Dragon is the sequel to Six Seasons in Sartar, but we have spent a lot of time and effort making sure you can run it as its own campaign, without ever having played Six Seasons at all.  If you did play Six Seasons, then The Company of the Dragon will tell you what happens next.  Your Six Seasons player characters will become the main protagonists of this saga, and you can bring along any of the NPCs who survived the Battle of Black Stag Vale as well.  If you never played Six Seasons, you and your friends will sit down and create brand new characters for the campaign.

The story follows "the Company of the Dragon," one of the rebel warbands operating in Sartar between Earth Season 1620 ST and Kallyr's ascension as Prince in 1625.  Traditionally, the Orlanthi warband was a group of young men following Orlanth Adventurous and fighting women following Vinga sponsored by their clan and overseen by the Orlanth Rex cult.  The warband's actions were sanctioned and given legitimacy by this oversight.  They quested, conducted cattle raids, fought Chaos, all on behalf of their clan and their chieftain.  With the Lunar Occupation, however, the Orlanth Rex cult was banned, leaving warbands across Sartar without guidance, authorization, or control.  Some turned to banditry.  Some became mercenaries.  But some took a different route.

Kallyr of Kheldon, in exile since leading a failed rebellion against the Empire in 1613, saw in these warbands an opportunity.  As holder of the Iron Torc, Kallyr is the High Priest of Orlanth Rex, and she reached out to the leaderless warbands of Sartar offering them a deal.  If they fought for her, under her authority, she would grant them the sanction and legitimacy the Orlanth Rex cult offered of old.  This gave Kallyr a private army of rebels scattered throughout the hills of Sartar.  For the warbands, it was a lifeline.

Because Sartar before the Dragonrise is a nation divided against itself.  The tribal kings and queens, as well as the cities, have largely accepted Prince Temertain and Lunar rule.  Many of them profit from it, in fact, now having access to a far larger network of trade routes than ever before.  The clans living amongst the hill tribes of Sartar, however, cling fiercely to the Old Ways.  In their eyes, Kallyr is the legitimate Prince of Sartar and Temertain a pretender.  The warbands operating in her name thus gain aid, support, and comfort from the hill tribes, while in the cities they are viewed as bandits and terrorists.

If you are coming from Six Seasons in Sartar, the Company of the Dragon is composed of the surviving Haraborn, joined by the Third Wind and other rebel groups operating in Kallyr's name.  These are all united, and forged into a new community, by the Draconic spirit Shah’vashak the Rainbow Wyrm.  Discovered imprisoned in a Second Age EWF temple, Shah’vashak is a severed piece of the Brown Dragon's soul.  Kallyr needs it, and the other severed pieces, to awaken the Brown Dragon as a weapon against the Lunars, but Shah’vashak has its own plans.  The Company of the Dragon introduces a new twist on an old Gloranthan myth, and a unified vision that ties together the constellation Orlanth's Ring, the Dragonrise, Argrath, and the end of the Third Age...

If you are new to all this, the book will walk you through creating your own Company, where they came from, and how they met the Rainbow Wyrm.

The campaign consists of 23 possible adventures, one per season.  The book gives you, however, more than 50 episodes which can be used to fill these slots.  Episodes can be combined or run on their own, which means with 23 openings and over 50 choices, no two campaigns need play alike and you can replay The Company of the Dragon differently each time.

The timeline is likewise divided into three phases; "Guerrilla War" in which the Company is always on the move, hiding out in the hills and striking at the Lunars every chance that they get; "The Great Winter," in which the Company has the chance to secure a base of operations and faces the challenge of helping its allies survive the darkness that descends in the wake of Orlanth and Ernalda's "deaths," and "The Dragon Rising" which brings the Company back into Kallyr's path as she needs them to awaken the Brown Dragon and liberate the land.

Along the way the player characters have the chance to tangle with Delecti and Sir Ethilrist, to negotiate with Mostali, Uz, and Aldryami, to participate in the Battle of Auroch Hills and witness the Dragonrise.

The Company of the Dragon introduces a simple, streamlined resource management system which allows the players to govern the warband, use its power to create changes in the world, and puts them in the position of having to strengthen and maintain it.  It also introduces Draconic Conscious, a form of Illumination taught by Shah’vashak the Rainbow Wyrm. Also included are "Character Arcs," a simple narrative system that shifts the spotlight from character to character over the campaign as they pursue their own personal development and goals, and expanded use of "Character Ratings" or "CR" from Six Seasons in Sartar.

I will be looking more closely at aspects of the campaign as the release date approaches.  Stay tuned here for additional information and sneak previews. 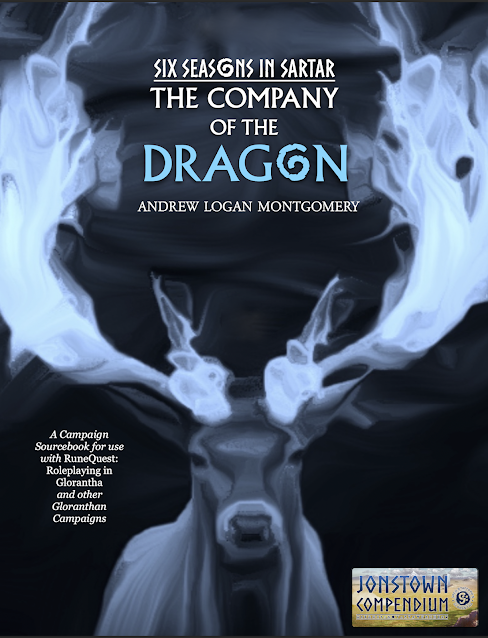 Posted by Andrew Logan Montgomery at 1:21 AM 2 comments:

LIFE OF MOONSON, BOOK ONE: CHARACTERS - A LOOK 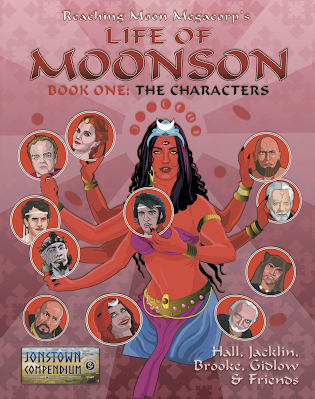 THE ARGUMENTS GO BACK forty years.

You have the Roman Camp, who will point to the Imperial legions, the liberal use of terms like "centurion" and "tribune," and the existence of a Senate. Obviously this makes Sartar Gaul or Germania...possibly even Judea.  Then you have the Persian Camp, who remind you of the Satraps and sultanates. This casts Sartar in the role of the brave Greeks holding off the forces of Xerxes I. There is a Byzantine Camp, who point out the existence of a state religion that is keen on conversion, a Soviet Camp who view the insidious spread of "Illumination" as a euphemism for Communism (not to mention, the empire is "Red"), and even a Star Wars "The Empire" Camp...because let's face it, there is something rather Death Star-like about the Red Moon just hovering there. Each side, given the chance, has made convincing cases initially around gaming tables, then later message boards, and nowadays the Internet.

Of course the real answer is simple. The Lunar Empire is all of these things. 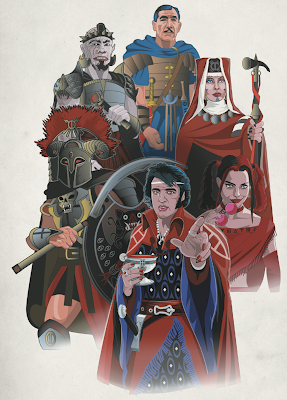 In a world based on myth, the Lunar Empire is the archetypical Empire, a mold into which you can pour any empire you like (or dislike, for that matter). Alternatively, if you are the team that put together 2020's A Rough Guide to Glamour, you cram that mold close to bursting with every single empire you can think of. Glamour served up a Lunar Empire that was simultaneously Rome, Byzantium, Moscow, Britain, Palpatine's, and more than a little Oceania, spiced up with pop culture and humor, and served hot in the Jonstown Compendium. Now the band is back together for Life of Moonson, Book One: Characters.

Both A Rough Guide and Moonson originated with a LARP run at Gloranthan conventions in the late 1990s. It was a strange period of history for "Glorantha in the real world," when the setting had just split from RuneQuest but had not yet been reborn in Hero Wars (later HeroQuest). Yet this LARP played a crucial role in assembling the Avengers, the people who would become--in the words of Jeff Richard--"a veritable Who's Who of the modern Team Chaosium." So it felt "right" for a Rough Guide to be expanded, illustrated, and published for the new Jonstown Compendium, and it feels right for the Life of Moonson books to follow it now. 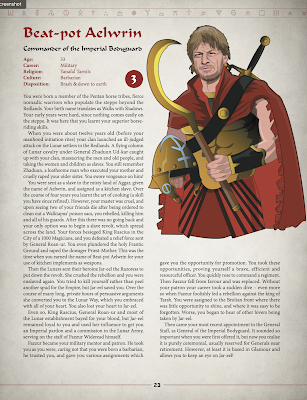 While A Rough Guide detailed the setting of the LARP--the Lunar Empire's capital of Glamour--this volume, Characters, contains more than 50 characters for it, each illustrated, with pages of description  background, personal objectives, secrets, and things the character knows. There are no game statistics here, but the characters are so complex and fleshed out that adding a few for RuneQuest or QuestWorlds would be well worth your while. These are the movers and shakers of the Lunar Empire. the heaviest of the heavy hitters. Within you will find the Red Emperor himself, Sor-Eel, the Great Sister, the Dean of the Field School of Magic, even Jar-Eel the Razoress. This makes it invaluable to anyone wanting to run a campaign in the capital, or at the highest levels of the Empire. For the rest of us, its just makes for damn juicy reading.

The production values are upped here from A Rough Guide, which is actually saying something as that book set the bar for other Compendium works. The writing team of David Hall, Kevin Jacklin, Nick Brooke, Chris Gidlow, the notorious MOB (Michael O'Brien), and Mike Hagen are joined by illustrator Dario Corallo, whose art so perfectly matches the spirit of the book. As with A Rough Guide, Moonson portrays the luminaries of the Empire in the guise of famous actors, performers, and artists we all know. I will leave it to you, gentle reader, to identify them all at your leisure. 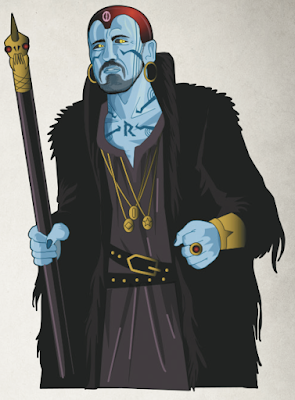 At 235 pages Life of Moonson is massively expanded from its original source material, with new essays  and maps courtesy Phil Anderson and Nick Brooke. Book Two: The Rules, is on the way and will deliver the basic story of the LARP (seven years after the Dragonrise, the great and the good of the Empire have come together the celebrate the Lunar New Year...), the rules, and tools needed to run it.

Even if you have no intention of playing the LARP, Life of Moonson belongs in your collection along with A Rough Guide to Glamour. LARPs have never been this reviewer's cup of tea, but I still find both books terrific RPG references. Like so much from the Compendium they are passion projects, and it shows. They also shed light (scarlet, crimson, and vermillion light, of course) on a part of Glorantha we don't often get to see.

Life of Moonson is available now in PDF from the Jonstown Compendium.  Buy a copy, and help it get past the threshold for print on demand eligibility.

Posted by Andrew Logan Montgomery at 4:35 PM No comments: