A ROUGH GUIDE TO GLAMOUR: A REVIEW

Note: In the spirit of full disclosure I received a free copy of A Rough Guide to Glamour back in March for the purpose of doing this review.

Any rumors of my being entertained by naked, "gazelle-hipped boys" in the City of Dreams in exchange for a favorable review are mendacious lies spread by those disloyal to the Emperor.

All Hail the Reaching Moon! 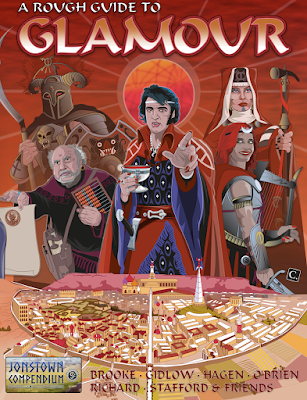 GLORANTHA IS MANY THINGS. It's a Bronze Age game setting with a strong anthropological bent. It's a mythological world steeped in Joseph Campbell, Georges Dumézil, and Mircea Eliade.  It's a neo-traditionalist artifact designed to recall ancient epics like the Iliad, the Mahabharata, or the Enuma Elish.

And it is a world with Ducks.

Not ducks with a lower case "d," Ducks like Howard, Donald, and Daffy; bitter, emo Ducks that brood like Bogart in Casablanca.  It's a world where you can be hired by fish, eat at Geo's, and a race of humans are kept as cattle because they lost an ancient bet.  The world is flat, it's made of Runes, and heroes come back from the dead so often it would make Jean Grey blush.  Essentially, Glorantha is very much a product of the time and the place where it originated, northern California in the late 60s and early 70s.  It is a martini mixing equal parts deep and at times pretentious academic speculation with trippy, counterculture nonsense.  Shaken.  Not stirred.  Served with a twist.

A Rough Guide to Glamour is the perfect microcosm of all this.  It's epic, mythic, quasi-historic, and profoundly ridiculous.  The Emperor looks like Elvis, the official dialect sounds suspiciously like Orwellian Newspeak, and the goddess of the capital (the titular Glamour) might be Debbie Harry (serenaded by lyrics from the Eurythmics).  And I haven't even mentioned Pelorian Rhapsody yet.  If I had to "elevator pitch" the thing to you I would describe it as the Punica meets the Illuminatus! trilogy.

In short, it is brilliant. 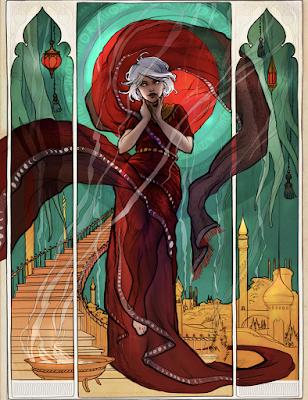 Written by Chris Gidlow, Mike Hagen, Nick Brooke, Michael O'Brien, Jeff Richard, and Greg Stafford (with help from others), and illustrated by Antonia Doncheva, Dario Corallo, Simon Bray, Julie Hudson, BA Wayne, Dan Barker, and Gene Day, this release for the Jonstown Compendium is a hallucinogenic love letter to that other side of Glorantha, not the dense donnish textualism of The Glorious ReAscent of Yelm or the Entekosiad, or the Jack Webb "just the facts ma'am" approach of The Guide to Glorantha.  A Rough Guide to Glamour reminds you that whatever Gloranthan game you play, it exists in a setting where one of the most epic adventures ever was protecting a giant baby in a cradle.

Originally released in a 40-page booklet form back in 1997, Glamour is a 113-page full color PDF (at least in the form I am reviewing it in).  The book details the capital city of the Lunar Empire, built on the edge of the Crater left behind when the Red Goddess gathered a mantle of earth around herself and ascended into the Middle Air as the Red Moon.  There she hovers, looking down on the city her son, the Red Emperor, built in her honor, and over the Empire that spread out from it.  To found this metropolis--one of the greatest cities in the world--the Emperor courted the nymph Glamour, the genius loci of the region.  Glamour was the daughter of Tylenea, the Mistress of Illusion.  The city she and the Red Emperor built together is a dream made flesh, the philosophy of the Lunar Way written in stone.

Glamour--the city--is fantasy gaming's answer to Indraprashta, the capital city of the Pandava brothers in the Mahabharata.  Built by Maya, the god of both Illusion and Magic, the Mahabharata describes it as;

How to convey, when one only has words,
the transcendental beauty of the building?
Decades afterward, old men would tell
how seeing the great hall at Indraprashta
had changed them, changed the meaning of the word
"beautiful"

Marble that looked like water, artful stairs,
ponds so clear and still them seemed like stone,
painted roses asking to be picked,
jeweled flowers among real lotuses.
In this way, the inspired architect,
invited visitors to be alert,
the reflect on the nature of illusion.

The reason I go out of my way to mention this is that Glamour, the city, and A Rough Guide to Glamour, the book, are both the Mask and the Mirror that the Red Goddess claims to be.  Hinduism describes reality as "the play of Maya," a double-edged illusion.  The Lunar Way taught by the Red Goddess is a fictional reflection of this, and the Goddess incorporates all contradictions in her.  To devout followers of the Lunar Way, Glamour is a warm buzz, the dizzying hormonal bliss of being a teenager in spring.  To those who oppose her, it is three AM at the club when you have vomit on your shoes, too much vodka in your bloodstream, and you are starting to come down hard off the high.  A Rough Guide to Glamour is a lot like this; if you are down with the silliness, if you "get" the Ducks and cradles and talking fish, the book is a terrific laugh and a teachable moment in the nature of the Lunar Way.  If you never cared for the way out flippancy of some of Glorantha, this might not be the book for you.  In the end, though, Maya (and the authors) are asking you to reflect on the nature of illusion...namely, where does the silliness in Glorantha end and the mythology begin?  The world is a freaking cube, after all.  Seen from one angle, it is all sublime, and from another, absurd. 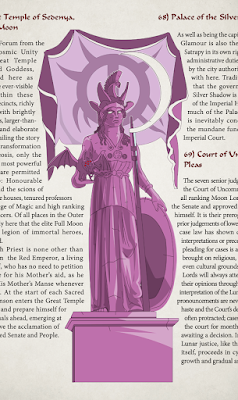 The book details the city of Glamour, its history, neighborhoods, and main attractions.  A lot of this heavy lifting comes courtesy of Mike Hagen and Chris Gidlow, who provide a thorough description of the city and her history.  RGtG discusses New Pelorian, the language of the Lunar Empire, contains the cult write-ups of both the capital's founders (the Red Emperor and Glamour herself), and talks about the important inhabitants of the city and the heroes of the Empire.  It looks a great deal like your typical gaming sourcebook in this way.  You could easily use it to set games, even campaigns, in the Lunar capital.

Fitting, however, for the capital of a Goddess who embraces madness, Chaos, and Illusion, a great deal of the book is winking at you.  Gidlow's Let's Speak New Pelorian! for example is an obvious wink and nod at Orwell, but at the same time is telling you something very true about the Empire.  The illustrations in the Very Important People in Glamour section might look suspiciously like Elvis, a certain actress who played Vanessa Ives, or another who played Hela in a Marvel movie (among others), but this is drawing comparisons between them.  The spirits of reprisal in the Red Emperor's cult might make you cringe...but they also make sense.  Jeff Richard's Glamour: Goddess of the Capital of the Lunar Empire cult write up will bring a grin to the faces of 80s New Wave fans--or gods help us 90s British Pop and Snow White--but captures the hallucinatory experience of the cult.  And what can I say about Nick Brooke's Pelorian Rhapsody?  Only that I am not altogether certain Freddie Mercury was singing about the apotheosis of the Red Goddess...but really, who knows?

My gut tells me this might be a slightly controversial entry in the Jonstown Compendium, but hey...what fandom out there these days isn't divided over that is canon and what isn't.  The right people are going to grok this, and in the end that is the audience the book is seeking.  YGWV, and if your Glorantha doesn't include Ducks because they offend your sense of dignity, you might want to give A Rough Guide to Glamour a pass.

The rest of it will read it and add percentiles to our march towards Illumination.

Posted by Andrew Logan Montgomery at 12:27 AM