SIX SEASONS IN SARTAR: A PREVIEW

WE DON'T USUALLY DO "PREVIEWS" HERE, rather the opposite!  But Six Seasons in Sartar is coming soon to the Jonstown Compendium, and I thought it might be useful for readers of this blog if I talked about the book and what you can expect from it.  Included are some screenshots of the unfinished text. 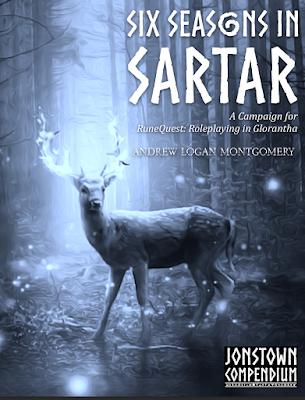 Six Seasons in Sartar, a sourcebook and campaign for Chaosium's RuneQuest: Roleplaying in Glorantha (and other Gloranthan games) is based on the late Third Age poem of the same name.  Said to have been composed by Usuphus of Jonstown—also known as “Bronzeface” for the bronze mask and beard he wore after his disfigurement in Starbrow’s Rebellion—this epic consists of roughly ten thousand rhyming couplets, further divided into quarter-verses of eight syllables each.  The original, written in Southern Theyalan, relied heavily on alliteration, and in keeping with Heortling custom would have been sung or chanted.  No copies of the original are still extant, though we have translations into later languages.

Set in 1619 ST, Six Seasons in Sartar chronicles the last year of the Haraborn, the 13th clan of the Colymar tribe, before their brutal extinction.  It follows a group of young Heortlings just come of age, as they arrive at the crossroads between their idyllic childhoods in an isolated mountain valley and the coming storm of the Hero Wars.  The book is still in layout, and getting new pieces of art, but so far it looks to weigh in at around 150 pages and will be available by mid-May.  It is, of course, a campaign book, meant to help you launch your own Gloranthan sagas, but there are a lot of rule suggestions and ideas you could easily port into your own campaigns. 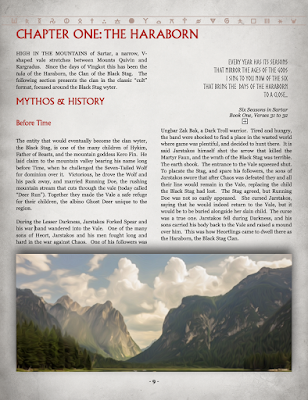 Inside the pages of this book you will find;

The Haraborn: Here we introduce the Haraborn tula, their clan wyter, the chieftain and his Ring, the mythology and history of these people, and a special section on Heortling ritual practice, including details on prayer, sacrifice, and worship.

Some Thoughts on Heroquesting: This chapter contains a complete system for three different types of heroquest.  The rules are used in this campaign, but could be used to design heroquests of your own.

The Riddle: This chapter holds a complete adulthood initiation rite for female characters, useable either as a one-on-one heroquest, a scenario for the group, or just as background material for female player characters.  It includes thoughts on Glorantha pregnancies and menstruation.

Rites of Passage: Set in Sea Season, 1619, this is the male adulthood initiation, ready to be run as a group heroquest, or as background for male player characters.  It contains ideas on what adulthood in Glorantha “means,” and the awakening of magic and Runes.

In Sheep’s Clothing: A scenario set in Fire Season, with details about summer festivals and possible romantic interests for the characters.  The main story follows the appearance of a ghost to one of the player characters, and their subsequent attempts to solve the mystery of his death.

The Deer Folk:  A scenario set in Earth Season, it contains details about Heortling harvest festivals and continues the romance subplots.  In the main story, the arrival of a Lunar tax collector leads to a death sentence, and involves the player characters with a network of Sartarite war bands hiding in the hills and waging a guerrilla war against the Empire.

The Taking: In the middle of Dark Season, a loved one is abducted, and the player characters mount a rescue attempt that will change their destines forever.

Starbrow: Set in Storm Season, the arrival of the rebel queen, Kallyr of Kheldon, tangles the player characters up in the ambitions of this hero, and puts the entire clan in danger.

When All Is Lost: In Sea Season, 1620, a stunning betrayal brings the Lunar Empire crashing down on the Haraborn, and the player characters have their first taste of war.  The campaign comes to a close as our protagonists grapple with the loss of all they hold dear.

What Comes After: Here we have advice and suggestions on where the campaign might go from here, and how to use Six Seasons in Sartar as a springboard for your own saga.

Episodes: This chapter contains a dozen or so mini-adventures or “side quests” that could be dropped anywhere in the main campaign, or developed further into full play sessions in their own right. 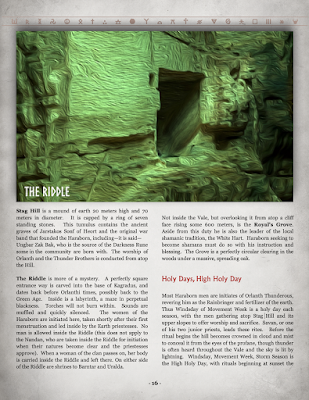 Posted by Andrew Logan Montgomery at 1:31 AM

What I'm Working On 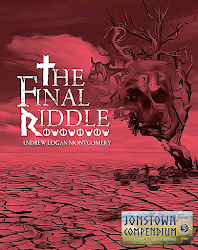 And Later this Year...