"MY ORLANTH DOESN'T HAVE FOUR ARMS"

THE CIMBRI WERE a Germanic tribe, originating on a northern European peninsula the Romans called Cimbricus Chersonesus.  Today you will find Denmark there (well, the continental portion at least).  By 100 BC the Cimbri had, for whatever reason, migrated, and were raiding France, Germany, and northern Spain and Portugal. Eventually they made it to Italy and started tangling with the Roman Republic.  They lost.  The Greek geographer and historian Strabo (63 BCE - 23 CE) described Cimbri men as ferocious berserker warriors who did not fear death, and gave very detailed descriptions of how their priestesses slit the throats of prisoners in sacrifice to their gods.  It's tempting to dismiss this, but there is some archaeological evidence that bears this out.

We don't know a tremendous amount about Cimbrian gods, but a later Roman cult complex near Heidelberg gives us a few hints.  The complex, which dates to the 2nd and 3rd centuries CE, contains inscriptions to Mercurius Cimbrianus, or "Mercury of the Cimbri."  Curiously this figure seems to have been the chief of their pantheon, something that could hardly be said of Mercury.  Yet Tacitus, writing a century before this cult complex was built, also identified Mercury as the chief god of the Germanic peoples.  He was called Mercurius Rex.  Even more strangely, he was a bearded patriarch rather than a lithe, pre-teen boy.

Do these look the same to you?  They did to the Greeks and Romans.

By now you see where I am going with this; they were calling the Germanic god Odin (Woden, Wotan, etc) by Mercury's name.

This was a very Roman--and even Hellenic--thing to do.  The Romans saw Mercury in the stooped, gray-bearded, one-eyed Odin the same way the Greeks had seen it in the ibis-headed Egyptian god Thoth.  In fact a bewildering panoply of diverse gods ended up associated with Mercury/Hermes, all across Europe and the Near East.  Nor was this limited to Mercury; the Romans and Hellenes did it with all their gods.  It didn't particular matter to them how a deity was depicted.  They were looking at something deeper.  They were looking at what the god meant.

Mercury, Thoth, Odin, Lugus, etc et al were gods associated with communication and language, and thus in the classical mind, they were one and the same.  It didn't really matter what the god was called, what his local myths were, or what he looked like.  They knew the identity of the god by his essence. 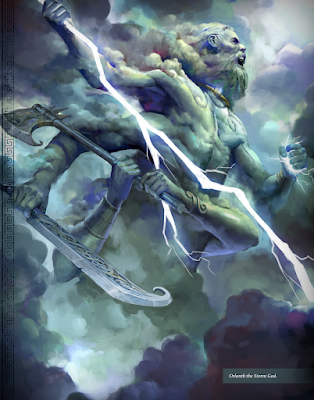 In March of 2018 I reviewed The Glorantha Sourcebook, and something rather curious began to happen.  Not really even thinking about it, I had selected a few pieces of art from the book to show my audience, and started to receive some very irate comments about, well...Orlanth.  Now, for the one or two people who might have stumbled in here thinking it was a dissertation on ancient European religions, Orlanth is a fictional deity, a creation of the late Greg Stafford for his world "Glorantha."  He is very much the Indo-European thunder god we see in deities like Indra, Zeus, Jupiter, and Thor, both the king of the gods and the deity of storms.  He is the chief of his pantheon, and the central deity (with his wife the Earth goddess Ernalda) of a barbarian people.  The messages I was receiving basically told me that the deity depicted in these pictures was not Orlanth, could not be Orlanth, and were all wrong.

The problem was the number of arms. 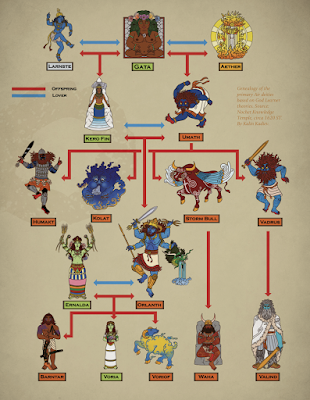 Orlanth's family tree.  He's the blue one with the four arms.

Somehow, in the intervening centuries between the classical period and the modern world, we had gone from looking at a bird-headed god and one that looked like a shepherd boy and recognizing the same deity--despite totally different names and mythologies--to getting bent out of shape that a fictional deity--with the same name and the same mythology--had the wrong number of arms. 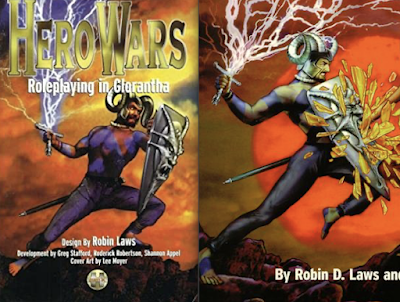 Now, to be fair, Orlanth generally had been depicted with two arms in older games.  He had also been depicted in a unitard. Call me crazy, but I will take super-cool multi-armed Orlanth over Slim Goodbody Orlanth any day of the week.

Levity aside, however, what we are seeing is fifteen centuries of monotheism at work on the Western mind.  For nearly two millennia we have had institutions not only define deity for us, but teach us that any deviation from the authorized and sanctioned depiction of deity is wrong.  In many cases deviation was not just wrong, it was heresy.  Entire wars have been waged over the smallest details of mythological minutia, so it comes as little surprise that our reflex is to embrace what we have been taught about a deity initially, and reject anything that comes after which doesn't fall in line with that.  This knee-jerk orthoodoxy bleeds into new "religions" as well...how many Internet battles have been waged over how the new Star Wars movies are not Star Wars or how Discovery is not Star Trek.  We have gone a full 180 degrees from the classical impulse to see commonalities in deities to picking apart the differences.

The supreme irony, of course, is that this is a game about Bronze Age peoples.  Your typical Gloranthan would look at multi-armed Orlanth, two-armed Orlanth, shrug, and ask what Runes each was associated with.  Air, Motion, Mastery?  Yup.  Both Orlanth.

Subsequent conversations about these depictions of Orlanth--and certain other Gloranthan deities--reveals another layer of the issue.  There seems to be a certain feeling that these recent depictions of Orlanth look too...Indian.  This doesn't particularly bother me; really, if you are a student of comparative mythology, Orlanth reads far more like Indra than he ever has Thor.  This aside, though, it is clear that Stafford's deity is conceived of as a sort of proto-Indo-European chieftain god, so it is not wrong to see Zeus or Thor or Perun in there as well.  If, like me, you met Orlanth way back in the beginning, when Glorantha leaned more towards Conan and the Iliad than Celtic or Norse myth, you are probably more inclined to shrug recent depictions off.  Unfortunately, there was a long middle period of Glorantha were Orlanth was looking rather...Aryan.  And I don't mean the ancient India kind; 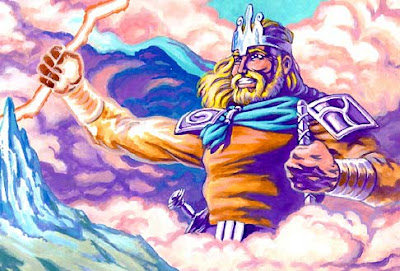 Or being very clearly associated with Odin; 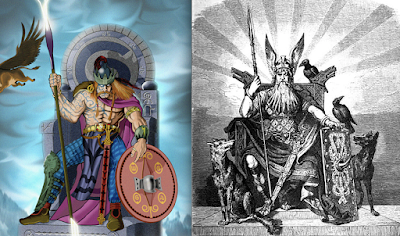 If you had first encountered Orlanth in this mid-stage, I can easily see why the more recent depictions might throw you (from an upcoming Chaosium publication); 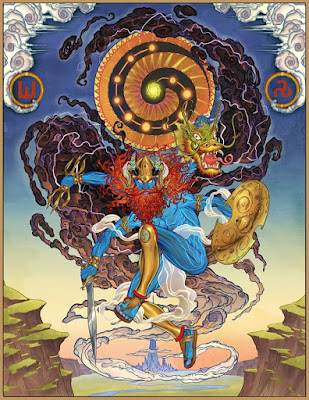 Yet if we step back a moment and look at Fetisov's frankly stunning portrayal of Orlanth, what immediately comes clear is that this is not Indian, nor is it Aryan, Germanic, Celtic, or Greek.  Whereas the previous two illustrations seem to be telling us "Yes, this guy is called Orlanth but he is basically just Odin or Thor," the Fetisov depiction might be the first I have seen that visually expresses what Stafford's Orlanth was meant to be.  That shield design is very Celtic, like the famous Battersea Shield.  The greaves are very Greek.  That red beard immediately suggests Thor for people who prefer mythology to Marvel comics.  The dragon head could be Chinese, but looks suspiciously Persian.  The vajra he is holding suggests India.  In short, this is not an Orlanth that settles for being North European or Indian or Greek.  He is all of the above and more.

There were never any real pictures of Orlanth back when I started playing in 1983, and in retrospect that might have been a good thing.  I always had a fixed image of the Orlanthi as Howard's Cimmerians with Orlanth as a sort of brooding Crom.  By the time game lines like Hero Wars were making very clear Celtic and Germanic references, I had already gone through graduate school, where I discovered the Indo-Europeans and formed my own image of Orlanth and Dragon Pass. In fact I can specifically recall a rant of mine circa the early 00s that the Orlanthi were NOT land bound Vikings (I have mellowed since then).  In the end what I suppose I am suggesting here is that we take a cue from the setting we are playing and the time period it is set in.  In some ways, the people of the ancient world were far less silly than we are.  I have this mental image in my head of a 21st century student sitting on the floor of the Library of Alexandria with his tutor; "But Hermes doesn't look like a baboon, they can't be the same god."

It ends with the tutor smacking the student over the head.