CTHULHU DREADFULS: THE WYSTDOVJA VALE GAZETTEER and KISS OF BLOOD, a Pair of Reviews

STARTING WITH FRANKENSTEIN in 1931, Universal undertook the creation of a bizarre little pocket reality.  It wasn't intentional, not at first.  It simply cut costs to recycle the same sets and props.  Frankenstein, Dracula, The Wolf Man, and to a lesser extent The Mummy cobbled together a black and white Europe where everyone spoke English, used German place names and titles, and the date was somewhere between 1890 and 1940.  As the sequels rolled out and all the crossovers began, the universe became ever more interconnected.  Dracula had a daughter, Frankenstein had a son, and by the end films like House of Frankenstein and House of Dracula had all the monsters teaming up.

A decade after Bud Abbott and Lou Costello sent all these monsters to a shameful and embarrassing demise, Britain's Hammer Film Productions resurrected the dead.  Kicking off again with Mary Shelley, The Curse of Frankenstein, The Horror of Dracula, and The Mummy used the same trick and even improved on it.  Here again was a weird shared universe, still English-speaking with oddly German peasants and villages, but this time more confidently gothic.  The date seemed firmly 188x.  Tame by modern standards, but infamous at the time for their sex and gore, for the true horror aficionado the Hammer films were pure gold.  With talents the like of Peter Cushing, Christopher Lee, and Ingrid Pitt, they were delicious cocktails of camp, melodrama, and terror. 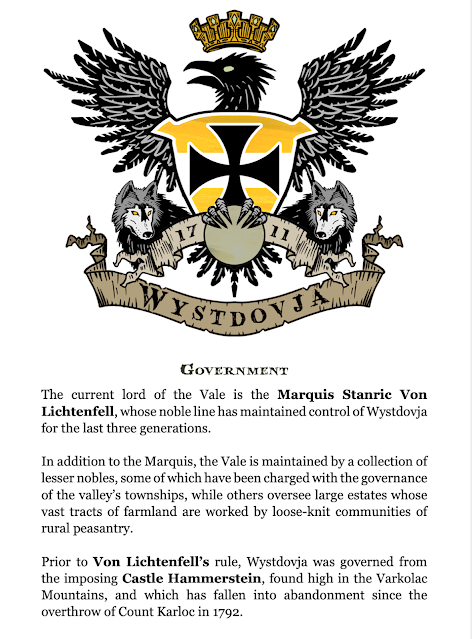 The first attempt to capture the magic of these films in a roleplaying game was probably Pacesetter's Chill (1984).  A more direct attempt came with the game's second, Mayfair edition; the Chill Companion included horror "subgenres" to customize the feel of the game, and included both Universal and Hammer lenses for it.  In 1990, Chaosium winked at the genre in their Blood Brothers, but it was really TSR that same year which jumped right in with Ravenloft: Realm of Terror.  This was, quite literally, a pocket dimension, peopled with residents and horrors that would have been quite comfortable on a Hammer film set.  It almost lured me to play AD&D.  Almost.

Now I haven't written for Chaosium's "Miskatonic Repository" yet...the "Jonstown Compendium" keeps me too busy.  Both are outlets, however, for fans of Call of Cthulhu and RuneQuest respectively to publish their own original works.  If I had written for Miskatonic, I might have done something very similar to The Wystdovja Gazetteer and Kiss of Blood.  Because the "Brinoceros" (I shall assume the alter ego of Brian Brethauer), along with Kevin Brethauer, Amanda Brethauer, Cody Chavez and Amanda Gutowski, has produced a pair of perfect little love letters to Hammer horror for Call of Cthulhu, exactly the sort of thing I would have liked to have done. 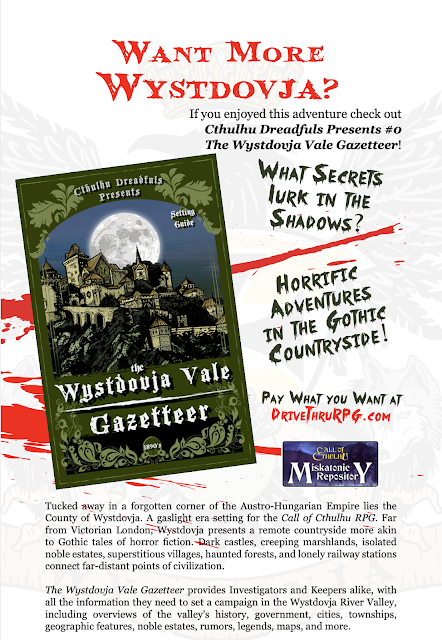 Set in Cthulhu's "Gaslight Era" (circa 1890), The Wystdovja Gazetteer removes us from London to Wystdovja (wist-DOE-vee-ya) Vale, a broad river valley surrounded by jagged mountains and situated in...well...Hammer film country of somewhere between Austria and Transylvania. Instead of setting your tales in Arkham, Dunwich, or Innsmouth, Wystdovja brings you Skeltzenberg, the seat of culture, power, and commerce in the Vale, decayed Middenport riddled with crime, and idyllic Karoczig.  And in-between these, the Gazetteer tells us; 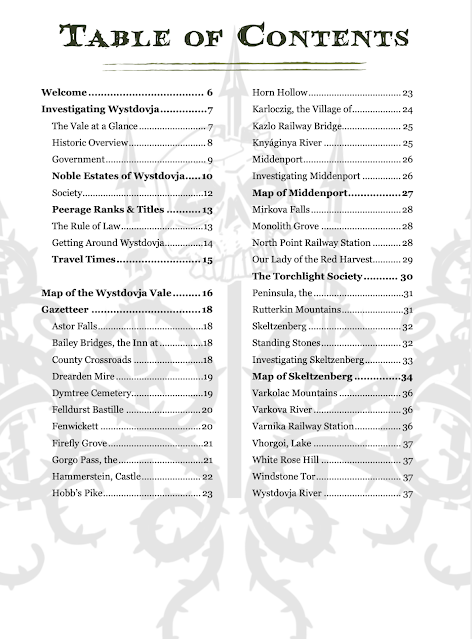 This 40-page PDF covers a lot of ground, describing the history of the region and the key locations in it.  It is more suggestive than exhaustive; don't expect street-by-street descriptions of neighborhoods.  In true Hammer style, the Gazetteer occasionally has its tongue firmly jammed in its cheek with "wink-wink-nudge-nudge" references like Castle Hammerstein and the Gorgo Pass, but really this only adds to its charm.  Tonally, it is pitch perfect.  If you love the Hammer films and yearn to game in them, buy this.

Now, along with the Gazetteer I am reviewing the first scenario set in Wystdovja Vale, Kiss of Blood.  As much as I enjoyed the Gazetteer, I LOVED this. 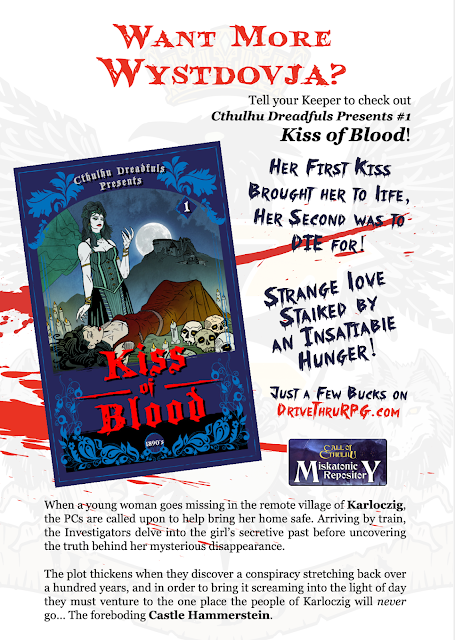 If you follow the blog you know I do not talk about scenarios for fear of spoiling them, but whether or not you use this in conjunction with the Gazetteer, Kiss of Blood deserves to be in your collection.  This is a beautifully illustrated 70-page PDF that tells a ripping good yarn, introduces new spells and a new (variation of a) monster, has a host of colorful characters, and--above all else--is The Vampire Lovers scenario that you didn't know you needed but you really, really do. If the team plans on doing more of this, I am the first in line for it. 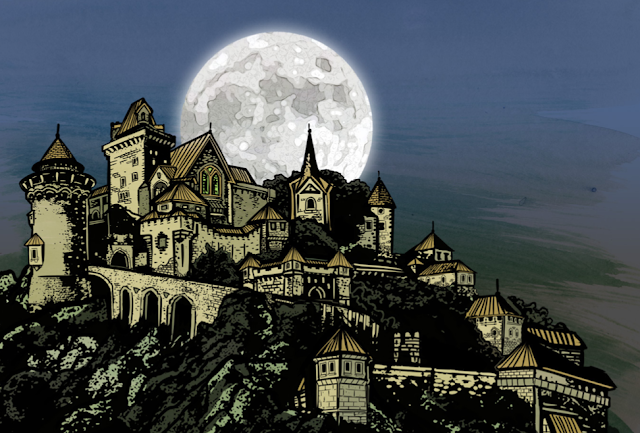 Don't let "fan made" put you off.  From the screen shots I shared you can see the layout is clean and professional, the art is great, and the writing top notch.  If like me you are physically incapable of turning off a Hammer film when it is on TV, if you want a solid Call of Cthulhu answer to Ravenloft, or you just want a terrific gothic romp, Kiss of Blood is for you.

Posted by Andrew Logan Montgomery at 11:10 PM No comments: