PSYCHONAUT: THE ART OF BLUEFLUKE

"...it is my position that art, language, consciousness and magic are all aspects of the same phenomenon. With art and magic seen as almost wholly interchangeable, the realm of the imagination becomes crucial to both practices." 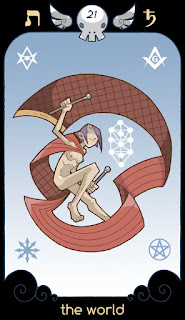 Magic seems to go hand in hand with artistic impulses.  It only makes sense; Magicians and Artists work at manipulating symbols, and the act of "creation" is integral to both.  Rattle off a list of modern Magicians and you find a pack of artists as well.  Crowley was a poet and prolific writer.  Spare was a renowned visual artist.  Anton LaVey was a gifted musician keenly interested in the idea of the image as essential to magic.  Andrew Chumbley's works combine striking visual imagery with magic and poetry.  Grant Morrison and Alan Moore are both comic book high priests and public Magicians.  Indeed. if you dig deeply enough for the Indo-European roots of the words we use, it is even likely that magic and imagine derive from the same source (possibly PIE magh- "to be able, to have power").  It goes back to the shamans who painted on cave walls to ensure a good hunt, to the idea of seizing an idea from the hidden realms and shaping it into something tangible. 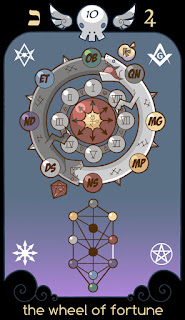 What we now call "chaos magic" originally was just referred to as "magical art" in seminal works like Liber Null and Psychonaut.  Generally viewed as the offspring of Peter J. Carroll and Ray Sherwin (the latter of whom liked to use the term "the theatre of magic"), chaos magic was born in the 1970s as an attempt to look across the broad field of magical traditions in an attempt to distill the techniques and practices common to all.  It was meant to be magic ripped free of tradition, a highly individualistic path that encouraged the development of one's own symbol sets.  If Carroll and Sherwin were the parents, Austin Spare was clearly the grandfather (though to my mind, LaVey does not get the credit he should for being a sort of uncle).  At the core of sorcery, chaos magic wanted to tell us, was the exploration and manipulation of consciousness. "Belief," in this quest, was "a tool."  I would liken this to LaVey's "suspension of disbelief."  The idea was that magic invested symbols--any symbols--with power, irregardless of where these symbols were drawn from.  The Magician could invoke Isis or Gabriel or Alice in Wonderland so long as in the course of the ritual these beings were animated by belief.

Obviously this flies in the faces of hardcore Traditionalists like Julius Evola, who tended to see their symbols as a sort of Truth handed down from time immemorial.  This iconoclasm gave chaos magic its sort of "punk" glamor.  Chaos magic was a post modern field where magic was liberated from dusty grimoires and kabbalistic laundry lists.  Now magic could turn up anywhere.  Even, as Morrison and Moore have demonstrated time and time again, in comic books.

This brings us to Arch-Traitor Bluefluke. 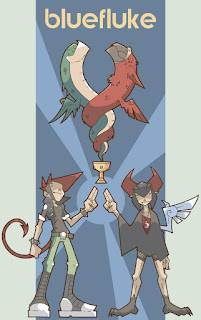 Since I first tripped across Bluefluke's work, it has become a destination I recommend to anyone trying to get a sense of what chaos magic is  ("Curious about chaos magic?  Go check out http://bluefluke.deviantart.com").  All the hallmarks are there.  The Magician comes at you with a striking visual style simultaneously mystical, anime, and punk and a "magical name" that sounds like a rave DJ.  Bluefluke writes and illustrates with the same cocktail of respect/disdain for tradition that fuels zen, a yin-yang fusion of opposites essential for reaching "qabbalstic zero" (or again, Crowley's n + -n = 0).  In a way, this Magician is performing the same trick that LaVey used in slapping Satan across his magic...many will look at Bluefluke's art and think "this can't be taken seriously" and wander off (LaVey was going for the more "frightened off").  The intellectually curious, however, will stick around and suddenly discover how deep the well goes.  This is an ancient trick, my friends, separating the initiates from the voyeurs.

And Bluefluke is worth sticking around.  The Psychonaut Field Manual, at this writing in it's 3.5 incarnation with four of five chapters finished, is a free grimoire containing a completely workable system.  The title is obviously a wink and a nod to Peter J. Carroll, and this combined with the focus on gnosis (qabbalistic zero again), the Discordian touches and the frequent appearance of Michael Moorcock's star of chaos all plant Bluefluke firmly in the chaos magic stream, but the tech in its digital pages is universal.  This isn't to say that Bluefluke's work isn't highly idiosyncratic and recognizably unique, nor that the particular synthesis of ideas here isn't new (it is), but rather that this very uniqueness is showing by example what chaos magicians should be striving for.  "Take these tools and explore thyself." 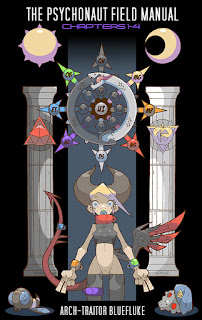 I'm still fond of Grant Morrison's "Pop! Magic" essay as an entry point for chaos magic, but The Psychonaut Field Manual is meatier on a thousand different levels.  Browse the illustrations alone and the Magician communicates this approach to magic; they seem at once hieroglyphic and Pokemon, stained glass and Cartoon Network.  This gives the images a punch that even, say, Chumbley's illustrations did not have.  They seem to say "magic is not all spooky and scary...it is spooky and scary and cotton candy Wizard of Oz.  That alone is heady stuff. 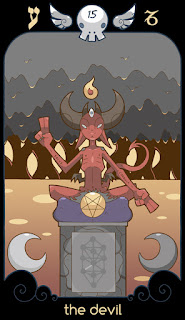 So what is actually in this system?  It starts with the familiar chaos magic idea of gnosis, a transcendent state wherein opposites are reconciled and thus nullified, including the subject/object dichotomy.  This mental "void" state is akin to the yogic samadhi and Buddhist nirvana, a deep meditative state in which the mind is silenced.  It is in this state that commands are implanted, causing subsequent change in the Magician and his Microcosm.  Part of this process involves overcoming the Ego, which Bluefluke terms the "Selfconscious."  This is the "I" that most people identify themselves with, the "I" that speaks, goes to work, and pays the bills.  The Selfconscious is really just a construct, however, a complex operating system running on our brains that is built by our experiences. Bluefluke tells us the Selfconscious is just one of a Trinity of "selves", and these three must be brought into alignment to enter gnosis.  Its partners are the "Subconscious," which is the body and its animal drives, and the "Superconscious" which is the artist, the visionary, and idealist.  Exercises are offered to bring these into "Soul Resonance," alongside visualization and meditative techniques.  This is the core of the system, which always runs along the lines of "Invoke Soul Resonance, enter gnosis," and then perform whatever specific act of magic follows.

The rest of Psychonaut deals with techniques like sigilization, invoking and evoking, god forms, and astral projection...among a great deal else.  There is a lot crammed into this deceptively simple little work.  Along the way Bluefluke offers a new way of looking at traditional consciousness mapping like chakras or the Qabbalistic sephiroth, looking at these as evolutionary stages of brain development in a new eightfold system partially inspired by Timothy Leary and Robert Anton Wilson.

This is a beginner friendly system, but also a refresher course for those who are old hands at all of this.  Like most chaos magic is it stripped entirely of "religious" elements, pared down to simple techniques and workable exercises.  It's a manual you are going to want to actually use to understand.

As with Bluefluke's artwork, the writing style is refreshing.  It is playful while taking itself serious, irreverent while speaking reverently, and relentlessly modern while teaching tricks used since before the mammoths went extinct.    The Psychonaut Field Manual will entertain you, challenge you, and delight you.  What more could one want in a grimoire.

And while you are there, do check out Bluefluke's Tarot Trumps.  I might prefer the Thelemic re-alignment of the Thoth deck better, but there are some fresh, powerful images there.