THE FALL OF THE HARABORN (AGAIN): Coming Back to Six Seasons in Sartar after Two Years, Two Books, and Too Long

This blog is, on the whole, a collection of essays. This one is a little bit different because it HAS to be different.

It is the first of an ongoing series as my gaming group--the one that played the Heroquest version of Six Seasons in Sartar-- returns to reprise their roles as the very same characters, this time adapted to Runequest Roleplaying in Glorantha. Together we will play the published version of Six Seasons, and then move into The Company of the Dragon. Along the way I will be providing additional thoughts, mechanics, and a LOT of stuff that got cut from both Seasons and Company. Some of this will appear in a little book I plan on publishing early next year, a collection of everything cut from the published campaigns packaged with a new scenario about what happens AFTER the Haraborn return to Black Stag Vale. Look for The Seven-Tailed Wolf in the spring.

Right now, we are in the process of remaking the characters for RQ. The next post will go into detail on all of that. This first one is a bit more personal than I usually get, but as I said, it has to be. Six Seasons has been a profound experience for me, and as one of those people who cannot process a thing until they have written about it...well, here you are.

Expect the posts ahead to be a bit more "all business."

Past is Prologue, and all that

IN THE SPRING OF 2018--and damn, doesn't that feel like a lifetime ago now--I introduced a new group of players to Glorantha.

They were not new to me, just the setting. Ira, Keith, Vicks, and David had already been through two campaigns with me (Numenera and Night's Black Agents: The Dracula Dossier). Keith and Ira had been around longer than that, survivors of an older gaming group that had imploded under all the usual pressures (new spouses, new jobs, new infants).

Gaming groups are like bands. It takes time to figure out each other's grooves and to fall into a rhythm, and when you add new players the whole tone changes. Even with the right people, it sometimes takes time to find the right game. Numenera was not it, and we had entered NBA expecting to play no more than a dozen sessions. When it became clear that the band was staying together, we needed something worth staying together for. Naturally I decided to introduce them to my first love, my home-away-from-home, Glorantha.

I've already talked about my long history with Glorantha in this blog and in both Six Seasons in Sartar and The Company of the Dragon. It goes back nearly forty years, and is a relationship that has had a profound affect on my academic, intellectual, and spiritual life. I think my own enthusiasm for the setting is infectious, but I also think Glorantha is a setting that sells itself. I must have introduced a dozen gaming groups to it, and never once did they fail to fall in love too. I felt in my bones this group would as well.

We chose Heroquest as the rules system. Runequest Roleplaying in Glorantha was still very new, and out of the three (I offered to run 13G as well) HQ was the one they voted for. With the system selected, I pulled out a campaign I had run in RQ2, Hero Wars, and Heroquest 1st edition, a little thing I was calling "Six Seasons in Sartar." I ran it again for them and decided--as an afterthought--to blog about it.

Just a week before the first session, the world lost Greg Stafford. I think my players all sensed what a profound blow this was to me. Keith and Ira located a bottle of mead--not terribly easy in Japan--and we all toasted Greg before beginning the campaign. I am now firmly of the opinion all campaigns should begin with such a toast.

And the old shaman was there looking over us, I think. The players took to these characters, to the Haraborn NPCs, and to Glorantha faster than I had seen before. The village and clan instantly became real. The level of investment was intense, and I knew we had found our campaign.

What I never could have predicted was what was happening in the world around us.

Every time I posted a session, the blog numbers shot up. Sure, reviews generally attracted more readers (the reviews of occult books far larger than games, actually), but people were writing to me more. They were reading about the Haraborn, about the campaign, and writing to tell me how invested they were in it. I still remember the first email suggesting I publish it. I think I laughed. Then came the second. The third. And so on. Something was in the air.

Unfortunately...something else was in the air too. We heard about it earlier than the rest of the world here in Japan when a cruise ship in January of 2020 was quarantined just off the coast. There was a virus. People seemed afraid. We suspended the game sessions and then, well. You know.

The Zombie Apocalypse was not Milla Jovovich kicking ass, it was Tokyo grinding to a total halt, silence hanging ghostly over the streets. It was people masked and avoiding each other, hands gloved and frequently sanitized. It was businesses closing, including university campuses like the one I taught at. Suddenly I found myself sitting on my butt in my apartment, watching the world go by outside the windows. And I decided to put Six Seasons in Sartar on paper.

As I write these words, Six Seasons is the bestselling title in the Jonstown Compendium. It is currently just 85 copies away from going Platinum, something I am really hoping for, not out of personal vanity but because it really ticks me off that there is still a large segment of the gaming world that turns its noses up at any community content title. Well, both A Rough Guide to Glamour and Citizens of the Lunar Empire are ENNIE nominees, and Six Seasons is on the verge of reaching a level of sales few titles reach, community content OR no (the sequel, The Company of the Dragon, is itself just 45 sales from Gold). If people wish to continue missing out because all these titles do not reach their purity standards...their loss. Rant over. 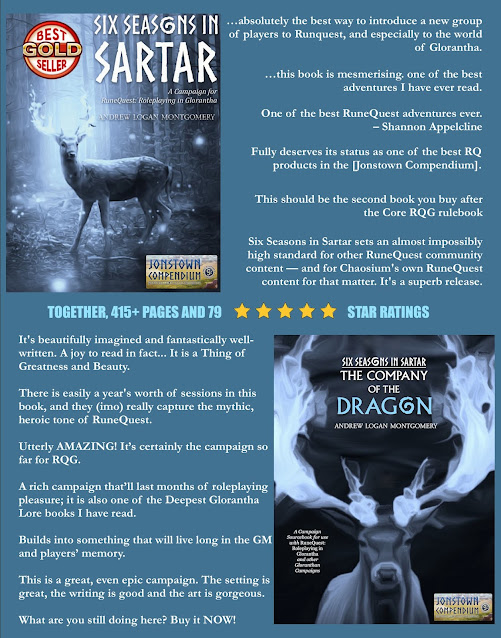 But back then, I never imagined or expected any of that. I hoped to sell a few copies, to make my time on furlough meaningful. I had no idea what was about to happen. None of us did, really. The Jonstown Compendium was still brand new. We were fumbling around blindly, and suffering severe disadvantages. People kept confusing us for Chaosium. They wanted vouchers with their PDF copies for print books even when we had no idea if our books would ever see print. And people like me...well, I am a writer, people. I have written novels, plays, short fiction. Suddenly I found myself doing lay out, organizing art, making art. Then I was expected to learn things about ink and bleeds and whatnot for the printed versions. I was completely lost at sea.

With Nick Brooke's guidance, support, and the occasional slapping of sense into me, and unwavering support from Chaosium (especially the Notorious MOB), Six Seasons made it to print. The sequel, Company of the Dragon, benefits so much from the errors I made in the first book and I think it shows. But we were all learning together, and I do not think I go out on a limb when I say that that the entire Jonstown Compendium deserves your attention.

The pandemic dragged on (like this post is starting to...fear not, I am wrapping it up!). I went back to work on a reduced schedule, teaching classes via Zoom. Japan was dragging its feet on vaccinations. So for 18 months I kept my nose clean. I stopped going out. I masked. I sanitized. And it was writing the massive Six Seasons in Sartar sequel, The Company of the Dragon, that kept me from going mad.

Now. Finally. As 2021 wanes. Nearly three years after we lost Greg and the journey began, my players and I are all fully vaccinated and making plans to bring Six Seasons to life again, and then enter The Company of the Dragon again.

This time, though, it is all different. it is no longer my campaign, our campaign. It belongs to hundreds of groups out there. Nick Brooke will be running it, and I hope to interview him and post it here. And the call goes out to any of you who wish to share. I would love to hear your versions going forward to.

This time, we are playing the saga together. And that is simply...awesome.

Posted by Andrew Logan Montgomery at 6:27 AM