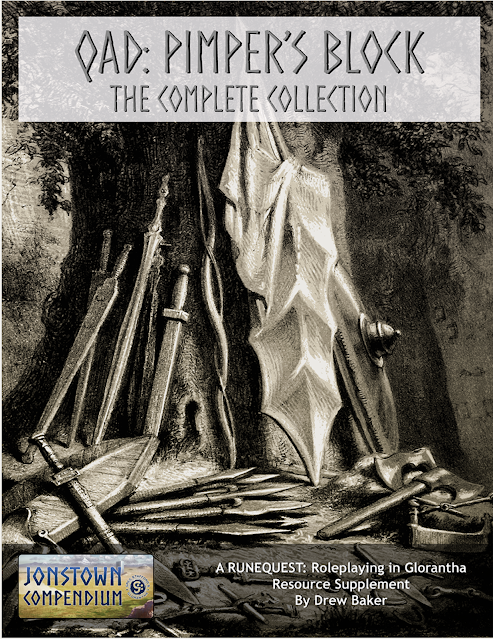 I MAINTAIN THAT STEVE HERBERT PERRIN (1946-2021) gave the hobby not only its first true "universal" game system, but also one of its simplest. The Basic Roleplaying System, as it came to be called, was based on a single, intuitive mechanic that could easily be tweaked to model any conceivable situation. This core mechanic could be explained and grasped in literally just seconds. Having said this, BRP does come with a fair amount of detail. First, it is a skill-based game, and characters can possess a lot of these. Second, different applications of BRP have varying extra layers of detail to better model their respective settings. Call of Cthulhu has "Sanity" mechanics that model the way Lovecraft's protagonists suffer mental collapse in the face of the Old Ones. Superworld had comprehensive lists of powers, with optional features and limitations, energy costs, etc. Runequest, the game that started it all, had an elaborate magic system and combat rules which took into account hit locations, the armor worn on each location, and the hit points in each location. So while BRP is in essence easy to learn and play, there can be a bit of bookkeeping. This is seldom an issue for players, who have one character to worry about. For GMs, it can mean lengthy prep time to detail all the NPCs in the scenario.

Some are comfortable "winging it." This has always been my favored approach, and in both Six Seasons in Sartar and The Company of the Dragon I included systems to help other GMs whip up NPCs as needed nearly on the fly. Other GMs, and especially ones new to Runequest and or to gamemastering, might prefer fully fleshed out NPCs.

Well ladies and gentlemen (and any of the four other Orlanthi genders), have I got the product for you.

QAD: Pimper's Block The Complete Collection is the kind of product we have not seen in decades. The only thing I can think to compare it to was William Keyes' Rune Masters back in 1980. It is, well, a collection of ready-made characters. But while my last sentence was substantively true, calling Pimper's Block a "collection of characters" is like calling Mt. Everest a "hill" or the Sahara a "few grains of sand." This is a collection of characters the likes of which no one as ever seen before. Let me just quote you the contents; Table of Contents from the Sartar PDF
What you are getting here, then, are 520 fully detailed characters from ten different cultures and 2600 more lightly described NPCs. The fully detailed characters are not quite like the pre-gens in the Runequest Roleplaying in Glorantha corebook. They are left intentionally vague in some areas to be fleshed out, recycled, and reused. Each comes with magic, skills, weapons, and armor, and none feel cookie cutter however. Each feels fleshed out and fully formed. Simply put, you might never need to create your own NPC stats ever again. 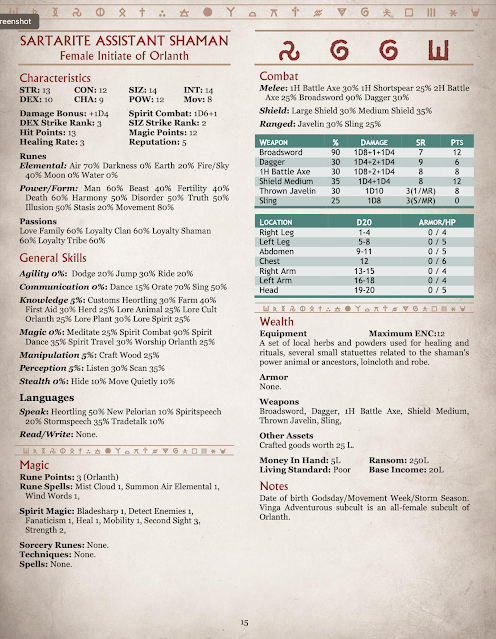 A fully-detail character example
The 2000-page collection is divided over ten PDFs, each around 200 pages each, Some of the material (the first ten pages or so) is repeated in each booklet, and covers how the collection is set up, how to make the best use of it, and a fair amount on slavery in Glorantha and the business of Pimper's Block. The rest is all glorious NPCs. While the collection is not illustrated, it is handsomely presented and edited. 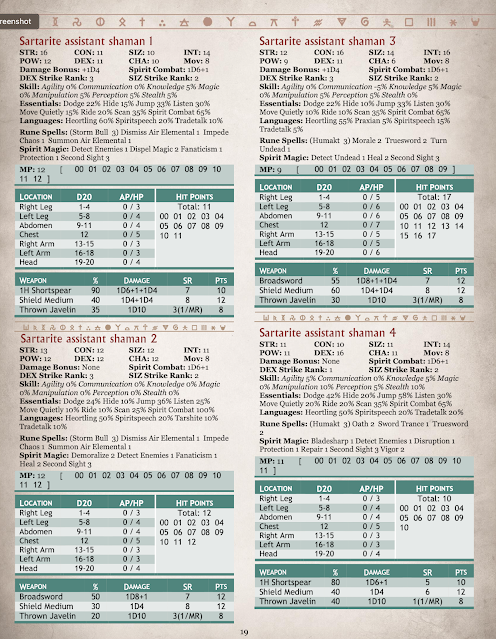 "Squad" characters
Look, if you run Runequest this product is worth ten times its price. I cannot imagine any GM regretting the purchase. Most of the detailed characters could easily be tailored into the major NPC of your choice, and the squad characters are ideal for the supporting cast. There is simply so much here. The PDFs are even terrific for showing new players what a character might look like. Many new players might want to use them as templates.
Really, this is the sort of thing the Jonstown Compendium was made for. Pimper's Block The Complete Collection is the kind of utility that a publisher like Chaosium would not want to tackle, but which in retrospect everyone is going to want. I certainly will never been hard-pressed for NPCs again.
Get it here.