THE BOOK OF DOOM: A JONSTOWN COMPENDIUM REVIEW

We need to talk about Simon Phipp.
While fanzines and later fan websites are a thing for most RPG settings, they have long been a very strong tradition for Glorantha. In part this is due to the fact that it is a lore-heavy setting. There is a lot out there to analyze, detail, and discuss. On the other hand, there is also the long-standing "Your Glorantha Will Vary" policy, meaning that how the setting appears at your table will differ from at other tables. This all but demands fans get out there and share what "their" Glorantha looks like. But the real culprit is probably RQ3, the third edition of the flagship Glorantha RPG RuneQuest published in the 80s and early 90s by Avalon Hill.
For those of you who may not have lived through all of this, the story is detailed in Shannon Appelcline's terrific Designers & Dragons. In a nutshell, the relationship between Avalon Hill (RQ's publisher) and Chaosium (RQ's creator) was never a terrific one. The game, which had literally been created to showcase Glorantha, was turned into a generic system that could also be played in Glorantha. This was a turn-off to many fans (myself included). There were long stretches of time between the release of any Gloranthan materials, while generic products for vikings and ninjas appeared. As the new default setting of RQ was "Fantasy Earth," when Gloranthan products did appear they often presented the cultures of Glorantha as Earth-analogues, a problem that persists in Gloranthan gaming circles to this day. While all this would eventually lead Chaosium to pull the plug on the relationship, it also led to fans who decided to take matters into their own hands and create their own Gloranthan content. Here was the birth of the Gloranthan fanzine tradition.
For more details on all of this, just do yourself a favor and go read Shannon's books. I need to get back to Simon.
Now, as any long-time Gloranthropologist will tell you, Simon is the author, curator, and custodian of Simon's Glorantha Pages. Never mind the quality. Feel the width. This online collection of Gloranthan lore has existed since time immemorial (I could be exaggerating), or at least to around the same time I arrived in Japan (just under 20 years but I assure you it feels like forever). All these years of producing fan material for Glorantha makes him, gentle reader, exactly the sort of creature the Jonstown Compendium is the ideal habitat for. He has mountains of material and he is going to use it.
It's been a bit over a year since the Jonstown Compendium--a place for Glorantha fans to publish materials--appeared, and in that time Simon has unleashed several projects including Secrets of Dorastor and Secrets of HeroQuesting. For people watching Simon's website, it felt like these projects had been brewing for awhile in his mind looking for a place to manifest. The same can be said for The Book of Doom, which simply put is the kind of resource you would have to be mad not to purchase. It's a compilation, or dare I even say a compendium, of spells and skills that Simon has obviously been working on for decades. To be exact, we are talking about 55 new RuneQuest skills, 89 new spirit magic spells, 22 sorcery spells, and 494 new Rune spells. Not enough for you?  Fine. Simon also delivers up new rule systems including Alchemy, with 15 alchemical "concoctions" and 11 ways of delivering them. If you still need more numbers tossed at you there are 4 new magic items and 7 new varieties of plant. You are never going to use everything in The Book of Doom, but you are definitely going to use some of it. 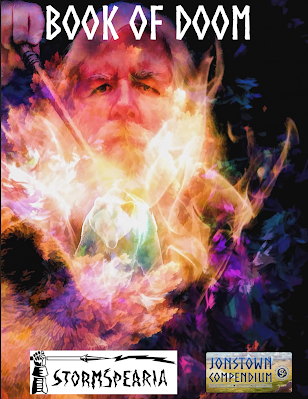 It is by default a RuneQuest resource, however. While most of it could be used in sister games like HeroQuest/QuestWorlds or 13G, it presents its materials through the lens of RQ.
There is not a lot of art in The Book of Doom, and it reads a bit like an encyclopedia, but that is essentially what it is. We are looking at years of ideas a Glorantha fan has come up with. Rather than going for a skills section, a spirit magic section, and a Rune spells section, the items are grouped together in fields or topics. For example, in the "Crafting" section Simon offers up some rules on crafting items, followed by specific crafting skills. Then comes a large selection of spells that relate to the creation and shaping of items. The same applies to realms like "Adventuring," "Agriculture," "Entertaining," "Love," "Twins," etc. It's a common sense, practical approach that arranges a lot of material in a way that is convenient to use. 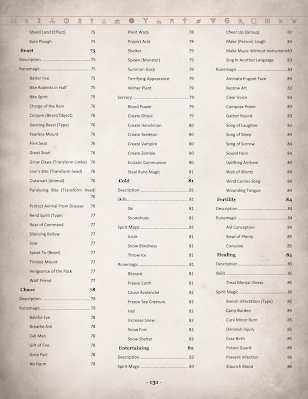 To be certain, there is a ton of crunch in here, but it is not all crunchy. There are some very specific combat items like "Tooth Shattering Armor," a spell that like the name says basically protects against bite attacks, but also a lot of story-oriented, roleplay-heavy ones. "Plough Hard Earth" may not get a lot of adventuring use, but to a society like the Orlanthi it is far more valuable than "Bladesharp." There is plenty in The Book of Doom for those looking for magic and skills useful off of the battlefield.
Between this and Chaosium's The Red Book of Magic it is hard to imagine needing to come up with any more spells for your game. While the Red Book is a compilation of published spells, The Book of Doom expands on those with the author's own innovations and ideas. Filled with boxed texts and asides that explain the designer's thinking, The Book of Doom would be an extraordinarily useful tool for any RuneQuest campaign. To be clear, The Book of Doom is really just one author's take on the setting, and there will likely be areas where you disagree with Simon's choices. But this is essentially the way it has always been with the Glorantha fanzine tradition. Your Glorantha Will Vary, and The Book of Doom has a ton of ideas you will want to borrow to personalize your view of the setting.
Posted by Andrew Logan Montgomery at 5:56 PM