This is the second in an ongoing series of articles about a campaign in Chaosium's 1994 Nephilim. In Nephilim, the player character is an inhuman elemental spirit that incarnates in a series of human hosts over the course of history.

IN ENGLISH, THE SECOND TAROT TRUMP is usually labeled as number I, and called either the Magus or Magician. It is worth noting however it is often referred to as the "Juggler." That last appellation formed the inspiration for much of this session. 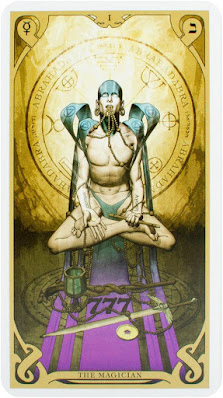 A frequent criticism of 1994's Nephilim is that it is essentially a game about "possession." I've already shared my thoughts on this elsewhere, but I think these criticisms have more to do with the blinders that secular humanism, Western culture's celebration of (obsession with?) "individuality," and two thousand years of the Gerasene demoniac story getting repeated have put on many potential players. After all, in RPGs you can play a professional killer, a tomb raider, or a blood-drinking monster, but if you play a spirit that incarnates in a human host people suddenly start developing qualms. As modern Westerners we have been taught that "uniqueness" and "autonomy" are the two greatest traits a person can possess, even though very few people actually possess them. Hermeticism directly challenges this assumption, and there is no way Nephilim could be authentic without doing so as well.

That aside, this session was a chance to dig into incarnation, and so we decided to frame it from the point of view of the simulacrum. What does incarnation feel like?

THE DARK NIGHT OF THE SOUL

Dr. Trevor Bennett, 42, is a Las Vegas-based forensic pathologist. He lives with his wife, Lucinda, and his daughter Marisol. On the surface his life appears suburban, successful, and happy. In reality, it is all caving in.

When I run Nephilim I always start from the perspective of the simulacrum, and I always ask the player to build a "dark night of the soul" into the backstory. The term comes to us from Catholic mystic St. John of the Cross (la noche oscura del alma), and signifies the spiritual crisis and crumbling of identity as one approaches union with God. It is hardly, however, limited to Catholicism. Buddha's confrontation with Mara on the eve of his enlightenment is another famous example. In many mystical traditions, the individual breaks down and endures a period of blackness before reintegrating and achieving union with a higher spiritual force. In Hermeticism, this is the alchemical process of nigredo.

In Nephilim, the elemental spirit lacks a soul (Sol, Solar Ka). It is made of five other elements corresponding to heavenly bodies (Mercury, Venus, Mars, Jupiter, and Luna) but has no center, no core. Humans possess only Solar Ka. Incarnation then is the reformation of a complete microcosm, with the Nephilim's elements coming into orbit around the human's Sol. It makes both the elemental spirit, and the human host, a complete being. But as the core element, Solar Ka can dominate the elemental forces, so prior to incarnation, the Nephilim blindly and instinctively seeks out hosts in a period of crisis, a moment of weakness when the Sol is wavering.

For Trevor Bennett, this means being on the edge of losing everything. Years ago he was set up into spending the night with a prostitute by a local drug cartel, las Polillas Calaveras, the “Skull Moths” (Death’s Head Moths in English). They have been extorting him ever since into falsifying death reports, switching bodies, and lying about causes of death. Now, his ambitious younger rival, Dr. Emily Yang, has discovered his involvement with the Moths and has threatened to expose him if he doesn't step down.
Bennett is drinking too much and sleeping too poorly, his world about to end, when the incarnation occurs.
The session starts with a dream of listening to his mother playing piano downstairs, the metronome ticking. He awakes suddenly and hallucinates a gigantic serpent, like a constrictor, slithering across the carpet towards his bed (the player chose a Snake Metamorphosis). It is just a trick of the light. And yet he feels strongly a presence in the room.
THE JUGGLER
The next morning he awakes and climbs out of bed to go downstairs... only to suddenly find himself in a woman's body. The character's first incarnation was an Egyptian priestess (Nofretiti) in Thebes, 1350 BC, and Bennett is suddenly experiencing her memories. Befuddled, he struggles to understand where he is, who he is, and what is happening to him. The scene shifts again and he is now a man again on the streets of Elizabethan London (the second incarnation). Both hallucinations pass and he finds himself befuddled in his kitchen, his wife staring at him wondering why he hasn't gotten dressed for work yet while his daughter plays a game on her phone.
Bennett goes into the office and we introduce Emily Yang, and roleplay out the tension of the situation. Soon after, Bennett begins to hallucinate both Nofretiti and Avad Levinson (the Theban and Elizabethan incarnations), seeing them as people in the room only he can see or hear. They try to explain what has happened to him.
The elemental spirit never "speaks" in the session. Again, this is consistent with the idea that lacking a Sol, the Nephilim is not a person. The two previous incarnations, however, are fully realized identities that Trever Bennett now carries around inside him. Over the course of the campaign they will appear less and less to him as external beings as he integrates more with their memories, but early on they play the role of narrators easing him into his new reality. Bennett is "juggling" these identities around.
Bennett goes to the gang member who pulls his strings, Axel Escribano. He tries telling the gangster that he is not going to be able to go on as their man inside the crime lab much longer. Escribano, who is young, well-dressed, but with shockingly pink dyed hair, explains how unfortunate that would be for Bennett's wife and daughter and suggests taking Emily Yang "out."
Persuaded by the new voices in his head, Bennett attempts (and fails) a spell to seduce Emily Yang and bring her around to his side. This only makes matters worse and intensifies the trouble Bennett is in. That night, however, Yang is killed in a very convenient car accident, too convenient by far...
THE MAGICIAN
The previous incarnations urge Bennett to both find and locate his stasis object, as well as seek-out and make contact with his Arcanum, the Magician. Signs, omens, and Ka vision point him in the direction of the latter.
In our Nephilim Vegas, the Penn & Teller/Siegfried & Roy analogue is Black & White. Merlin Black and Arthur White run a nightly performance in the Luxor hotel and casino, and Bennett uses a lot of cash and resources to get a VIP backstage pass to their performance. Merlin Black is in fact Ras-khem-ka, a Nephilim Bennett knew previously in London as Dr. John Dee. Arthur White is the Magister Templi of the Stella Auream, a Rosicrucian society working unwittingly for Black. They will help Bennett seek out his stasis, but there is another complication coming...
THE VIRGEN NEGRA
The gang extorting Bennett all these years is a particularly vicious one, engaged in both human and drug trafficking between northern Mexico and the souther United States. Rumors are that they are run by a woman, called only la Virgen Negra (the Black Madonna). Merlin Black is extremely distressed to hear Bennett has dealings with this gang. He suspects the Black Madonna is not a woman, not human, and not even alive, but an ancient Aztec Selenim operating in the region for centuries. Bennett finds this a shocking coincidence that his life has been entangled with the world of the Nephilim all these years without knowing it. Merlin Black tells him there are no coincidences, and that it time he will understand that his life, and the existence of Temek'Tel (the Moon Nephilim incarnated in him) have been entangled all along.
Returning home that night, Bennett has a visitation from Emily Yang. Dead, nude, and showing her autopsy scars, she hovers inches about the ground staring at him. In Ka vision he sees her shrouded in dark tendrils of Black Moon Ka.
I see you, she says, but it is the Black Madonna doing the talking.
Posted by Andrew Logan Montgomery at 6:43 PM