NOTE: This is just the first in a series of essays examining Nephilim: Occult Roleplaying.  This time we look at the core concepts and some of the controversy around them.  Next time, we will look at the game universe in greater detail. 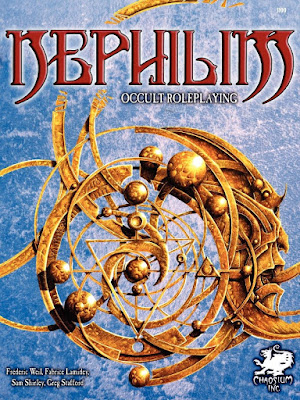 GIVING THE GAME ITS DUE

TO DATE the most popular articles on this blog have been the occult ones. This probably comes as a surprise to those who have joined me more recently as the focus has shifted largely to gaming.  My series on Andrew Chumbley's Azoetia, the basic principles of Hermetic thought, and even traditional witchcraft come out slightly ahead of even the most-read game reviews (to date, the stunning new edition of Masks of Nyarlathotep).  Conceptually, I don't disassociate magic, writing, or gaming however, so the recent refocusing hasn't been that much of a sea change in my mind.

I mention this though because if you do the math, the bulk of the traffic here has been either for occultism or Chaosium games.  So it is somewhat astounding looking back that I never actually got around to dealing with the work that unites those two streams.  It becomes particularly shocking if I admit truthfully that in the (un)holy trinity of my favorite games, Chaosium's Nephilim: Occult Roleplaying might actually be slightly nearer and dearer to my heart than either RuneQuest or Call of Cthulhu.

A BIT OF BACKGROUND

It's probably inaccurate to lump Nephilim in with the host of "urban fantasy" RPGs that flooded the market in the wake of Vampire: The Masquerade. Many critics do, but the fact remains the original French edition of Nephilim was published in 1992, not even a year after the 1991 publication of Vampire, and Vampire was not quite yet the phenomenon it would become. Given its quasi-Biblical subject matter and country of origin, it is far more likely that Nephilim owed more to 1989's In Nomine Satanis/Magna Veritas than any World of Darkness title.

Chaosium's edition appeared in 1994, and was part of a new trend of translating European games into English (both Kult and The Mutant Chronicles had appeared in English the year before). Multisim, the publisher of the original, had licensed Chaosium's Basic Roleplaying System so it was natural for Chaosium to be the ones to bring the game to the States. However, this was a year after Mage: The Ascension had hit the shelves, and it was an easy assumption to make that Chaosium was just trying to ride its coattails. Nothing could be farther from the truth, however. Yes, you can look at the two games as magician protagonists waging secret wars behind the facade of everyday reality, but the two games are as different as day and night (or rather, Postmodernism and Tradition). Mage, with its "reality is whatever you make it" approach was the ultimate vehicle for a pluralistic, self-referential, epistemologically relative age. It had far more in common with Dr. Strange or The Invisibles than anything even vaguely resembling real life occultism. Nephilim, however, was immersed in the "Tradition."  The game was a love letter to perennial philosophy.

Despite being a monster hit in France, Nephilim never quite managed the same sort of popularity dans le monde anglophone. There are complicated reasons for this. Shannon Appelcline, in his terrific Designers & Dragons (and this is the point where yet again I urge anyone seriously interested in the hobby to get and read that series of books) puts much of the blame of the fact that the English edition was rushed to print too early and poorly supported in its first year. This is probably true--Shannon was there in the midst of it and knows better than I--but being the guy who bought the rules the moment they hit my local game store, and started running it soon after, my experience was that Nephilim ultimately was the victim of its own authenticity. 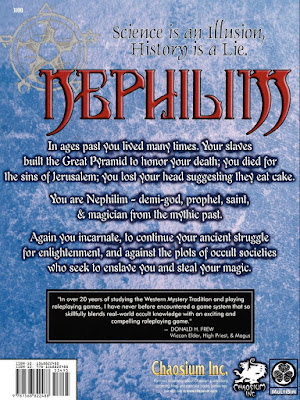 Mage was an easy sell to a modern Western public.  "You wake up one day and realize that the world is what we make it and humans have the potential to be gods."  This is, ladies and gentlemen, pretty much the entire message of the 20th century.  Don't get me wrong, I like Mage, but it does seem designed to stroke our Postmodern human egos.

Nephilim was a far harder sell.  "You are an element spirit that fell from grace, and in order to re-ascend to perfection needs to merge with a human host, uniting the lower and higher worlds."  The player characters in Nephilim are technically not the humans but the spirits.  I say "technically"--and I firmly believe this was a crucial misunderstanding of the game--but the fact remains in the world of Nephilim humanity isn't the center of the universe.  In its struggle to attain Agartha (the transcendent perfected state) your Nephilim character has reincarnated in as many as a half dozen human hosts down through history.  The spirit needs the human, who possesses the vital solar essence that the spirit lacks, but humans are pretty much the junior partner. This doesn't quite masturbate the ego of the human player in the same way Mage does!

On the other hand, the core principle of the game is accurate to the Western Mystery Tradition, which has always held that humanity cannot save itself.  Bound to the animal world of matter, only those who form a partnership with a higher spiritual power can become inhuman and ascend to higher reality;

...The mutation of one’s deepest structure is the only thing that matters for the purposes of higher knowledge. This knowledge, which is at the same time wisdom and power, is essentially nonhuman; it can be achieved by following a way that presupposes the active and effective overcoming of the human condition...

To this end the Tradition has long embraced the principle of uniting with an alien, spiritual being;

(there) is an auxiliary divine, or semi-divine (daimônic) spirit...called a παραδρoç in Greek. Such auxiliary spirits were permanently attached to the magician after certain rites were performed, not just for the duration of the operation, but for life. In such an instance, the magician is thought to gain a certain kind of union with that entity—to become a “son” of that god or daimôn. The essence of the magician and that of the entity have become, or are becoming, one. This is why the magician can himself be worshiped as god or daimôn...

By the Renaissance, in Christianized Europe the idea of "semi-divine" spirits had become associated with the Biblical Nephilim, or "fallen ones."  Discussed in far greater detail in the apocryphal Book of Enoch, they nevertheless get several mentions in the Bible from Genesis forward.  Essential, they are half-human half-angelic entities, the Jewish equivalent of demigods like Heracles or Jason.  Hermeticism--a form of the Tradition born in Hellenic Alexandria in the first centuries after Christ--attributed to these Nephilim all of the arts and sciences, including magic (again, this is in the Book of Enoch as well).

The Nephelim (sic), the "fallen" angels, are nothing less than the titans and "the watchers," the race that the Book of Baruch (3:26) calls, "glorious and warlike," the same race that awoke in men the spirit of the heroes and warriors, who invented the arts, and who transmitted the mystery of magic. What more decisive proof concerning the spirit of the hermetico-alchemical tradition can there be than the explicit and continuous reference in the texts precisely to that tradition? We read in the hermetic literature "The ancient and sacred books," says Hermes, "teach that certain angels burned with desire for women. They descended to earth and taught all the works of Nature. They were the ones who created the [hermetic] works and from them proceeds the primordial tradition of this Art...

These Hermetic precepts form the core of the Nephilim RPG. A race of spirit beings, fallen from on high, teach humanity all arts and sciences, guide human civilization, and merge with certain mortals to form half-human half-spiritual beings.  To achieve perfection, the spirit and its host slowly merge together through as process called Metamorphosis.  The human and spirit overcome their conditions and become something inhuman, something higher.  An Agarthan.  All of this is perfectly correct from the standpoint of the Western Mystery Tradition.

In the eyes of many potential players, however, humans became mere "flesh vehicles" for the body-hopping Nephilim.  That this spectacularly misses the point is lost on a generation of Postmodern thinkers for whom "esoteric" means "out there" (it literally means "in there") and mystical is some nebulous concept.  The goal of the Nephilim is the "chemical wedding," to become one with its human host, and from the timeless and transcendent perspective of Agartha, they thus always were one.  This is the message of the very last page of the book, which closes with a quote from the Sufi mystic and poet Jalal al-din Rumi;

The moment I heard my first love story, I starting looking for you, not knowing how blind that was.

Lovers don't finally meet somewhere.  They're in each other all along.

Nephilim was not, as some critics felt, "body rape" but rather a love story.  But from a modernist perspective, games where humans become blood-sucking corpses, werewolves, ghosts, mages, and mummies are all well and good...so long as it remains all about the human condition.  Suggest there might be something higher or beyond the human condition, and sales suffer.