THE DARE: A CALL OF CTHULHU SCENARIO AND SOURCEBOOK REVIEW 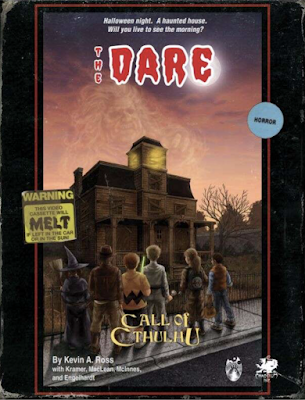 WE PROBABLY HAVE TWO "STEVENS" to thank (or, depending on your tastes, to blame) for the quaint and curious genre that--if it had a name--would probably have to be called "Eighties Pre-Teen Adventure Horror."

The first would be the "ph" Stephen, the right honorable Mr. King, whose 1982 novella "The Body" was adapted into the immensely popular film Stand By Me.  While "The Body" didn't contain any supernatural elements, it set a mold for coming of age tales which pit pubescents against the macabre, including the obligatory bully.  Building on the elements in "The Body," the prolific King unleashed his 22nd novel, It, the same year Stand By Me hit the screens.  This was a supernatural tale, and an extremely Lovecraftian one as well.  In it, we see a group of middle school outsiders struggling against an ancient, extraterrestrial horror.  While neither "The Body" nor It were actually about 80s kids--both have the kids in the late 1950s--their appearance in the 1980s link them indelibly to the decade, so much so that when It was remade in 2017 and 2019, this time it was updated to have the young protagonists in Reagan Era America.

The other Steven is the one with the "v."  Richard Donner's The Goonies was something of a cultural phenomenon, an immensely popular 1985 film that earned six times its budget in box office returns and has since been marked by the Library of Congress as being "culturally, historically, or aesthetically significant."  But The Goonies came from a story by filmmaker Steven Spielberg, whose film company Amblin also produced the film.  The Goonies is about--no surprises here--a group of nerdy middle school outcasts who this time end up in a wild adventure to win a pirate treasure.  While again it is not strictly supernatural, there are enough pulp fiction elements in it to see how it feeds into the genre.  Spielberg, like King, was extraordinarily adept at using kids as protagonists, the epitome of which was probably his 1982 film E.T. (speaking of cultural phenomenons).  The immense success of The Goonies threw open Pandora's Box, and out would spring films like Monster Squad, The Gate, and The Lost Boys (all, curiously, in the very busy year of 1987).  A genre had emerged which fused the elements of King's fiction with the young adolescent horror/mystery comedy of The Goonies.  The genre experienced a resurrection of sorts in the second decade of the 21st century, with JJ Abrams 2011 Super 8 (produced again by Spielberg), three seasons of the Netflix smash Stranger Things (2016-present), and the aforementioned big screen adaptation of King's IT.  All of these were tales of school age outsiders in the 80s caught up in the weird and the unnatural.

Like the two new It films, The Dare (Sentinel Hill Press, PDF, 70 pages, $14.99 US) is itself a remake.  Originally released back in 1990 as a Call of Cthulhu tournament module, this Kevin A. Ross classic has returned re-imagined and greatly expanded for the 7th edition rules.  With Bret Kramer riding shotgun, Badger MacInnis on layout, art by Ian MacLean and Katie von Csesfalvay, and Dean Engelhardt, Richard LeDuc, and Clint Cronk providing handouts and character sheets, The Dare is more than the sum of its parts.  It's a Cthulhu scenario, yes, and a terrifying one at that, but it also is a terrific introduction to the venerable old RPG, a new interpretation of the rules, a love letter to the films mentioned above, and a sound foundation for a unique Call of Cthulhu campaign.

Let's take those in order.

I am not, obviously, going to tell you too much about the scenario.  River Song would scold me.  I will tell you that your "Investigators" will all be a group of preteen kids back in the 1980s, dared to spend the night in the town's obligatory haunted house by a slightly older bully.  What comes next is itself a bit of an homage, a salute to Lovecraft (especially "The Dreams in the Witch House"), King (It and especially his 1984 short story "Gramma"), and the iconic Call of Cthulhu scenario "The Haunting."  Ross pulls no punches here, and The Dare wisely comes with two modes of play, PG and R.  The PG mode is a bit lighter and suitable for younger players, while R serves up very adult levels of terror.

Which brings me to the next point; The Dare is a perfect introduction to Call of Cthulhu, particularly for younger players.  The reason for this is that the book contains a new, streamlined version of the 7th Edition rules called--brace for the eye roll--"The Call of Kid-thulhu."  Geared specifically for portraying kids rather than crusty-old academics or hard boiled detectives, this is a fast and easy-to-learn presentation of the rules with an abbreviated skill list heavy on charm.  Be A Pal, Be Sneaky, Gym Class, Science Class, and my personal favorite Play With Matches are all prime examples, condensing the Call of Cthulhu skill list to about 15 things.  "The Call of Kid-thulhu" rules make The Dare more than a scenario, because a Keeper could easily take them and spin out an entire campaign of kids versus the Mythos.  Stranger things have happened...like Stranger Things. 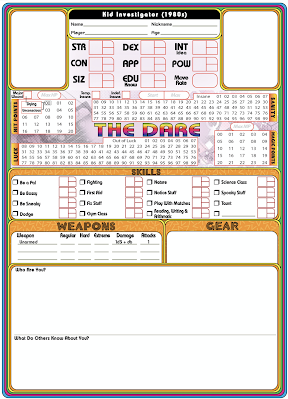 Which leaves us with the love letter.  From the front and back covers that have been made to look like battered old 1980s video cassette boxers (right down to the "be kind, rewind" sticker), to the character sheet, The Dare absolutely nails its source material.  And I mean all the source material; The Dare is painstakingly authentic to 80s adventure horror but it is also genuine Call of Cthulhu.  We are not talking Blood Brothers here, this is full-on Mythos horror.  Indeed, the layout and fonts are designed to look like Call of Cthulhu books from the 80s.  On the other side of things Brian M. Sammons closes the rules off with a terrific little survey of the 80s horror films that inspired The Dare, reminding us what a neat little trick the Sentinel Hill team has played here.  Like Pulp Cthulhu, The Dare manages both to be Cthulhu and to be its own thing.  If the gang is planning any follow up releases in "The Call of Kid-thulhu" subgenre, all I can say is "rad."