It's a surprisingly modern fable though.  The ancient Egyptians didn't inscribe curses on the walls of tombs for the same reason gravestones do not typically read "John Smith 1818-1898 - Rob this grave at your own peril."  The idea is generally so taboo people A) don't expect it to happen and B) don't like to talk about it if it does.

The stories really seem to begin around the 17th century, long before anyone could read the tomb walls to know whether they were cursed or not.  One story speaks of a Polish traveller who purchased a pair of mummies in Alexandria, storing them in the hold of a ship on the journey back home.  In a Dracula-esque turn the ship was plagued with storms and fog the entire voyage, and the crew haunted by nightmares of a pair of specters roaming the vessel.  This all ended when the mummies were tossed overboard.

In the Victorian Era, the idea became a staple of the gothic novel, beginning with Louisa May Alcott's (yes, THAT Louisa May Alcott) Lost in a Pyramid and culminating in Bram Stoker's Jewel of the Seven Stars, which did for the mummy legend what Stoker had done for vampires six years before.

The story didn't really enter popular consciousness until the opening of Tutankhamen's tomb in 1923 by British Egyptologist Howard Carter, however.   The deaths of Lord Carnarvon, his financial backer, Carter's secretary, a member of the excavation team, and even a visitor to the tomb ignited a mummy's curse media frenzy.  Nine years later Universal's The Mummy made the mummy's curse a horror film staple (though to be fair, the 1911 silent film of the same title was the first to show a revivified Egyptian corpse.  The rest as they say is history. 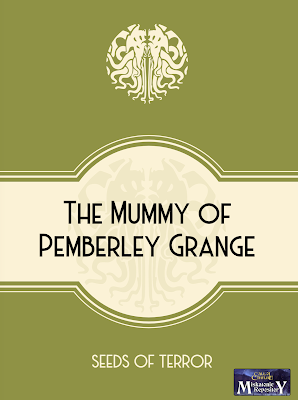 THE MUMMY OF PEMBERLEY GRANGE

All this having been said, when Type 40's new Miskatonic Repository offering, The Mummy of Pemberley Grange, asks us "Jessica Pemberley, rich socialite and Egyptophile, has shipped a mummy all the way from Cairo and has invited you to an exclusive "unwrapping party" at her manor house in the country...(w)hat could possibly go wrong?" we all know exactly what could go wrong.  That is exactly the point.  Written by Allen Carey and Nice Holland, Pemberley Grange is one of the "Seeds a Terror," a series of concise, easy-to-run Call of Cthulhu scenarios that can be prepped and played in a single session.  Part of the package is that these stories are built around well-known tropes...but come with an unexpected twist.  This time it is the old "mummy's curse."  Yes, Pemberly Grange comes with a deadly twist on this.  No, I am not going to tell you what it is.

Your purchase includes an 11-page PDF, a pair of well-rendered hand-outs, 5 pregenerated 1920 Call of Cthulhu characters ready for play, and really fantastic blueprints of Pemberley Grange, the setting.  A Keeper will be literally ready to run this in ten minutes, a feature that brings a sort of fast and ready Dead of Night approach to Call of Cthulhu.  My first thought was that Pemberley Grange ( and presumably the rest of the "Seeds of Terror") would be an ideal introduction to Call of Cthulhu paired with the Starter Set.   I mean let's face it, Masks of Nyarlathotep is not exactly what you would call beginner friendly!

By relying on a trope we all know and love, The Mummy of Pemberley Grange is able to tell its story from start to finish in four pages, and the twist here is simply delicious... If further "Seeds of Terror" contains similar clever twists, count me in. 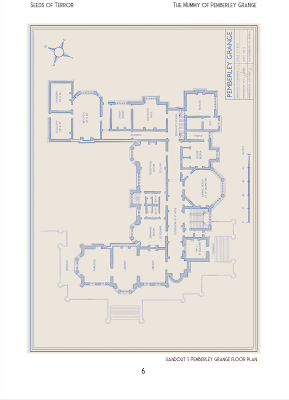