THE ADVENTURE OF THE GREAT HUNT: A KING ARTHUR PENDRAGON REVIEW

“For I have promised to do the battle to the uttermost, by faith of my body, while me lasteth the life, and therefore I had liefer to die with honour than to live with shame ; and if it were possible for me to die an hundred times, I had liefer to die oft than yield me to thee; for though I lack weapon, I shall lack no worship, and if thou slay me weaponless that shall be thy shame.”
Malory, Le Morte d'Arthur, Book IV Chapter X 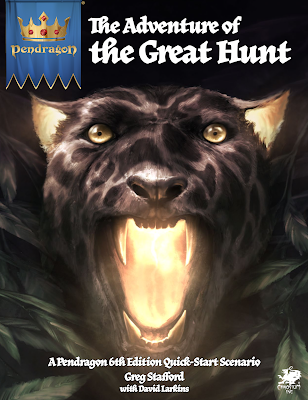 IF YOU HAVE READ any of the reviews here, you know I like setting the stage with backstory.  Games, like films or novels or any other sort of story, don't exist in a vacuum but have history and context.  In talking about The Adventure of the Great Hunt, a quick-start scenario that gives us a preview of next year's King Arthur Pendragon 6th edition, things are a little different however.  I've pretty much already set the stage in my 2019 review of the current edition.  If you would like more context, gentle reader, I refer you there.
The Adventure of the Great Hunt (hereafter just Hunt because nothing is as unlovely as typing TAotGH over and over again) is a free 26-page PDF released for WeAreAllUs 2020, a celebration of the life and work of Chaosium-founder and master game designer Greg Stafford.  Again, I have already written about Greg and how his passing affected me, so we can move on.  Greg considered Pendragon his masterpiece, and that is saying something.  Aside from creating Glorantha and Chaosium, his contributions to the hobby are staggering.  With Ghostbusters he gave us dice pools.  With Prince Valiant, the storytelling game.  As John Wick (Legend of the Five Rings, Houses of the Blooded, 7th Sea etc etc) put it, "if you believe you've come up with a clever mechanic, Greg Stafford already did it."  So it seems right for Chaosium to remember his passing this year with a sneak peek at what he considered to be the "ultimate edition" of his greatest game.
It feels a bit pointless reviewing free downloads.  If you are reading this review you probably already have it.  If you don't, I am not sure why you are reading the review.  Yet if for some reason you haven't gotten a copy yet, I urge you to do so.  Written by Stafford with assistance from David Larkins, layout by Simeon Cogswell, and art by Riley Spalding, Kalin Kadiev, and Eleonor Piteira, Hunt is a splendid little treasure, and eight-page scenario steeped in both the medieval tradition of the Hunt and in the Arthurian tradition of symbolic and/or magical beasties.  Set nominally sometime in the Conquest Period (519-530 AD) of the The Great Pendragon Campaign, the player character knights are guests of Sir Servause le Breuse, a renowned hunter.  After feasting his guests, Servause's household unexpectedly receives Sir Ector, foster-father to the King.  His lands are being ravaged by a dragon, and being of advanced age, no true knight could forgo aiding him.  Yet dragons are not easy creatures to beat, and Servause comes up with a novel suggestion that sets events in motion.
This is Stafford at the height of his Pendragon powers.  The set-up, where Servause makes his suggestion to the players, could easily come out of the pages of Le Morte d'Arthur.  For example;
“The panther is a great cat of variegated color, known for its kindness and gentility. All beasts are its friend—save for the dragon! When the panther has eaten its fill, it sleeps for three days. When it wakes, it emits a belch of sweet perfume, not unlike the aroma of all-spice..."
Much like Glorantha, the Britain of Pendragon is not the typical fantasy world of "mostly sciencey with a dash of magic added."  It is what Malory and other medieval romanticists thought it to be.  Hunt evokes this marvelously.  Playing through it, there is no doubt you are playing Pendragon.  It simply could be nothing else.
In addition to the scenario, there is a two-page appendix of hunting rules, three pages of pregenerated player character knights, and--in what I suspect many of you have been waiting for--a six-page preview of next year's 6th edition rules.
From the taste we have been given here we are looking at more of a refinement than an overhaul.  There are tweaks, but nothing quite like the changes between, say, the 3rd and 4th editions (yes, "Celtic magic system," looking at you).  The Appearance Attribute, for example, is now "Appeal," but functions the same way.  The most interesting tweak is the apparent highlighting of "Honor."  Always a vital part of the game, it now seems to have been elevated up beside Glory in what drives and motivates a knight.  Glory accumulates, but Honor can be lost, and if too much is lost, the character is no longer recognized as a knight.  As I said, this was in Pendragon before, but it seems spotlighted in this preview. 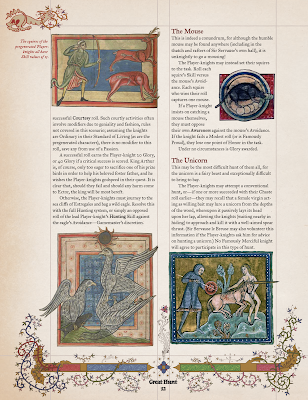 There are a few other surprises, but people new to Pendragon will not notice and experienced players should probably just download the PDF and take a look.  One thing that should be said, however, is that the look of this PDF bodes very well for the new edition.  Pendragon 5.2 is a fine looking book, but the design here suggests the new Pendragon will be more like Call of Cthulhu 7th edition or the new RuneQuest in being laid out with richer backgrounds and better art.  The PDF genuinely looks like an illuminated manuscript.
This is a terrific Arthurian adventure, and the perfect example of why Pendragon remains one of the best loved and most celebrated games of all time.  Veterans will love it, and it is just light enough to introduce new players to the game.  As a free gift to fans, it is a perfect way to remember Greg for 2020's WeAreAllUs.  I suspect that watching us from distant Avalon (or probably, knowing the old shaman, from visions in his Crystal Cave), Greg is grinning. 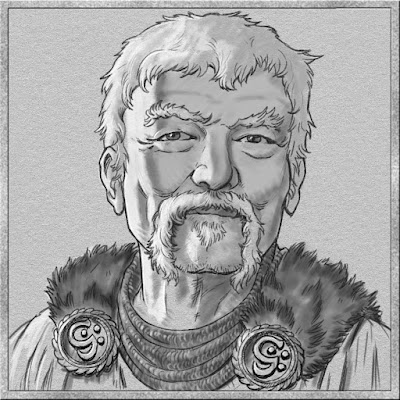