THE CHILDREN OF FEAR: A CALL OF CTHULHU CAMPAIGN

I’ve also been digesting something of vast interest as background or source material... ...the Atlantis-Lemuria tales, as developed by modern occultists & the sophical charlatans. Really, some of these hints about the lost “City of the Golden Gates” & the shapeless monsters of archaic Lemuria are ineffably pregnant with fantastic suggestion; & I only wish I could get hold of more of the stuff. What I have read is The Story of Atlantis & the Lost Lemuria, by W. Scott-Elliot.
HP Lovecraft to Clark Ashton Smith, 17 Jun 1926 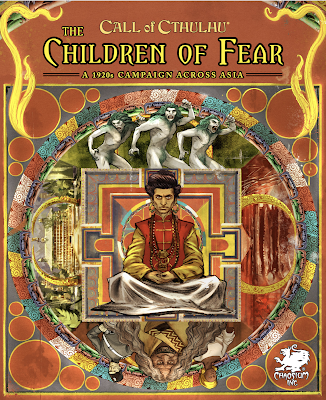 MYTH MAKER, PSUEDO-HISTORIAN, and professional digger of rabbit holes Helena Petrovna Blavatsky (1831-1891) casts a long shadow.  The co-founder of the Theosophical movement, her best known works are the sprawling, convoluted, and completely bonkers Isis Unveiled and the less sprawling, but arguably even more convoluted and bonkers Secret Doctrine.  These are works which purport to reveal the "secret history" of the world, a saga that covers millions of years and a half-dozen "root races," including Hyperboreans, Lemurians, and Atlanteans.  A seventh race is predicted on a continent or island that will rise in the Pacific, before everyone ascends and migrates to Mercury.
Still with me?
The "long shadow" I referred to extends far beyond the Theosophical Society, which continues to exist today.  Blavatsky's influence on Western esotericism is evident in both the Golden Dawn and Aleister Crowley, with their reliance on ascended "Secret Masters" guiding the destiny of the world, as well as the Aryan pseudo-anthropology that fueled the Nazis.  Her ideas also appear throughout 20th century weird fiction, all the way from the pulps to works like the Illuminatus! trilogy.  There are shades of Blavatsky in Robert E. Howard, in Clark Ashton Smith, and of course in Howard Phillips Lovecraft.  Yet to my mind Blavatsky's most significant influence was on bringing Hinduism and Buddhism into the West.  Now, I would be remiss as someone who started his career in the field of religious studies (specifically in Eastern religions) if I didn't mention she got everything all wrong (I did mention bonkers twice), but the fact remains that she did ignite tremendous interest in Europe and America in things like reincarnation, the kalachakra or "cycles of time," and even in mythical cities like Shambhala and Argartha.
Which brings us, at last, to The Children of Fear. 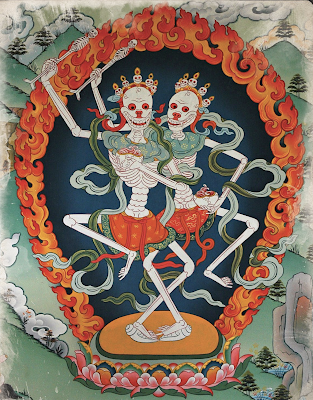 Roughly the same size as Blavatsky's Secret Doctrine, this massive 418 page campaign takes Call of Cthulhu east into China, northern India, and Tibet, and is rooted in the mythology of that region...well, sort of.  Because this is Call of Cthulhu, not Eastern Studies 101, so naturally the campaign leans heavily on the pseudo-history and weird fiction traditions inspired by Theosophy.  A telegram drags the Investigators into the struggle between Shambhala--the Land of Living Fire--and Argatha, the City of Fear.  Mentioned in both the Kalachakra Tantra and the Vishnu Puranas, Shambhala is spoken of as a city or kingdom which will be the birthplace of Vishnu's final incarnation before the end of the current world.  For Theosophists, it was the city of "the Sons of the Fire Mist," godlike beings who overthrew the evil empire of Atlantis 12,000 years ago.  In The Children of Fear, however, Agartha replaces Atlantis as Shambhala's rival.
While Shambhala is generally regarded as the "good guys," Agartha gets cast as both good and bad.  In some legends Agartha is an advanced empire inside the hollow Earth, of which Shambhala is the capital.  For Theosophists, Agartha was a subterranean kingdom beneath Tibet and populated by demons.  This is more the treatment it gets in The Children of Fear, where the plot revolves around preventing the sealed gates of Agartha from opening and releasing the King of Fear from emerging and ending the current age of the world.

Now I have been yammering on about Theosophy for a reason.  The Children of Fear is refreshing in that it is not necessarily about the Cthulhu Mythos at all.  It could be run as an occult thriller, with nary a reference to Outer Gods, Old Ones, or familiar alien races.  Compatible with both standard Cthulhu and Pulp Cthulhu, the Keeper could easily portray the antagonists here as Buddhist demons, wicked ascended masters, or one of Blavatsky's Root Races run amok.  They could just as easily make the cities the strongholds of Lovecraftian gods or Old Ones.  The book contains comprehensive guidelines on going in either direction and in shaping the campaign into exactly what you want.
Before we move on from this point, I need to add that it is about d*** time.  Call of Cthulhu says, right on the cover, "Horror Roleplaying in the Worlds of H. P. Lovecraft" (emphasis mine).  Long before "The Call of Cthulhu," "The Dunwich Horror," or "The Shadow Over Innsmouth," Lovecraft was writing weird fiction that arguably had nothing to do with what would come to be known as "the Mythos."  It really wasn't until late in the game that the concept of a unified universe of horror emerged.  It is easy to see The Children of Fear as being inspired by something he wrote in his earlier pre-Mythos days.  If your characters roll their eyes and say "oh no, not another shoggoth, this might be the campaign for you.
Across eight-chapters, which like Masks of Nyarlathotep are explored or not explored in an order determined by the player character Investigators and not the Keeper, The Children of Fear explores a setting that has nothing to do with Arkham or Miskatonic University, and that is refreshing too.  Loaded with hand-outs, pre-generated characters, new monsters, new spells, and a ton of resources, The Children of Fear is more evidence that Chaosium has cracked the code on how to make a massive, sprawling campaign accessible.  There is some terrific storytelling in there as well, none of which I can give you without spoilers. 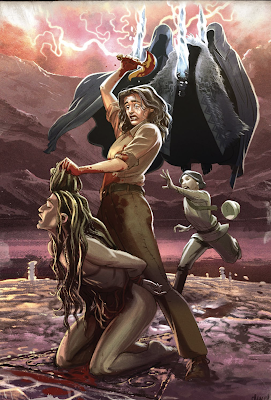 With art by Kristina Carroll, Caleb Cleveland, Mariusz Gandzel, Doruk Golcu, Katy Grierson, Sija Hong, Victor Leza, Pat Loboyko, Magda Mieszczak, and Mali Ware, it is also another example of Chaosium putting together a gorgeous looking book.  Given the setting, it is also a very different style of art, much of it reflecting local sensibilities.  This gives it a fresh, vibrant look and feel.  Nicholaus Nacario's lay-out is terrific as well, fitting this book in nicely with the other recent 7th edition titles.
This is another campaign you are going to want, especially if you have any interest in a Call of Cthulhu campaign that shakes things up a bit.  Full of colorful detail and explanation, you need know nothing about Theosophy, esoteric Buddhism, Chinese legends, or Tibet to run it.  It has all the detail you need.
Posted by Andrew Logan Montgomery at 11:37 PM