DECEMBER OF 2019 saw the final blog post of my Six Seasons in Sartar/River of Cradles campaign. We were 16 sessions in. Breaking for Christmas and New Year, we made plans to meet up for the next chapter in late January 2020.

Here in Japan, the news media was abuzz with a story about a quarantined cruise ship, the Diamond Princess out of China. Apparently several people aboard were infected with some new and puzzling illness. People started wearing masks. Things ground to a halt, and we delayed the session.

You know the rest. Everyone reading this has lived it.

As I mentioned in the last post, I used the suspension of the campaign as a chance to put Six Seasons in Sartar on paper and let it loose on the world. As the pandemic dragged on endlessly came The Company of the Dragon. But now, with my gaming group now fully vaccinated and infection numbers in Japan starting to head in the right direction, we have started talking about resuming the campaign. With nearly two years of water under the bridge, however, we decided to restart it instead of resume. The "Six Seasons in Sartar" we played was not the Six Seasons in Sartar that was published, and the campaign that followed at our gaming table, "The River of Cradles," was totally unrelated to The Company of the Dragon. We decided to start all over again and play the two published campaigns.

The twist is, the group decided to play the same characters all over again. This meant translating a party of Heroquest characters to Runequest Roleplaying in Glorantha. 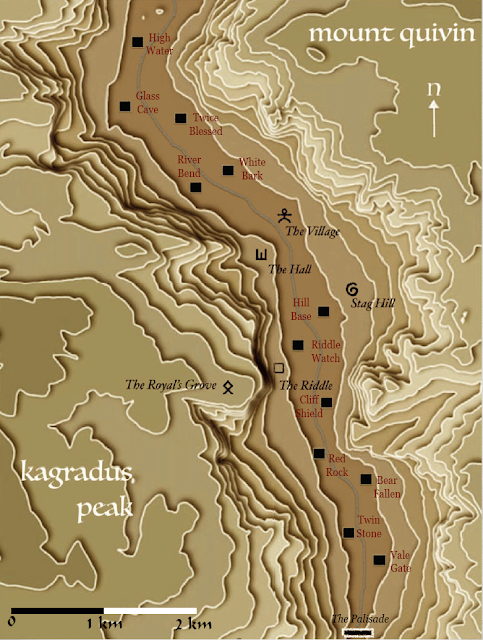 Black Stag Vale, the setting of Six Seasons in Sartar. My map, annotated by Nick Brooke

"Translating" might be the wrong word for how we handled character creation. More of a "reset." I told them to think of this new campaign was a remake, and I made it clear that the characters could be different in any ways the players wanted. We didn't have to fuss with converting abilities across the two systems. It was a simple question of starting the player characters from scratch with the same concepts in mind...and in a new system, which turned out to be an important factor.

Back in 2018 my players were new to Glorantha. The idea of using Heroquest was that they could create their characters "as they went," fleshing the characters out as they played the campaign and grew to know more about the setting. The problem with that is that the characters did not start with a strong, defined concept. They were amorphous and "fuzzy." I don't think they really came into their own until a dozen sessions in. In retrospect, this is my primary criticism of Heroquest (and for the record I mean the second edition, both Hero Wars and Heroquest first edition offered a lot more detail). It is a great game system if you have players who know the setting, but does little to support those who don't. Note this is not a criticism of the mechanics; I feel the system needs a more defined Glorantha "genre book" to make it feel more true to the setting. This is something I am hoping Questworlds will eventually fix.

RQ by contrast contains tons of information about the setting right there on the character sheet. The Runes, the skills that exist in the setting, the characteristics that define people, are all right there. I found it helped my players focus this time more clearly on who exactly their characters were. They had felt a bit lost and bewildered when we started HQ. "But what does the Heortling Keyword actually do?" This time they had a lot more information to work with.

Now, the original characters from the HQ version were: