WE CANNOT DISCUSS BLACK SPEAR until one thing is made absolutely clear.

Glorantha was cooked up in the brain of a shaman. 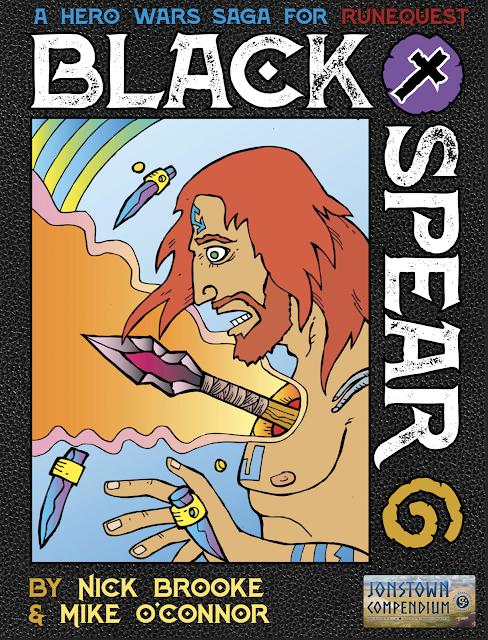 If we strip shamanism of its diverse cultural variations, the shared core is all about ecstatic experience. "Ecstasy" is the critical word there. It comes to English from the Latin and it from the Greek, but in a nutshell it means "to be out of the normal." Ekstasis was used to mean insanity, astonishment, and in the New Testament a trance state...in other words, an altered state of consciousness. Whether it's Tibetan trance oracles, ayahuasca in the Amazon, or peyote among Native Americans (an experience this author highly suggests you try), shamanism is at least in part about leaving the normal behind and entering the psychedelic (which itself comes from two Greek words meaning "make the mind shine"). Greg Stafford was a practicing shaman, and thus it should surprise no one that Glorantha is very psychedelic. Greg understood that roleplaying games are altered states of consciousness, playing them we leave behind the normal world and have a shared hallucination, and just like shamans, those psychedelic experiences challenge us and if we are lucky change us. All RPGs are like that, sure, but in Glorantha it is up front and baked into the setting. I mean, what do you think a "heroquest" is if not a psychedelic roleplay experience?

All this bears mention because Nick Brooke's Black Spear could not possibly exist anywhere BUT Glorantha.

First the basics. Black Spear is a 181-page PDF, available exclusively from the Jonstown Compendium. Written by Brooke and phantasmagorically illustrated by Mike O'Connor, it is in Brooke's own words "(a)n epic saga of the Hero Wars, festooned with heroquests and deep Gloranthan weirdness. Probably the strangest thing I’ve ever written." I am not inclined to disagree with him. If your Glorantha is a deadly serious recreation of life in the Bronze Age, this is probably not the product for you. On the other hand, if your Glorantha is a lozenge under a sky dome peopled with talking baboons and yes, ducks, if your Glorantha embraces the essential surreality and psychedelic facets of the setting, then this is very much the product for you.

As we are talking about a scenario here, there is not all that much I can say without spoiling it. Written in seven acts, most forming a distinct adventure, the player characters are assumed to be Sartarites of the Colymar tribe. Following the death of Prince Kallyr, your tribal queen, Leika, asks you to go to New Pavis to invite its king, Argrath, to come to Sartar and take the throne. To show her seriousness, she entrusts the characters to bear a token to bring to him. Hint, it's titular.

Getting there is half the fun. Doing so might involve the characters seeking modes of magical transportation that hearken back to White Bear and Red Moon and Nomad Gods, being potentially man-handled by baboons, entangled in the rituals of disco newtlings (yes, you read that correctly) and caught up in an epic power struggle in Sun County. Along the way, they are haunted by strange dreams and reality seems to be breaking down the closer they get to Argrath...who here is Kurtz wrapped in his very own Heart of Darkness. 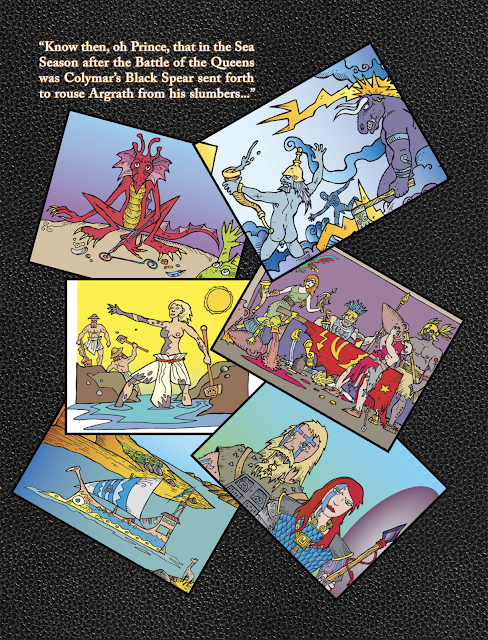 Full disclosure; I've been aware of Black Spear for some time now, ever since Nick Brooke and I discovered we were both writing Prax-centered Heart of Darkness tales. But Black Spear is nothing like my Final Riddle, in part because there is nothing else quite like Black Spear. There are some very deep dives into Gloranthan lore here, some terrific heroquests, but Black Spear also leans into pop culture and some really trippy shit, man. That is what I think is brilliant about it. There is absolutely no mistaking the setting it was conceived for. This could never unfold in Middle-earth, Thedas, or Westeros. This is some top shelf, high-grade Gloranthan-psychedelia.

I simply cannot recommend it highly enough. It's a slickly produced and wonderfully illustrated feast for the eyes, with tons of options and support for GMs taking it on (with plenty of advice on making it more "vanilla"). This is one journey upriver that you and your players are going to want to take.

Posted by Andrew Logan Montgomery at 3:38 AM