A LOT OF THE PRODUCTS coming out of the Jonstown Compendium have been, shall we say, "experimental." By this I mean products that took RuneQuest in directions different from the ones Chaosium was taking. Right out of the gate Nick Brooke gave us A Rough Guide to Glamour, which while being a terrific overview of the Lunar capital also had its tongue firmly in its cheek, and was peopled by a cast of characters who looked suspiciously familiar. Six Seasons in Sartar soon after introduced ideas like shorthand character statistics and squabbling academics arguing the finer points of an epic poem which never existed. Tales of the Sun County Militia, in both art and attitude, demonstrated a rebel streak. I could go on, but the Jonstown Compendium was clearly a place to put on full display "Gloranthas That Varied." 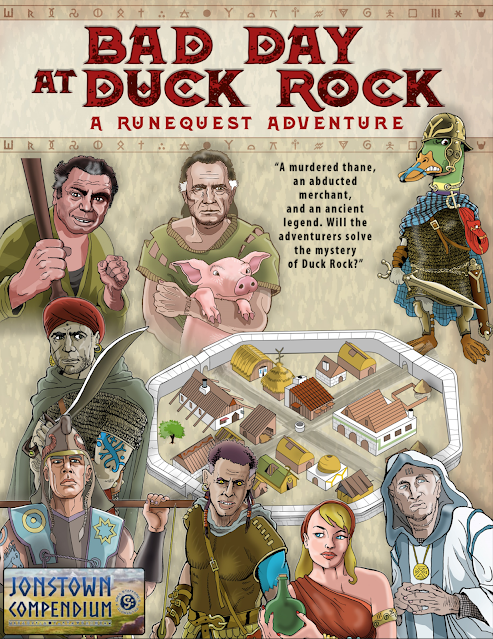 In Bad Day At Duck Rock author Peter Hart does something very different. He gives us a thoroughly classic adventure...and by that I mean a call back to the earliest days of RuneQuest but this time with far superior art, lay-out, and editing. Reading through it, I was reminded of Apple Lane seasoned with shades of Griffin Mountain. It is an adventure for the latest edition of RuneQuest, of course, and is set in the post-Dragonrise timeline, but in spirit this is a visitation from the Ghost of RuneQuest Past.

In retrospect, that is experimental, isn't it.

Weighing in at 79 pages, this PDF is lavishly illustrated by Dario Corallo. Because this is an adventure--and a mystery on top of that--there is very little I can say that will not spoil it. In the author's own words;

The adventurers are escorting a merchant, Tiberian Oneprice, through Duck Valley with a shipment of bronze, silver and gold ingots, acquired from Dwarf Mine, their destination being the village of Man Vill in Beast Valley. Tiberian orders the adventurers on to the village of Duck Rock to secure rooms at the inn and trade with the local redsmith. Meanwhile, the merchant heads off to visit a pair of old friends, both sages of Irripi Ontor, at their farm to the north of the village. What could possibly go wrong?

The adventurers will have to navigate through multiple challenges as they meet the villagers of Duck Rock, bandits, chaos, undead and of course, ducks.
With this set up, Hart sets up a race against time filled with all sorts of iconic RuneQuest adversaries, potential adversaries, and allies. This is part of what I mean about it being a "classic" adventure. All the old favorites seem to show up in its pages. The adventure will probably fill several play sessions, but the book is also crammed with ideas and tools you can easily borrow or use to build a foundation on. There are even clever links in it to past publications.
And Great Orlanth does this thing come packed! There are forty pages of statistics in the book's back end, including the introduction of a new monster I am not at all sure I know how the Glorantha Bestiary could have missed. There are real shades of Griffin Mountain in how complete a sandbox Hart has constructed for you to play in here. You might never meet all these characters, but the fact of their existence gives Duck Rock and its environs verisimilitude a lot of modern adventures forego. This is a setting your characters can feel free to wander anywhere in. 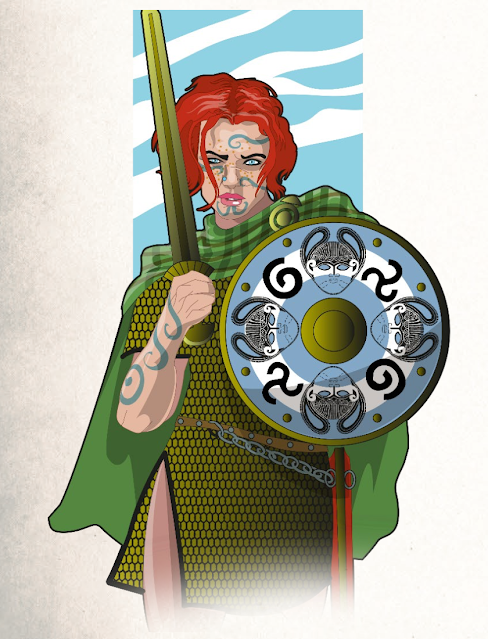 It is also an adventure I would heartily recommend to a new GM. Bad Day at Duck Rock is written with terrific clarity and care, with support at every twist and turn to help GMs run it. Nothing here comes off fuzzy or half-baked. I get the definite feeling that in the years this was playtested, Hart took the opportunity to refine, retool, and clarify. It assumes the use of the pre-generated characters from the RuneQuest core rules, but again is filled with examples of how to tweak things if players use characters of their own making.
If you favor the sandbox approach to play, Bad Day in Duck Rock is ideal for you. If you still love your Apple Lane, this is right up your alley. If you are a GM who appreciates support and detail in an adventure, but it. If you are looking for an adventure that will keep you entertained, guessing, and delighted by the large and colorful cast of characters, what are you waiting for? It is a terrific entry to the Jonstown Compendium.
Posted by Andrew Logan Montgomery at 6:30 AM