THE CATTLE OF CTHULHU, a review of GET ALONG, LITTLE DOGIES

IT IS GENERALLY AGREED that 1979's Alien is essentially H. P. Lovecraft in space. It's not a perfect match--HPL was not big on working class heroes and no one delivers long monologues on the insignificance of humanity or the benefits of ignorance--but hey, one of the survivors is a cat, and that he would have approved of. The gist of the film is a group of people are out traveling the space lanes when they run into something, well, alien. Not Star Trek or Star Wars alien, no, this is the kind of alien that the more you think about facehuggers the longer you are put off wanting sex. The kind of alien that you cannot wrap your brain around. The kind of alien that is inimical to humanity.

Now I mention Alien because the crew of the USCSS Nostromo are just hard-working folks out there in the middle of nowhere doing their jobs, people trying to put food on the table. They weren't asking for any of this. They are not big bad space marines out on a bug hunt (Aliens), psychopathic inmates (Alien 3), or military doctors looking for the ultimate biological weapon (Alien Resurrection). The Nostromo crew are just operating a space tug, bringing cargo from point A to point B. Basically, they are space truckers on a long, desert highway. Or, if you think about it, cowboys out on the range.

2017's Down Darker Trails brought Chaosium's Call of Cthulhu to the 19th century American West, but Trails paints with broad strokes, covering the entirety of the "Old West" setting. What John LeMaire's Get Along, Little Dogies--a new supplement for Down Darker Trails available from the Miskatonic Respository--does is to focus on one aspect of that setting. It is 134 pages zeroing in on the "cattle drive." In other words--and I swear this is the last time I will beat the Alien analogy like a dead horse--John is concentrating on the helplessness, the isolation, of crossing a wide, empty expanse and encountering the Mythos far from the streets of Kansas City or Tombstone.

Out on the range, no one can hear you scream. 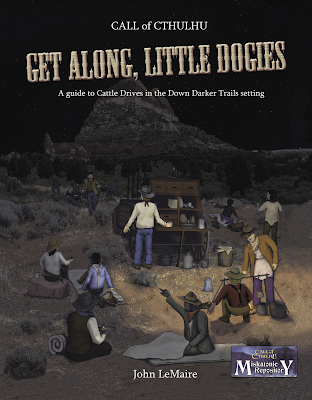 If I lost you back there, let me explain. The Miskatonic Repository is the Call of Cthulhu equivalent of the Jonstown Compendium for RuneQuest. It is Chaosium's community content program for its immensely popular and venerable game of cosmic horror.

"Community content" is a slur in some circles, but those circles are continually getting smaller. With ENNIE award wins and bestselling titles, venues like Miskatonic and Jonstown are increasingly holding their own. As pointed out by Chaosium's own community ambassador Nick Brooke recently, they allow authors to do the kinds of projects that a publisher like Chaosium can't, either taking their games is bold new directions or diving deep into specific aspects of their settings. The latter is what John has done for Down Darker Trails. 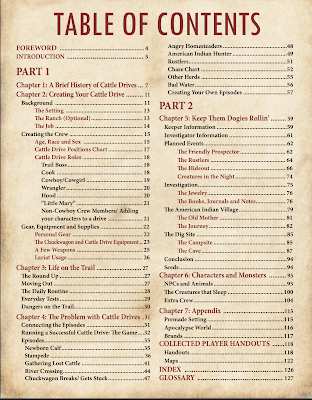 In Part 1 Get Along, Little Dogies starts by giving you the reality. John provides a history of cattle drives in the American West and a discussion of their difficulty and necessity. There are in-depth explanations of where and when these drives happened, the various roles people played in them, and what it was actually like to be out there on the trail. All the terminology is there, the little details, and the author has to be commended for his exhaustive research. Useful spotlight rules are included, like a full page on lariat usage. Chapter 4 presents a number of episodes, "mini-scenarios" like "Gathering Lost Cattle," "River Crossing," and "Stampede" that turn the realities of the cattle drive into gamable challenges to play out at your table. Reading this chapter I kept thinking how much fun it would be to spend an evening just roleplaying a cattle drive sans the Mythos.

But that isn't really what we are here for, and it is in Part 2 we are presented with a 40-page scenario that shows the Mythos colliding with characters just out there doing the job. Playable in a single session, "Get Them Dogies Rollin'" could easily be expanded with the episodes mentioned above, and could serve as a terrific springboard into a greater Down Darker Trails campaign. 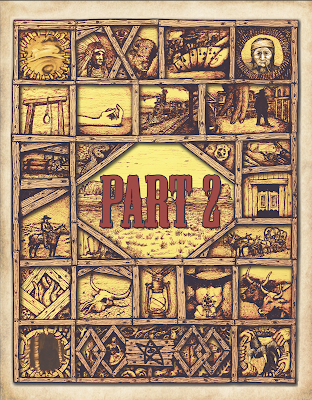 Obviously I am going to get necessarily vague here to avoid spoilers, but I will say the scenario is a memorable one, both for the uniqueness of the situation and setting and the way John has woven those all-too-familiar Lovecraftian tropes into the mix. The story provides a number of challenges both real and Cthulhian, and an escalating sense of dread.

The book rounds out with tons of NPC statistics, as well as stats for cattle, horses, and the scenario's new creatures. A few premade settings are offered to launch the story, a mix of believable historical ones and...well shall we say a "darker" option. Get Along, Little Dogies holds its own nicely against any 7th edition Call of Cthulhu title, and that is a remarkable achievement for a one-man operation. It looks and feels like a 7e title should (and given the praise I have lavished on 7e products here that is saying something). Full of maps, detailed statistics, and a plethora of character hand-outs it is clear that the author has put the work in. There is art on nearly every page, a mixture of period pieces and the author's own work. If you like Down Darker Trails you are going to want Get Along, Little Dogies. It is a terrific expansion full of ideas to be mined. As mentioned its core concept--you out there in the desert, in the darkness, isolated and alone--ratchets up the horror. Yet even Basic Roleplaying players interested in historical roleplaying (or players of a game like Deadlands for that matter) will not be disappointed by this title. The author has clearly already put in the blood, sweat, and tears of research so you don't have to.