“I see. I look foul and feel fair. Is that it?”
- Strider, The Fellowship of the Ring 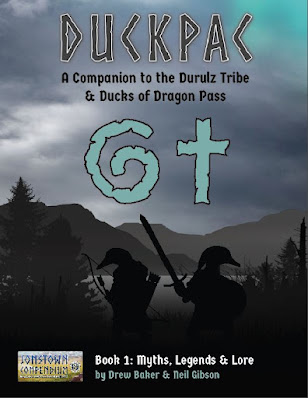 GREG STAFFORD's "GLORANTHA" is a flat world floating on a cosmic ocean. The sky is a dome. Metal comes from the bones of dead gods. Elves are sentient trees. Giant babies float down river on ark-sized cradles, and once my player character was hired by a talking fish. Yet with all this wonderful madness, the one element of Glorantha that is certain to generate controversy and complaints are the Ducks.
"Durluz," if you're nasty.
Ducks have been there from the beginning. "This is a race," RuneQuest informed us in 1978, "cursed by the gods during the Great Darkness...(i)t is unknown whether they were originally human and became feathered and web-footed, or originally ducks cursed with flightlessness and intelligence." Hardly comical, they are a cynical and grim race who manage to survive on the edge of Delecti the Necromancer's marsh. Hunted and hated, it is seldom wise to piss one of the little buggers off.
I am firmly in the camp that loves the Durulz, and when the AD&D crowd used to sneer at our Gloranthan Ducks back in high school I sneered right back at their hairy-footed halflings. I am loud and proud in my Duck defense. And thank the gods that I am clearly not alone. Authors Drew Baker (Highways and Byways, Return to the Big Rubble, Gloranthan Family Backgrounds, etc)  and Neil Gibson (Legion) have joined forces on not one, not two, but four Duck-tastic Jonstown Compendium releases (the fourth as of this writing is not yet released) detailing the race. With a wink and a nod to the classic Gloranthan Trollpak they are calling the line DuckPac.
DuckPac has been released separately, but I suspect we might get a bundle down the road (this has been the pattern with Baker's releases). I will talk about the three titles currently available here.
Book 1: Myths, Legends, & Lore is pretty much as the title says, a 52-page PDF  introducing the Durulz of Dragon Pass. The real meat of the book begins on page 12, where the Ducks tell us their origins, how they came to be named, all about their culture and lifestyle, then about their anatomy.
There is then a long and frankly moving section on the "Duck Hunts," one of the darkest chapters of their recent history. This is where the Duke paradox (see, I resisted the urge to say "pair of ducks" there) is truly highlighted. Our first instinct is to see them as comical, but in reality, Glorantha uses the Ducks to explore some very dark territory indeed. The "Duck Hunts" are nothing less than a pogrom, an attempt at genocide that mirrors some of the least savory chapters of terrestrial history. The treatment the authors give it here is grim--this is not a book for kids--but masterfully illustrates why the Ducks are far more than a punch line. They are, in fact, the underdog and a very persecuted minority. The secton on the "Duck Hunts" drives that home beautifully.
The book finishes out with a gazetteer of Durulz lands, complete with a map (see below). 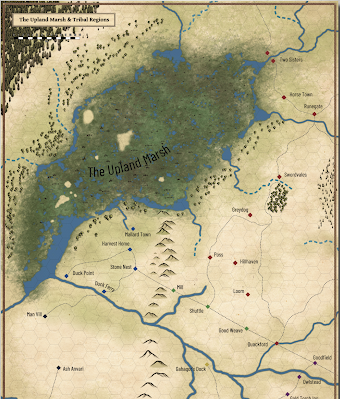 Book 2: Duck Adventurers is 90 pages on creating Duck player characters. This book mirrors the "Adventurers" chapter of the core RuneQuest rules and like them, includes several pregenerated characters. They start with Homeland and then go into Family History, which includes a section on the infamous "Duck Hunts," a generational trauma that will likely color your character's perceptions and feelings. Rune affinities follow, as do Characteristics, Occupations, and Cults. There are not a lot of surprises here. Occupations are familiar to us from the core rules but rewritten with a Duck focus (and we do have the new Occupation "Kafari," Ducks who master the business of river trade). There is a Duck name generator, the return of the "What the Such-and-Such Tells Me," a popular RQ/Glorantha tool that has an elder of the culture answering questions for younger members, and a terrific end section on playing Ducks. This includes a new table of Duck-sized weapons, a discussion of Duck movement rates, how to address the stereotypical "cowardice" of Duck characters, and a surprisingly detailed section on underwater combat. Then, if this was not enough, a terrific section of Duck specific items and artifacts. We finish with pregenerated characters and a sample Duck settlement. 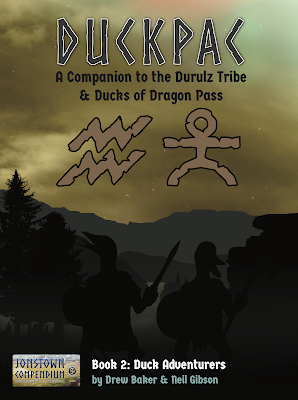 Now, before we get on to book three, we need to talk about art and layout.
I've been saying in several of these reviews that it is really getting harder to tell what is a Chaosium product and what is a Jonstown Compendium product these days. DuckPac exemplifies this. With art credits going to Drew Baker, Neil Gibson, Tania Rodriguez, Rick Hershey, Lee O'Connor, Dominic Reardon, John Spelling & Forge Studios, these are the best looking Ducks I have seen in 40 years of playing RuneQuest. The tables, the maps, the diagrams, all are top notch. See for yourself: 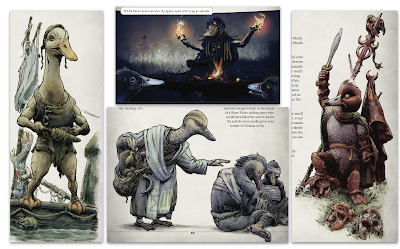 With Book 3: Redfeather Dreaming we have a 133-page soloquest, a tradition I know I am not alone in being delighted to see revived for RuneQuest. Obviously this is the book I can say the least about, but it consists of more than 300 scenes or "story fragments" that have a high degree of replayability and could easily be adapted for a GM to run for a player.
While the Ducks have had a sourcebook before (Mongoose published a Duck book for their version of the game), this is the first time we have ever seen anything worthy of the classic TrollPak. DuckPac is brilliant, a cohesive, sensitive, and sometimes tongue-in-cheek examination of what arguably is Glorantha's most iconic species. It's a "must have."
Posted by Andrew Logan Montgomery at 6:25 AM