TALES OF THE SUN COUNTY MILITIA: SANDHEART VOLUME ONE (A REVIEW) 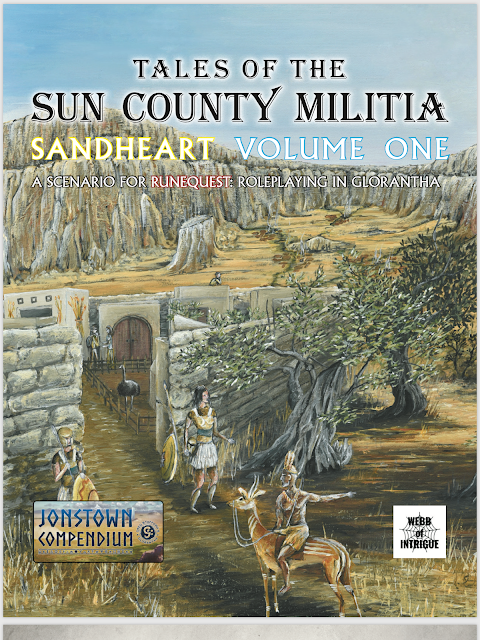 INASMUCH AS ROLEPLAYERS "like" the idea of settings different from our own world, we don't seem to like them to be too different.  Sure, castles and knights are fun, but the whole "women as second class citizens" business?  Not so much.  The speakeasies and jazz of New Orleans in the Roaring Twenties are great...let's just ignore the Jim Crow laws.  We enjoy using roleplaying as a window into the Other, but like Narcissus what we really want is to see our own face, the familiar, reflected back at us.

The most successful RPGs do this; the best do it well.  In the 70s D&D had absolutely nothing to do with Europe or the Middle Ages; written by Americans for (at the time) an American audience, the game was basically the Old West in Renaissance Faire drag.  There were alignments instead of White and Black hats, but it was still about swaggering drifters riding from town to town proving their badassness and making fistfuls of cash doing it.  The feudal system?  Vassalage?  Nah...you made enough money to buy your own land and build yourself a fort at 9th level.  It was a stroke of genius, really.  TSR served Americans Tolkien with all the confusing British bits removed.

I would argue that Greg Stafford's Glorantha was a masterpiece of this principle, and for the very simple reason that it was built on myth.  Set in a Bronze Age world--and a flat world under a sky dome at that--20th (and later 21st) century players could nevertheless see the familiar reflected back at them in it.  The reason is simple; myths are timeless.  Yes, we can all sit around and debate "who the Lunar Empire is."  Like looking at Rorschach blots you see what you are familiar with.  They could be the Romans.  The Persians.  Assyrians.  But for a kid playing RuneQuest in Reagan's America, we knew damn well who the "Evil Empire" was.  Hell, they were Red too.

The same goes for the Heortlings.  If you live in England, I suspect they look Celtic.  Northern Europe?  Probably Norse.  My friends and I thought they were clearly Mycenaean.  After Braveheart, they suddenly had woad and kilts.  But of course they are all of these things because Glorantha is this titanic genius mirror that shows what you want to see in it.

The best RuneQuest supplements (and for brevity's sake I am including Hero Wars/HeroQuest/Quest Worlds and 13G under that label as well), understand Glorantha is a mirror and use it as such.  Sure, it's a polished bronze mirror, of course, but we recognize ourselves in it all the same.  Think back to the classics, like Pavis, The Big Rubble, and Borderlands.  New Pavis is not a terribly accurate recreation of any actual Bronze Age city, but it is a mythic mirror of Tombstone, or San Francisco during the Gold Rush, a boom town where an intrepid adventurer can make a name for themselves.  If you are Australian, New Pavis might be "The Alice," with adventuring stockmen traversing the "Red Center" of the Praxian wastes.  The classic RQ supplements never got bogged down in the scholastic gobbledygook of recreation.  This is what made them great. 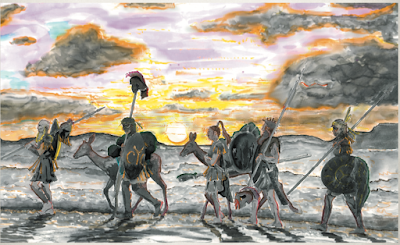 Tales of the Sun County Militia: Sandheart Volume One is another example of an RQ supplement that "gets it." I am reviewing specifically here the "remix," a 103-page expanded version of the original 39-page (!!!) Jonstown Compendium offering.  Written by Jonathan Webb, with help from Nick Brooke, Darren Page-Mitchell, and Shaun Rimmer, what stood out to me reading it was how intuitively the authors understand why Glorantha is such a powerful setting and how to use that to their advantage.  Indeed, right from the very start on page 1 it is made clear to us that Sandheart is going to be a sort of dialogue between Bronze Age societies and our own;

It could also be argued that it (Sun County) is a xenophobic, misogynistic, repressive and strict culture. Although this goes against many of the values and virtues of a 21st Century culture, it also presents the player characters plenty of opportunity to both uphold the more noble values of Sun County whilst, at the same time, reeling against such a system. There is plenty of opportunity for role-playing the conflict between the nature of the county and the nonconformist nature of player characters. The secret is to make these conflicts fun and part and parcel of your game...

In this succinct passage, Sandheart makes clear something that took me a dozen boxed texts in Six Seasons in Sartar to do, namely, to suggest that instead of whitewashing Glorantha or remaking it into something more palatable to us, it might be more useful to engage in a dialogue with it.

Now the book itself contains a single scenario, "No Country for Cold Men," as well as a detailed look at the Sun County hamlet of Sandheart.  Two further volumes, The Corndolls and Tradition, also available from the Jonstown Compendium, continue the campaign.  Sandheart is not a large community, only about 100 souls call it home, but it is lovingly detailed in glorious depth.  It's people, its environs, its mysteries are all there. 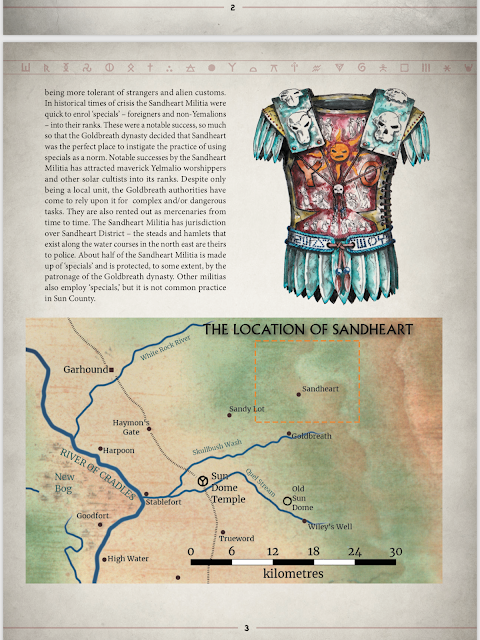 The heart of the book however is the Militia, because your player characters are it.  This is where the mirror comes back into play again, because Sandheart feels a bit like a police procedural.  Your characters enforce the law.  You are going to come up against lawbreakers, and it isn't always black and white.  So what do you do?  It's nice to get away from the Heortling Clan campaign but still see how adventurers in Glorantha work best as part of a society, rather than outsiders to it.  There is tremendous potential in Sandheart to capture the same feel of all those cop shows were tough choices are made.

"No Country for Cold Men" is the centerpiece here, and I don't want to spoil it for you except to say that the Militia is up against a gang of drug runners here.  I am going to use this opportunity to segue for a moment to the layout and the art.  Because it is here in Marc Baldwin's iconoclastic sketches that the Gloranthan mirror principle comes back to the fore.  Gloranthan art has always had a wicked streak, going through the decades often with tongue firmly in cheek.  I think back to the Argan Argar with his sunglasses and parasol.  Baldwin does it here by giving some of the NPCs direct references to our own world.  Let me show you an example; 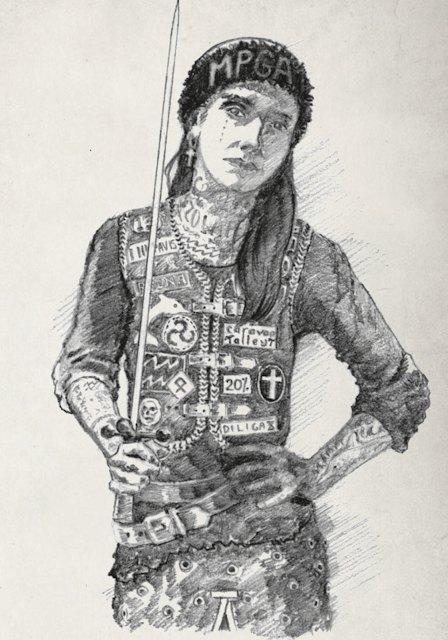 The "Make Pavis Great Again" logo also appears in some graffiti.  No, it isn't Bronze Age.  But neither, really, is Glorantha.  In a subtle reference to 21st century America, connections and reflections are happening again between two societies fallen on hard times where people turn to drugs. 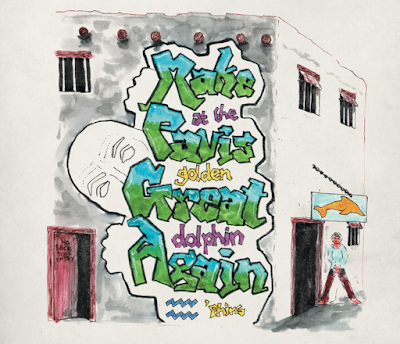 Baldwin does the bulk of the heavy lifting here, with Ludovic Chabant and Kris Herbert, and a cover by Jacob Webb.  The layout is Nick Brooke, fresh from his A Rough Guide to Glamour and looking at the terrific work the team does here makes me question the wisdom of going my books alone.  Sandheart is an example of how it is getting harder to tell the Compendium and the Chaosium books apart.  It looks professional, the art (and there is a ton of it) is engaging.  It simply looks great.

The book winds down with Brooke's Sun County Backgrounds, here replacing the parental and grandparental backgrounds in RuneQuest: Roleplaying in Glorantha.  This helps make Sandheart an even more useful tool to anyone wanting to run an RQG game in Sun County.

With a foreward by Michael O'Brien, who brought Sun County to us back in 1990, Sandheart marks another step forward not only in the development of the Jonstown Compendium but in the entire Gloranthan Renaissance.  MOB writes of his frustration, back then, of RQ3 doing reprints and not new material.  On the opposite side of the planet, a younger version of me shared that frustration.  What we have now is an embarrassment of riches, with better and better Gloranthan material coming at us every day.  Sandheart is a worthy successor to Sun County, and it looks to be just the beginning.  Thoughtful, exciting, challenging, it is essentially what you want your fantasy gaming to be.  And if you learn something about yourself in the process, even better. 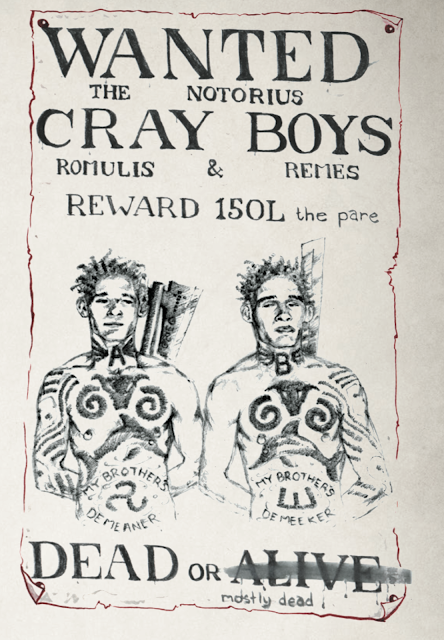 Posted by Andrew Logan Montgomery at 5:29 AM