BACK IN 1990 a coalition of alien realities invaded Earth.  The territories seized by these invaders were altered, so that reality worked there like their home universes, rather than ours.  By converting our world to something more like theirs, they drained the planet's "Possibility energy," the very stuff that makes growth and change happen.  Their goal was to eventually drain the entire planet dry.

But reality forms its own antibodies.  Rare individuals were gifted with the ability to manipulate Possibility energy, and to resist the transformative effects of the alien realms.  Called "Storm Knights" they fought back against the invasion and eventually ended it.  These battles were called "the Possibility Wars," and the roleplaying game that portrayed them was called Torg.

Now, 27 years later, it is all happening again on a different, parallel Earth.  This isn't Torg Second Edition.  It's another Earth, another Possibility Wars, and Torg Eternity is not at all the same game.  If you are looking for a new edition of Torg, this isn't it.

This isn't necessarily a bad thing, and we've seen it before.  Trail of Cthulhu is not Call of Cthulhu; Heroquest is not Runequest (or 13th Age Glorantha for that matter).  These are very different systems that just happen to share settings.  Torg and Torg Eternity occupy the same multiverse--indeed, there is some suggestion that at least one refugee from the Torg parallel Earth has ended up in this one--but they don't have the same feel and they are not interested in the same things. 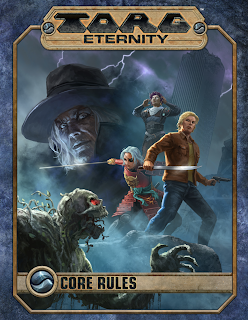 In Torg Eternity, the basic premise is the same.  Seven alien realities have invaded the Earth to rob it of its Possibility energy.  Each of these realities is governed by a High Lord, an individual bound to his or her own "Darkness Device," ancient engines that allow you to bend reality to your will while vampirizing that same reality.  Each High Lord, in their greedy little hearts, dreams of becoming the "Torg," a High Lord who drains enough Possibility energy to become one with his or her Darkness Device and ascend into a kind of dark godhood.

The problem is that like in Highlander, "there can be only one."  Only one High Lord will get to be the Torg.  Their uneasy alliance is masterminded by the most ancient of their number, the nameless "Gaunt Man" who has already drained countless worlds and now has his eyes set on Earth.  Unusually rich in Possibility energy, draining Earth is sure to make him the Torg.  Yet because Earth is so rich in Possibility energy, Earth's reality fights back harder against invasion.  This requires a coordinated attack by multiple High Lords and realities.

The Gaunt Man's own reality is Orrorsh, a realm of Victorian, gothic horror.  Seizing the Indian subcontinent, he turns back the clocks there to the late 19th century and makes it a land of dark magics and fear.  Across the globe in North America, huge regions have been converted into a prehistoric, "lost world" reality of savagery and shamanism.  Northern Europe has been transformed into Asyle, a high fantasy medieval reality.  France and Spain have been claimed by the Cyberpapcy, a futuristic cyberpunk reality where the corrupt Avignon Papacy trumped over the one in Rome and now leads an Inquisition-style theocracy.  Russia has been carved up by a post-apocalyptic reality dominated by Nietzschean demons.  Much of Africa has been converted into a 1930s, pulp comic realm that is a cross between Casablanca, The Shadow, and Raiders of the Lost Ark.  And in East Asia, a realm of espionage, conspiracy, and Resident Evil type horror has taken hold under the auspices of the shadowy Kanawa Corporation. 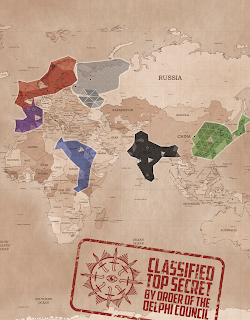 People caught up in these reality invasions were stripped of their Possibility energy and converted into residents of that realm.  People trapped in the prehistoric North American Living Lands, for example, were turned into stone age tribesmen.  Each reality has its own Axioms--Magic, Social, Spirit, and Tech--that regulate what is possible.  Bring your smartphone into the African 1930s Nile Empire and it will simply start working...or be converted into a clunky phone from that period.

Of course not everyone caught in these invasions was converted.  Reality fights back, and some rare individuals--namely the player characters--are gifted with the ability to resist the conversion powers of the realms and to impose their own will (to an extent) on reality.  Called Storm Knights, these characters can go dinosaur hunting in the Living Lands without being changed into cavemen.  They can also make their guns work there.  This risks creating contradictions, however, and can even lead to disconnection from your own reality.  The Storm Knights are recruited by a global agency called the Delphi Council, whose sole purpose is to coordinated the remaining forces of Earth to repel the invaders.

Aside from a few minor tweaks--moving Orrorsh to India or adding a mutating zombie virus to the high tech espionage reality in the Far East--Torg and Torg Eternity are largely on the same page.  The biggest change, really, is "Core Earth," the 21st century reality being invaded.  Unlike the Core Earth in Torg, Eternity's Earth is already a cinematic mirror of our own, where action films like Die Hard or The Fast and the Furious could actually happen.  In addition, because they come from a world so rich in Possibility energy, Core Earth characters are actually better at bending reality and resisting the power of the invading realms.

But for all that they share, Torg and Torg Eternity are very different.

Torg was built around three key elements.  The first was a deck of cards that regulated the flow of combat, triggered special effects, and gave the player characters special tricks and stunts to perform.  The second was an innovative system of values and measurements, inspired by author Greg Gordon's previous work on DC Heroes.  This system meant that all the values in the game, like player character attributes or difficulty numbers, corresponded to an amount of weight, distance, time, or speed.  The third element, and the critical one in a game that is about alternate realities, was the concept of "World Laws."  Basically, when your characters entered different realms, the rules of the game changed.  Sessions played differently.  Fighting a zombie in the high fantasy reality of Asyle was very different than encountering a zombie in the gothic horror realm of Orrorsh.  In Asyle, the zombie was just another monster; in Asyle, the zombie would have a fear rating that until overcome crippled your characters as they fought it.  To overcome that rating, you might be forced to investigate it, gaining bonuses for the final confrontation.  Each realm had rules like this, changing the way the game played.

Torg Eternity is really only interested in the card deck, which--though it is divided into two decks, one for regulating combat and one for player character stunts--still works the same.   Values and measures are no longer the heart of the game, but presented as a sort of optional afterthought.  World laws are still present, but work differently.  In many cases their effects have been shifted to cards that players can play in exchange for a reward of Possibility points (think hero points).  The effect is that each realm looks different, but pretty much works and feels the same.

The argument for this is the same one White Wolf made when it rebooted the World of Darkness line.  The original Vampire, Werewolf, Mage, et al occupied the same setting but had too many differences, too many individual rules.  Torg Eternity is governed by a more universal, seamless system, intended to ease play and make things more balanced.  It plays faster and more smoothly.  There are fewer charts and tables to consult and a lot less math.  Things that used to work very differently from each other, such as cyberware and martial arts, are now all handled by the same system and taken as Perks.  Eternity is easier to run and easier to play.

Given the choice, I will probably continue to play Torg.  Aside from the concept and setting, I am not sure what exactly makes Eternity different from Savage Worlds or the Cypher System.  It is, essentially, a universal rules system now which handles different genres pretty much the same way.  This is immensely disappointing, because the original game went to great lengths to make each genre different.  On the other hand, I don't think this opposite approach will make any difference to new players just coming to the game, who will enjoy it as a fast-paced action romp through multiple invading dimensions.  It's a good game.

I'm just not convinced it is a better game.