THE GLORANTHA SOURCEBOOK: A REVIEW

The Glorantha Sourcebook reviewed here is a lavishly illustrated 226-page pdf.  Released alongside the triumphant new Gloranthan RPG, 13th Age Glorantha, the Sourcebook is system agnostic, and would be a valuable tool for Runequest or Heroquest campaigns.  Less comprehensive than 2014's Guide to Glorantha, the Sourcebook is a much better introduction to the setting, concentrating just on those aspects which make Glorantha so beloved.  Drawing on long out-of-print sources, and including new materials, this belongs in the collection of new Glorantha fans and old timers alike. 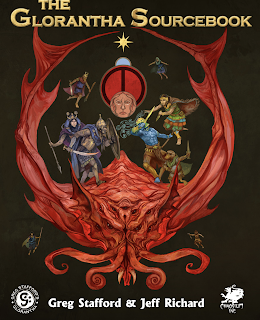 AFTER FIFTY YEARS of board games, RPGs, comics, computer strategy games, essays, short fiction, and long fiction, Glorantha is (as the introduction to The Glorantha Sourcebook tells us) "the best defined gaming setting there is." And yet, despite all of the ink spilled on it, Glorantha remains difficult to explain. "More" is not always "better." Sometimes detail distracts from what is essential.


This is because fantasy worlds aren't really about the details. They are more than just maps, hard to pronounce place names, and invented histories. At the core, a fantasy world is defined by its world view. Middle-earth, for example, isn't dragons and elves and dwarves; Faerûn has all those, as does Tamriel, Krynn, and Thedas. What gives Middle-earth its character and identity is its Catholicism. It is the unfolding divine plan of a Creator, in which the Fall and Redemption are major themes. Without this core, its just another place with halflings.

While the two-volume, 800+ page Guide to Glorantha belongs on every diehard fan's bookshelf, The Glorantha Sourcebook is entirely about explaining the world view of the setting.  Only a quarter of the Guide's length, it's virtue is this focus. It shines a spotlight on what exactly makes Glorantha "Glorantha." "...this book is not a gazetteer or an encyclopedia," the Sourcebook tells us, "...(t)he book is more mythological than materialist."  And right there, ladies and gentlemen, is the world view.  Right there is what Glorantha is. 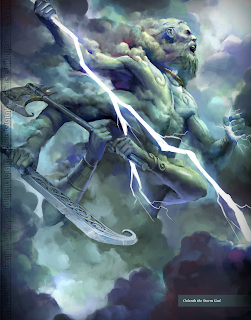 Today, we use the word "myth" as a synonym for "a lie."  It's dismissive, it indicates something that is false.  This is pretty much the opposite of how traditional societies understood the term.  Myths--passed down from generation to generation--were shadows of a higher reality.  They were revelations from the powers that create and sustain the universe.  These primordial forces were beyond human understanding or explanation; the only way to know them was to experience them directly.  A myth was not an "explanation," it was a "journey."  Because it came to us from the higher world, it could be followed back there.  No myth was the whole truth, but every myth pointed the way to truth.

While lots of fantasy worlds have gods, myths are at the center of Gloranthan gaming.  The "higher reality" discussed above is called the God Time in Glorantha; the "primordial forces" there are the Runes.  Glorantha magic is "the interaction of mortals existing within Time with the timeless and eternal powers of the God Time."  Adventurers become heroes by following the myths.  It is no accident that the first two Gloranthan RPGs--Runequest and Heroquest--bore those names.  Following myths to access the Runes and become Heroes is what Gloranthan characters do. 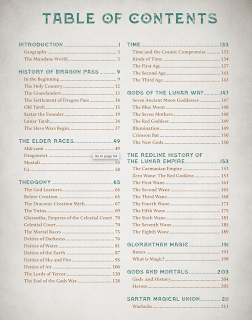 Of The Glorantha Sourcebook's 226 pages, more than half is given to mythology.  "Theogony," the longest chapter, is a God Learner* inspired overview of Glorantha's creation myths and her great pantheons (Darkness, Water, Earth, Fire and Sky, and Air).  The Gods War is detailed, a mythic conflict that cracked the world and allowed Chaos--the power of corruption and entropy--to enter.  Long-time fans will of course know all of these stories, but their retellings here, complete with beautiful illustrations showing the gods and their relations with one another, are extensive and deep.  For my money this was the best overview of Gloranthan mythology we have seen.

Alongside this in-depth look at Gloranthan myth, an entire separate chapter is given to describe just a single pantheon, the "Gods of the Lunar Way."  A dead goddess reborn inside of Time, it makes sense to single the Red Goddess out.  Unlike the other deities, she lived among mortals in the Mundane World, her presence changing the entire cosmic order.  The Empire she left behind (detailed in the following chapter) is one of the most important political structures at the time and place the sourcebook focuses on. 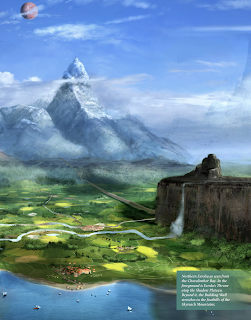 When and where exactly is that?  The Sourcebook is set around 1627 ST in the Third Age of the world.  This is the Hero Wars, when the rebellious, freedom-loving Orlanthi barbarians are throwing off the yoke of the Lunar imperium.  Argrath, the exiled Prince of Sartar has returned to his kingdom, liberating it.  Because the Hero Wars are the focus of this work, the Sourcebook does not go into great detail on the rest of the world.  Glorantha's geography and cosmology is discussed, but the only regions given great detail are Dragon Pass (where the Hero Wars ignite), neighboring Prax, and the Lunar Empire.  If you are looking to run a campaign in Pamaltela, this is not the resource for you.

It's hard to argue with this design choice.  All three Glorantha RPGs made pretty much the same decision, focusing on Dragon Pass.  Again, focus allows the Sourcebook to lavish attention on this region, not in details like demographics and exports, but on the cultures, myths, and history which make Dragon Pass so mesmerizing.  For long time players, moving the date forward into Argrath's return follows the trajectory set in recent Heroquest materials, and opens up new features to explore, such as the entire chapter on the "Sartar Magical Union." 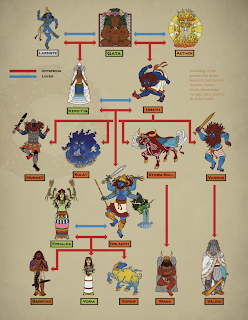 Like the myths that form the core of Glorantha, the Sourcebook is not an explanation, it is a journey.  There is just enough here for newcomers to understand Glorantha and for long time fans to (re)discover little treasures and fascinating details.  This isn't a campaign book, or a setting book in the traditional sense.  It doesn't tell you the population of villages or the names of local rulers.  It is a collection of histories and myths for you to use in discovering your Glorantha.  It's vividly told, beautifully illustrated, and inspirational.  Do not expect crunch, or the extensive details and maps from the Guide to Glorantha.  This is a book (when Chaosium finally prints it) you will want on the shelf next to the Guide. 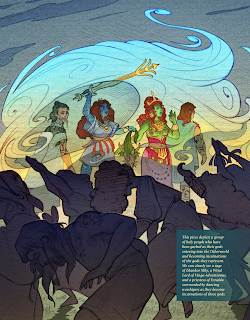 * The God Learners, dear reader, are a cautionary tale.  A Second Age seafaring empire, the God Learners believed that myths were things they could rewrite, retell, and synthesize at will.  To them, human rationality--reason--was superior to myth.  They thought the universe could be studied and understood.  In the end, it destroyed them.