THEY CAME FROM BEYOND THE GRAVE: A REVIEW 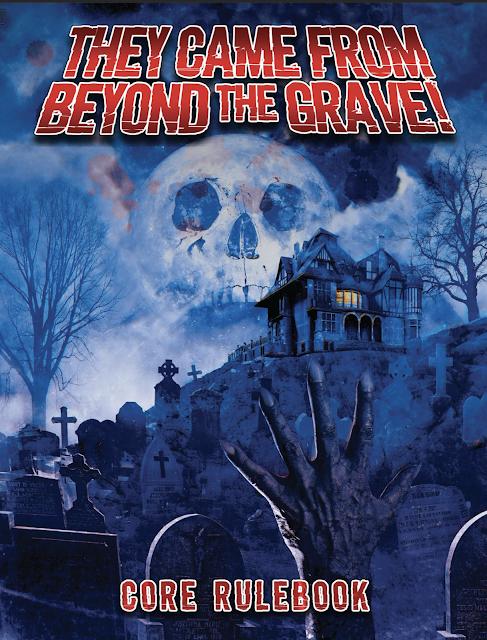 HORROR HAS BEEN A CONSTANT since the earliest days of cinema. 1896 saw the three-minute long Le Manoir du Diable, created by pioneer filmmaker Georges Méliès. Just two years later, in Japan, Ejiro Hatta filmed Shinin no Shosei, about a corpse that returns to life. Lon Chaney's silent Phantom of the Opera was a sensation that put Universal Studios on the map. This in turn led to two decades of classic Universal horror pictures, with competitors like RKO producing their own share of surprising classics, including Val Lewton's superb Cat People, I Walked With a Zombie, and The Seventh Victim. The war brought a lull to this, and in the shadow of Hiroshima and Nagasaki the monsters became atomic. Fueled by the Cold War, weird cinema turned to alien invasions and mad science. But just when you thought the supernatural monsters were down, they struck back with a surprising revenge.

Hammer Films started with post-War science fiction, their Quartermass films and X the Unknown making a name for themselves. But it was their decision to cover the same gothic ground the Universal classics first marked out, this time in glorious color and with buckets of blood, that summoned the horror picture back from the abyss. 1956 saw The Curse of Frankenstein and '58 saw The Horror of Dracula, and with these there was no longer any returning the genie to the bottle. Pandora's Box was open, and the 60s and 70s saw a superb and terrifying flowering of the horror genre. Not just Hammer, but AIP's terrific Roger Corman Poe Cycle and Italian giallo made these decades a macabre golden age of terror.

And all this to try and explain Onyx Path Publishing's They Came from Beyond the Grave!

They Came From Beyond the Grave! is in the publisher's own words "a dramatic, hammy, and horrifying tabletop roleplaying game encompassing the shock, terror, eroticism, and humor of 1970s horror." It is, as they say, "a mix of serious threat, unmitigated ham, and nonsensical farce." If you know horror from that period, it was a cocktail of chills and camp that Grave! does a terrific job of emulating. It is, to put it mildly, an odd duck of a game. 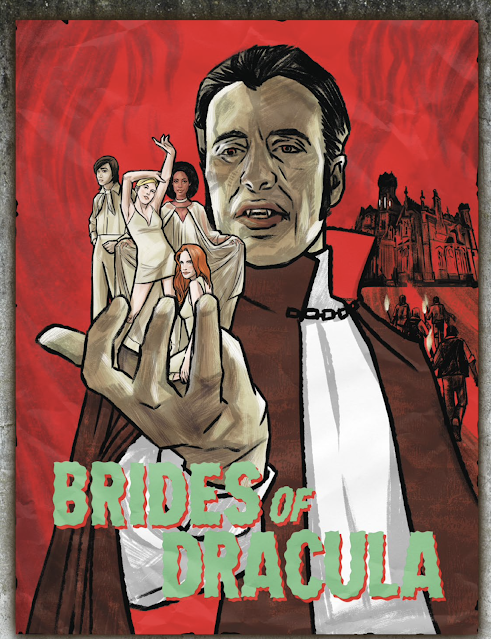 The product I am looking at is a 311-page PDF, 40-odd pages of which are Trope and Quip cards meant to be printed out for play. The engine is the Storypath System, an evolution of the Storytelling System popularized in the 1990s by White Wolf. The book is lavish, full color, and incredibly evocative of the source material.

Characters come in two parallel forms...1970s characters and their late 19th century counterparts. Essentially this is because so many horror films of that period were gothics set a century before. There are various ways you could relate these two characters. One could be an ancestor of the other (perhaps even a reincarnation, a la Dark Shadows), or simply just a 19th century doppelganger. The characters are characters in movies, after all. This picture could be set in the 70s and the next in the 1800s. Depending on play style, a group might weave the lives of these two sets of characters together in a single story, or not.

Players will select from archetypes that embody the stock characters of films like these. The Dupe is Joe or Jane Average, a normal person caught up in terrors beyond their ken. The Hunter is a monster hunter. Maybe they bag werewolves, maybe fearless vampire hunting is their thing. The Mystic dabbles in the supernatural, the Professor is the expert, and the Raconteur is the eccentric detective. Each comes with special tricks, called trademarks and tropes, that define them. This is where the cards come in. Tropes trigger some sort of stylish and characteristic benefit. The Hunter, for example, can use "Listen Here, Kid" and inspire a young supporting character to do what you tell them. The Dupe might use "I Didn't Sign Up For This" which allows them to escape a dangerous scene. Archetypes also get a number of Quip cards, one-liners they can deliver in play at an appropriate time and earn a temporary benefit. 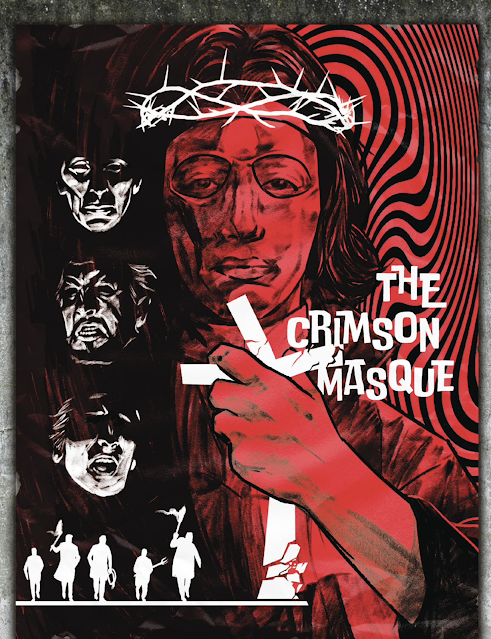 The game also has a system of "rewrites" that allow players--not their characters--to step out and direct a scene. These are the Cinematic Powers that make the game so distinctive. Spend 3 rewrites for a Deus Ex Machina, a stroke of luck that saves your party from certain doom. 2 rewrites can buy you a Musical Montage in which you prepare for something. I am particularly fond of Summon the Stuntman, in which if you are not up for a physical confrontation or athletic challenge replaces you with a stunt double who is. Rewrites are a limited resource, and you won't be falling back on these cinematic saves all the time, but they do a terrific job of adding color and emulating the genre.

This is, of course, a game of supernatural horror and it comes fully loaded with all the monsters you might expect. Dracula is in these pages, and the Brides of Dracula. There are Ghosts and Mummies and Possessed Dolls and THE DEVIL HIMSELF (caps not mine, it is how he is referred to the entire text). Monsters all have special rules that apply to them to make them unique. They also come with both 197os and Victorian modes. All together there are around 30 of these beasties, and all the ones you would expect. 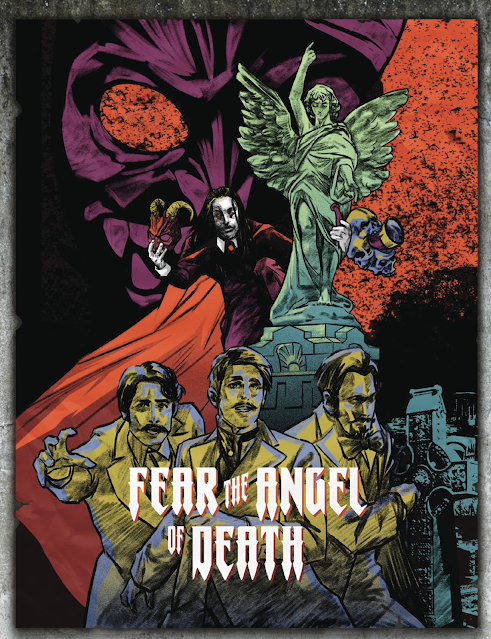 The Director's (GM's) chapter has terrific advice on the genre and running the game. There are tons of "sets," stock locations featured in films like these for both eras. There are also two scenarios that are terrific, ghoulish fun.

The result is a game that manages to be much more than the sum of its weird little parts. They Came From Beyond The Grave! does not pretend to be something for everyone. It has a very specific focus and style and it nails it. Reading it, I couldn't help but think of those little Peter Vincent scenes 1985's Fright Night used to send up 70s horror. If you like Hammer, Dark Shadows, Amicus or AIP, this is the game for you. A slick piece of design that is a loving and loyal tribute to the films that inspired it. 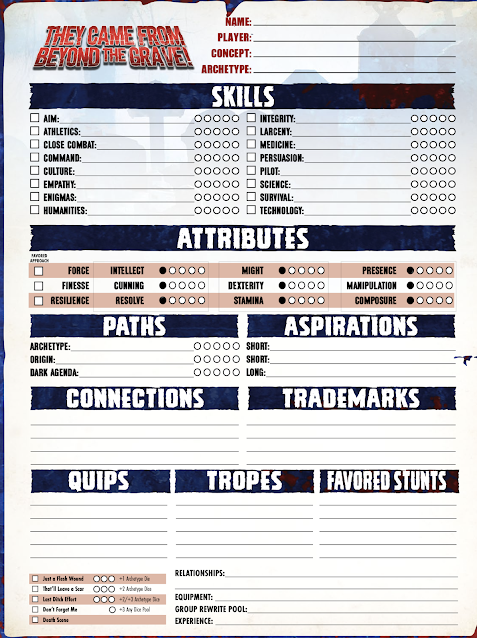