EXCAVATING GLORANTHA: A LOOK AT THE RUNEQUEST WEAPONS & EQUIPMENT GUIDE

I have a bone to pick with the brand-new RuneQuest Weapons & Equipment guide. Its title. 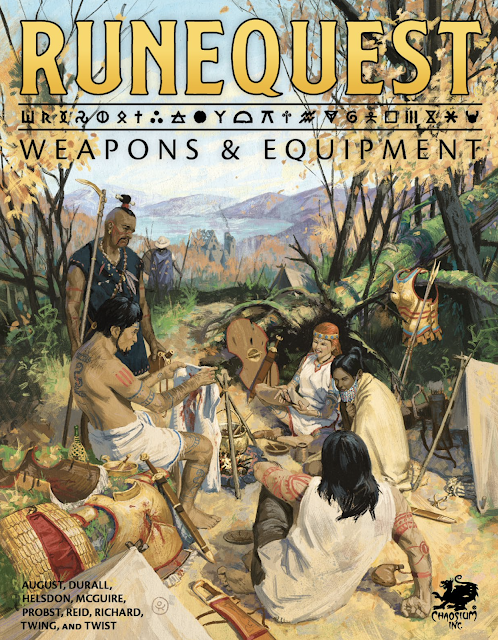 Entering university, I knew I wanted to study the ancient world. What I didn't know was how I wanted to go about that. Eventually I would settle down with philology, peering into bygone eras through the languages and texts they left behind. Before that, however, I played the field. I had a fling with anthropology, but there was no chemistry there. History and I hooked up several times without commitment. My first boyhood crush, however, was on archaeology. How could it not have been? I was ten when Raiders of the Lost Ark hit the screens. While all my friends were hot for Han Solo, I only had eyes for Indy. My first Call of Cthulhu character was a much more bookish version of him. Once I seriously started taking courses, I soon realized that archaeology was going to involve a lot more time studying sediment layers than raiding tombs. We broke up, but you never really forget your first.

One thing that stuck with me from that relationship was a respect for material culture. Sure, language is fundamental to how we act and think--it's the operating system of consciousness--and religion appears to be the thing that first divided our ancestors from other primates, but what a people wore, what they ate, what games they played and tools they used and materials they built from...these things are definitive. Visceral. You can read about the ancient Greeks, but a day spent at the Ure Museum of Greek Archaeology staring at the dishes they ate off of and the cups they drank from actually transports you to their world.

And that is why I have a bone to pick with this title. Weapons & Equipment sounds like a laundry list for player character adventurers. This book is so much more. This book is RuneQuest: The Material Culture of Dragon Pass.

At present the book is a 130-page PDF. As with other Chaosium titles, buy it now and you will get a voucher offsetting the price of the physical copy--the material culture copy--when it arrives. The writing team rounds up the usual suspects; Richard August, Jason Durall, Martin Helsdon, Erin McGuire, Diana Probst, Jude Reid, Jeff Richard, Jared Twing, and Dom Twist. The art team, under the direction of Helsdon, Durall, Kalin Kadiev, Jaye Kovach, and Aron Tarbuck is too extensive to name here but is filled with many of the people who have been breathing life into the current RuneQuest line. Notable is Ossi Heikkala, who provides the cover art (fresh from having done so for the Starter Set). We are coming back to Ossi in a moment.

So what exactly are we getting here?

After a brief introduction and a helpful chart of weights and measures, we dive into "The Market." This chapter talks about trade in Glorantha, currencies, and economics. What goods might be available, selling loot, and repairing and maintaining material goods are all found here.

"A Bronze Age World" follows next, though the title might be a tad misleading. Glorantha in the Third Age most closely resembles the terrestrial Bronze Age, but the chapter begins with a description of Gloranthan metals (the most detailed we have seen in the new line thus far) that makes it clear we are not really in Kansas, Toto. It then moves quite logically from metals to pottery. While metals were essential for tools and weapons in ancient material cultures, it was pottery that formed the backbone of everyday life. Used to store food, drink, and oil as well as to eat and drink off of, there are reasons museums are crammed full of ancient pottery today. Then we get a discussion of spinning and weaving and--huzzah!--fuels. I suspect the minds of the vast majority of fantasy RPG players just imagine everyone burning wood. Not so, my friends, not so.

And this is where I need to pause and stress what is exciting about this book. Sure, something like The Red Book of Magic might be sexier, but Weapons & Equipment immerses you in Third Age Dragon Pass like absolutely nothing else before. We all want to know about the magic and the cults, and Gloranthan gaming has always done a superb job on the religious aspects. But what about everything else? What would the daily life of a character in Dragon Pass look like? This is the book that tells you.

"Common Goods" comes next, with clothing, jewelry, cosmetics (including tattooing pigments!), tools, musical instruments, and popular toys and games. What will your adventurers do the next time you are sitting around the campfire? Get out your dice and play Enzetsu of course! Then comes the section I found the most exciting...food and drink. As a GM, there is a tremendous different between saying "okay you eat" and "you are served frybread with spiced minced chicken and einkorn ale." A discussion of herbs and plants is next, with more exotic raw materials soon after. Household goods and trinkets are covered before finally talking about adventuring gear.

"Beasts" covers both the riding kind and the kind you eat, as well as rules for mobile dwellings and awakened animals.

"Hirelings & Services" is next, a chapter I expect player characters to get a lot of use of. The kinds of hirelings and prices they command are covered, with a very detailed look at mercenaries and how they function. Culturally differences are examined (how the Orlanthi divide spoils versus how Yelm worshippers do), before we move on to hiring laborers, sages and scribes, and crafters. Slavery is discussed, with a useful reminder that the slavery of the ancient world is not that of the American antebellum south, and how to deal with it (or not) in your games. We come round then to tattooing and the types of it practiced in Dragon Pass, as well as magical services and inns. Funerary rites is next and makes for a fascinating read.

"Weapons" and "Armor" come next and I will gloss over these chapters. They are comprehensive, and beautifully illustrated, but as RPG players we all know what to find here.

We get to "Travel," a terrific little chapter that details the various methods of getting around Third Age Glorantha. Guides, chariots, and ocean travel are all here. But I did warn you earlier we would be getting back to Ossi Heikkala's art, and I can't leave this chapter without pointing out a piece that exemplifies this book and what it is trying to achieve.

On page 91 is a full-page plate of a Vingan warrior asking for directions. To be honest, I first saw it a year or so ago where it struck me and has stayed with me ever since. To me this is the RuneQuest illustration. All the grit, all the realia of the game and the world is right there. Not a Red Sonja in a chainmail bikini, this battle-scarred Vingan is dusty, dirty, and has a look of weary resolve. The goods slung off the spear, the little girl cowering behind the farmer, this is what Glorantha looks like. I might have been tempted to make this image the cover of the book, as it immerses you in the setting as intensely as the text does. 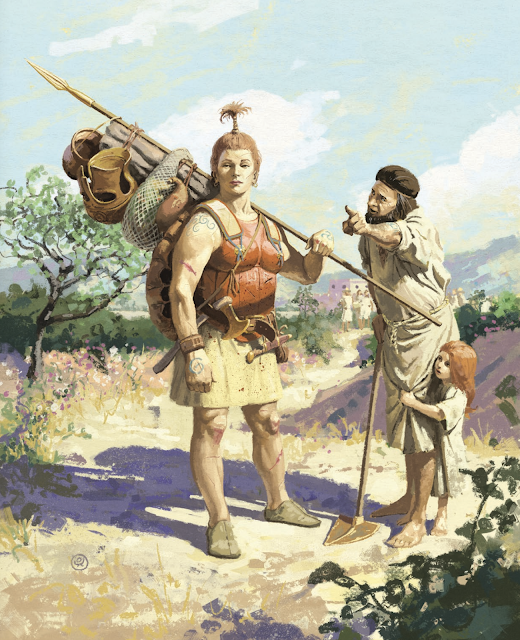 The next chapter is "Dwellings," with discussions not only of the kinds of homes and buildings you find in Glorantha, but also building fortifications, acquiring land, managing property, building settlements, and farming. This is followed by "Training," another chapter player characters will love, as it goes into detail on the different kinds of training available.

We end on "Exotic Items," mostly magical, which are the kinds of treasures PCs are always hungry for.

Look, it is easy to call anyone of these titles "indispensable." The Red Book of Magic is the "indispensable" guide to spirit and Rune magic, the Glorantha Bestiary is the "indispensable" book of Gloranthan monsters, beasts, and Elder Races. But Weapons & Equipment is different. GMs and players should both want to have this, because even just reading random sections of it, Glorantha springs to life. It is like going from 2 to 3D. As gamers we forget, dazzled by gods and magic and monsters, that the best fantasy settings are living, breathing worlds. This journey into material culture drives that point home. For all of her wonders, her strangeness, Glorantha is an incredibly defined and real setting. Weapons & Equipment underscores this, and I suspect will change the way you think and feel about the game.