SIX SEASONS IN SARTAR, AN UPDATE, AND WHAT ELSE IS IN THE WORKS

Six Seasons In Sartar is still in DriveThruRPG's top ten "Bestselling Titles" three weeks after release, something I certainly never expected from a modest community content offering.  I am indebted to the folks at Chaosium, as well as the Glorantha fan community, for this.  The reviews have been terrific, and because of all of this we are working hard to prepare the book for a print on demand offering (something we never initially expected to do).  Stay tuned for news on that. 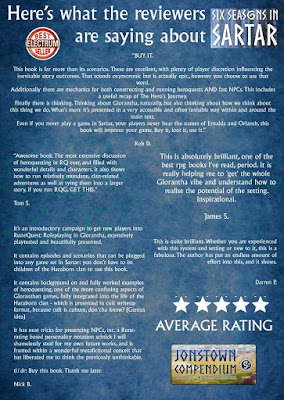 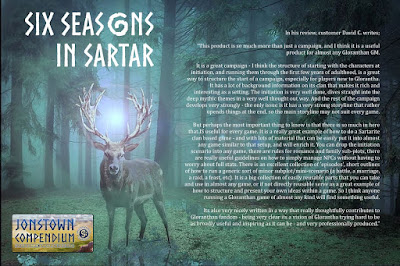 And here as well.

With this said, I'd like to let all of you know what you can expect from us next. 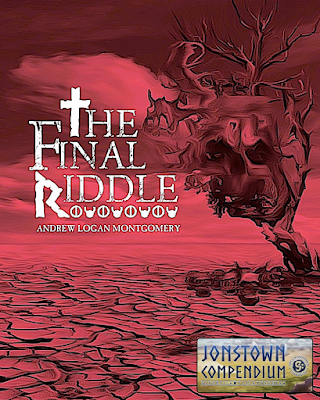 As Pavis struggles to recover from the Great Winter, its streets thronged with the destitute and the hungry, a Dara Happan aristocrat arrives from the ancient Pelorian city of Alkoth.

For two dozen desperate guards, bearers, and guides, employment means rescue from starvation.  But everything comes with a price.  Prithverna's path will lead them across the River of Cradles into the desolation of the Wastelands.  Her purpose a mystery, they stray far from caravan trails and nomad grazing lands into uncharted horror and madness.  The restless dead, hungry spirits, and Chaos monstrosities haunt them every step of the way, but all this pales before what awaits them at the end... 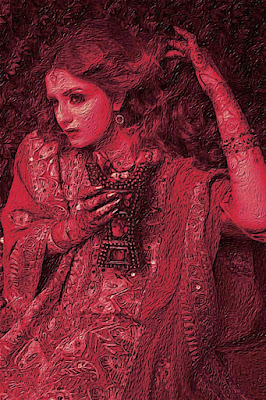 Inspired by Armaj of Glamour's infamous pillow book, The Final Riddle is expected to be about a hundred pages.  Like Six Seasons in Sartar, it comes annotated with excerpts from scholarly works and lectures detailing aspects of Seventh Wane history, Lunar religion, and life amongst the nomad peoples of Prax.  Also included between the covers you will find;

5 complete scenarios set in the Wastelands beyond Prax, useable together as a single campaign of suspense and horror, or separately in your own Gloranthan sagas.

An introductory essay on author Lady Armaj, Lunar pillow books, and how The Final Riddle led to her downfall and death.

A chapter on Illumination in Glorantha, discussing the differences between Nysalorean Illumination, Lunar Sevening, and Draconic Consciousness.

Streamlined NPC creation rules that focus on roleplaying and making the characters memorable.

A dozen Prax and Wasteland specific "episodes," mini-scenearios and side quests you can use to expand your campaign or drop into any ongoing Gloranthan game.

We hope to offer the book in both PDF and POD formats.

SIX SEASONS IN SARTAR: THE COMPANY OF THE DRAGON 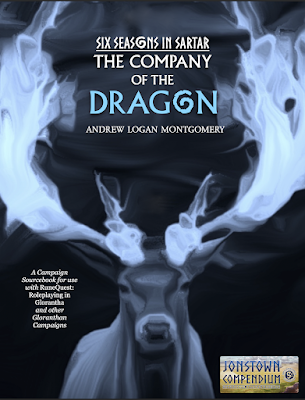 Once, you had a home.  You had a family and a people.  You belonged, and something belonged to you.  Then, the  treachery of your own king and the servants of the Red Moon goddess took everything away from you.  You watched the people you loved die and the life you knew burn.

Now, all that's left is vengeance.

Playable as a direct sequel to Six Seasons in Sartar--in which your characters are now "the Company of the Dragon," also known as "Kallyr's Chosen"--or as its own separate campaign where you start off as a band of outlaws and rebels waging guerrilla war against the Lunar Occupation, The Company of the Dragon is the story of a conquered people and the lengths they will go to for freedom.  Members of the Sartarite rebellion, from their hidden encampments the characters strike at the Occupation every chance they get.  But the "deaths" of their god and goddess at the hands of the Lunars have brought endless winter and starvation.  If something doesn't change soon, there will be nothing and no one left for them to liberate.

Planned to be even longer than Six Seasons, at about 160 to 180 pages, The Company of the Dragon will include;

5 complete scenarios taking place over as many years, including a daring raid to rescue prisoners condemned to feed the Crimson Bat, the Battle of Auroch Hills, and a terrifying mission into a condemned dragonewt citadel in order to help Kallyr of Kheldon drive out the Lunar Empire once and for all.

A extensive look at Initiation in its various forms and degrees, including initiation into cults or war bands, Rune Lord status, or the Rune Priesthood.

An essay on Draconic Consciousness, the dragonewts, and the mysteries of the Empire of Wyrm's Friends.

Two dozen "episodes," mini-scenarios and side quests centered around life as a rebel.  These include raiding caravans, espionage missions, attacking supply lines, taking and liberating hostages, and diplomatic assignments to gain support for your cause.  While tailored for this campaign, they could easily be adapted to any other Gloranthan saga, especially those focused on rebellion and banditry.

Like Six Seasons in Sartar, The Company of the Dragon is designed with flexibility and adaptability in mind, so that much of it can be reused in other RuneQuest or HeroQuest/Questworld campaigns.

We intend to have the book ready before Christmas, in both PDF and print on demand forms.

Posted by Andrew Logan Montgomery at 1:22 AM