THE SMOKING RUIN & OTHER STORIES: A REVIEW (okay not a review so much as a love letter because I couldn't find a damn thing wrong with it)

THERE IS A LINE on the dust jacket of the Guide to Glorantha that reads; "Glorantha is the technicolor cure for bland, pseudo-medieval generic fantasy."  Normally when you read something like this, you can be forgiven for thinking it is self-aggrandizing, pretentious crap.  Not in this case.  If you have any doubts, all you need do is look at exhibit A, The Smoking Ruin & Other Stories.  Seriously.  You can open to any random page and find proof that--yes Toto--you aren't in Thedas, or Middle-earth, or Faerûn any more. 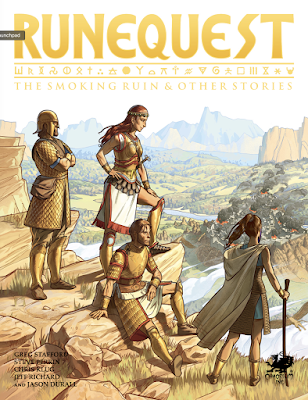 Written by Christopher Klug, Steve Perrin, Jeff Richard, Greg Stafford, and Jason Durall, The Smoking Ruin & Other Stories (hereafter just TSR) is a collection of adventures for Chaosium's RuneQuest: Roleplaying in Glorantha. Set in the South Wilds of Dragon Pass, the book details that region and contains three--no, I am not going to use the word "scenarios" here, they deserve better than that--three fables which unfold there. We are not talking about stories where you sit in a tavern and overhear dwarves talking about a dungeon filled with orcs and treasure here. We are talking about stories in which your priestess of the Earth Mother sends you to recover artifacts in a ruin where the cursed bodies of massacred trolls have been damned to burn for centuries, their spirits trapped agonizingly within. We are talking about stories in which you find yourself in a hidden valley besieged by mercenary Beast Men, a valley whose ancient guardian has gone missing and needs you to find him. We are talking about about Elves--oh no, my friend, not those Elves...I mean a race of animated dryads with wood for bones and sap for blood--attempting to plant a sacred tree that will bless and spawn a new Elf Wood. In short, we are talking about stories that really could only happen on a flat world under a sky dome, a Bronze Age world that eschews physics for mythology. These are stories that could only happen in Greg Stafford's Glorantha. Coming in at about 192 pages TSR is a bold attempt to remind you why RuneQuest is a gaming legend.  The South Wilds, the Lost Valley, the Wild Temple are all settings as exotic as they come, settings in which the mountains can casually be described as "the backbone of the dragon Sh’harkazeel, covered in earth and vegetation."  Here the Pure Horse People graze their herds and defend them against dinosaurs and smilodons.  Here the numerous types of Beast Men--centaurs, satyrs, and far stranger--gather at a spiraling network of megalithic standing stones to worship the Mother of Nature.  Here there is a valley shrouded from the rest of the world.  The locations and their denizens are all richly detailed with full statistics in grand Chaosium style (the company has several decades of reviews praising them for meticulous craftsmanship and hardly needs me to join that chorus).  What I will say instead is that Chaosium products have never looked as stunning as they have in the last couple of years, and that Olivier Sanfilippo has my blessing to continue doing Gloranthan maps for the rest of eternity.  The talents of Dimitrina Angelska, Antonia Doncheva, Jon Hodgson, Jennifer Lange, Pat Loboyko, Eli Maffei, Magdalena Mieszczak, Sara Otterstätter, Scott Purdy, Corey Trego-Erdner, and Chris Waller make this a beautiful book to look at as well as play. 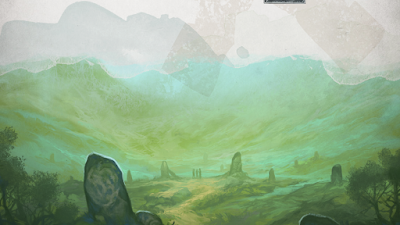 On the subject of shout-outs to contributors, I would be failing miserably at my job if I didn't single out industry legend Christopher Klug.  Author of The Smoking Ruin, the longest and central fable in this collection, Klug really should need no introduction, but for my younger audience, Christopher Klug is the man responsible (amidst a great many other achievements) for 1983's James Bond 007 RPG, a game design so brilliant you can pull it off your shelf today and play it and think it was cutting edge.  If you have ever played an RPG with the concept of hero points in it, write a thank you letter to Klug right now. 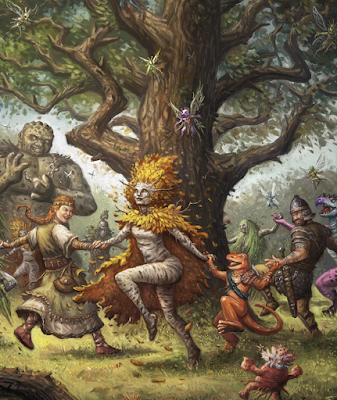 Now look, gentle reader, I know what you are thinking; "is this a review or a love letter?"  But the fact remains that I struggled long and hard to come up with flaws--spelling mistakes, typos, botched index references, anything--so that I didn't come off as a lovesick school boy, but alas, here we are.  The worst I can say of TSR is that if you like your fantasy medieval, with knights and goblins and trap doors, ignore the book and go play Pathfinder.