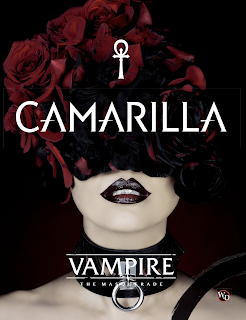 IN THE INITIAL DRAFT of this review, I had written an entirely different introduction to it.  I had talked about storytelling, and how being a storytelling game had always distinguished Vampire: The Masquerade from roleplaying games.  I had written about how the new edition seemed committed to refocusing on the game's storytelling roots, and how the Camarilla sourcebook was a clear indication of that.  That was what I had planned to lead with.

Prior to revising the first draft, however, I read a message from publisher White Wolf.  An entire chapter of the book--in the wake of an online petition and some pushback from the community--was being removed from it.  And in one stroke, the aspect I thought had been the defining characteristic of the product changed.  The headline of Camarilla is no longer storytelling.  It is censorship.

We tend to think of censorship as Big Brother, as government stepping in and policing speech.  Yet the dictionary tells us it is;

...the suppression of speech, public communication, or other information, on the basis that such material is considered objectionable, harmful, sensitive, or "inconvenient" as determined by a government or private institution...

This book contained a chapter that was offensive to people, and so it was removed.  In the same way that cartoons or slurs against the Prophet Mohammad are removed in Saudi Arabia or Pakistan, in the same way that the Texas school board is currently trying to remove mentions of Hillary Clinton or slavery from history textbooks.  There is no real difference here.  The decision to remove the chapter rests in the naked fact that some people didn't like it, and therefore decided the rest of us should not be able to read it.

The chapter in question set up the premise that the horrors in Chechnya are the byproduct of vampiric control of that state.

You might want to read that last sentence again.

Because in a horror storytelling game, in a game that by design sets out to challenge and discomfort you, in a game in which the entire premise is and always has been that vampires are pulling the strings behind the scenes, in a game in which you are playing the part of a serial-killing cannibalistic corpse...this chapter was too offensive to people.  This is the chapter that had to go.

We don't have the stomachs for Vampire anymore.

Camarilla (released alongside its sister book, Anarchs) is hardly a perfect book.  Then again, it doesn't set out to be.  The original Vampire: The Masquerade was revolutionary not just in its subject matter, but in its conscious emphasis on style over substance.  At a time when most games were scrabbling to become the most realistic simulation possible, Vampire went the opposite direction.  It was a game about characters and stories, a point it drove home by exchanging the term roleplaying for storytelling.  Conflict, theme, and mood were the essentials, not combat rules or battle grids.  It was atmospheric and at times pretentiously artistic.  The new V5 line, of which this is the second release, shows a commitment to the exact same principles.  You see it on every page of Camarilla.

Hell, you see it on the cover.

We are not supposed to judge books by their covers, but in this case we can make a safe exception.  What ridiculous nonsense is this?  Why is this vampire obscuring her vision with roses on her head?  How on earth does she keep her lipstick so perfect?  What toothpaste is she using (because those are some splendidly white teeth)?  None of this matters, of course, because we are not looking at reality here, we are looking at an image.  And image, ladies and gentlemen, is the heart of the game.

This cover exemplifies the criticism that the new V5 line looks like a fashion magazine.  But of course it does.  This is not Vampire: The Requiem, the subtitle is Masquerade.  The core conceit of the game is a false front, an image, a fake face you present to the world.  Fashion magazines typify that.  Looking at the cover of Camarilla tells me what the organization this book describes is all about.  The Camarilla is dedicated to the Masquerade.  It is all about protecting the image.

Once inside the cover (which I contend is a stroke of genius), things get a bit dodgier.  The organization of this book is mad.  It begins sensibly with an Introduction to what the Camarilla is and how it has changed, followed by a look at the top of its power structure...all quite logical.  But what might logically follow that--the organization's Mission Statement, its local structure in individual cities, the Clans that comprise it...well, that is all scattered haphazardly throughout the book.  Instead it drops in entire chapters detailing religious beliefs (including a Latin ceremony that generously borrows from The Satanic Bible), the Gehenna War, and the Second Inquisition in the midst of these topics.  There is no real flow here, no rhyme or reason for why chapters are where they are.

Again, I think this was intentional.  Camarilla is not so much a game book as it is a conversation between a Sire (the wickedly charming Victoria Ash) and her Childe.  Chapters begin with letters from Victoria, and the book is meant to be a collection of articles and snippets she has sent her Childe to illuminate and explain aspects of the Camarilla.  No one is going to have Camarilla at their elbow at the game table, flipping through it looking for rules.  No, this is a book you pour a glass of wine for and flip through to absorb the atmosphere.

There are players for whom this approach is uncomfortable, to say the least.  They want straightforward details and statistics.  But Camarilla is not explaining so much as hinting.  The is a World of Darkness, of shadows and mirrors where nothing is ever clear and no question can ever really be answered.  A lot of this book is meant to inspire, to help players get character ideas and storytellers to map out their own version of the Gehenna War.  You will not be getting concrete here, but rather ephemera.

What exactly is in the book?

There is of course a description of the structure and mission of the Camarilla in the 21st century.  Long time players will recognize most of this but there are dramatic changes.  The Camarilla before was inclusive, it saw itself as the governing body for all the Kindred.  No longer.  It is now an elite social club, more like the Mafia than anything else.  You don't get automatic membership.  You need to prove yourself to be let in.  The reason for this is predictably brutal.  With the Second Inquisition in full swing, the Camarilla has circled its wagons.  Let the Anarchs and neonates fend for themselves and give the Inquisition something to shoot at.  The Camarilla now exists to protect its own.

As one aspect of the story the new line is telling, there is an entire chapter dedicated to the Second Inquisition, including discussions of the organizations that comprise it, how it operates, and how to fight back.

Naturally, the book also discusses the Clans that make up the backbone of the Camarilla.  The Ventrue, Toreador, Tremere, Nosferatu, and Malkavians are all familiar to us from the core rulebook.  This book adds a full description of the Banu Haqim, the faction of Assamites that have come over to join the Camarilla.  This is part of the story that Camarilla and V5 want to tell; the Sabbat has abandoned their cities to head to the Middle East, hunting for the Antediluvians to stop them from waking.  The Camarilla Elders, meanwhile, have been compelled by some supernatural call to go fight them.  There is a 20 page chapter in the book discussing this conflict, and hinting that the Gehenna War is not going so well for the Camarilla.

The Sabbat gets a short overview as well, but this is more atmospheric than explanatory (the way, incidentally the first and second editions of Vampire handled the Sabbat in 1991 and 1992).  There is also a discussion of the Anarchs, Caitiff, and Thin-Blooded from the Camarilla perspective, and a look at the Clans Brujah and Gangrel.

The "crunchy bits," aside from some new mechanics for the Banu Haqim, are seven new Camarilla-specific "loresheets," including one for Victoria Ash and the Cult of Mithras.  Introduced in V5, these are an interesting way to tie characters to the developing mythology of the world. The other crunchy bit are rules for Institutional Conflict, giving statistics to corporations, factions, or agencies so that you can play out them fighting each other on a larger, impersonal scale.  Institutions have attributes like Force, Prestige, and Depth, and can take damage just like PCs or SPCs. These are light mechanics, but useful if, for example, you have vampires subvert one government agency to attack and damage another participating in the Second Inquisition, or you wish to pit two corporations at each other's throats.

So, do you need Camarilla to play a V5 chronicle?  No.  Do you need it to run one?  No.  This is not the kind of splat book that White Wolf became infamous for in the late 90s.  I started with the cover, and I end with the cover, because it tells you all you need to know about this book.  Camarilla is all about surfaces and suggestions.  Image.  It teases and hints and tantalizes, but in the end it is all just foreplay.  Personally I like this approach; as a game master I don't want to have choices made for me.  Throw me a few hints and I will decide what they mean in my chronicle.  But if you are looking for concrete details, specifics, or "What Is Really Going On" you will not find it here.  Camarilla is a smooth, sexy, at times deeply disturbing read that fills your head with possibilities.  And if you are like me, that is how you like your Vampire.