THE RUNEQUEST GAMEMASTER SCREEN PACK: A LOOK INSIDE

MORE THAN A SCREEN

A people without the knowledge of their past history, origins and culture is like a tree without roots.

TWO RELATED WORDS come to mind whenever I think of RuneQuest: "cult" and "culture."  Really since the beginning these concepts are what made the game--and its extraordinary setting--unique.  Characters were never defined by something so abstract as a "class" or an "alignment," but rather by what they believed in and where they came from.  Cult and culture not only defined the character, but also the narrative.  Treasure-hunting certainly happened, but most adventures were on behalf of, or in the defense of, a religion or people. 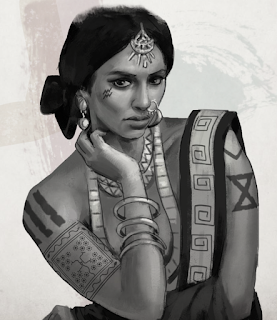 If I have a chief complaint with the new RuneQuest GameMaster Screen Pack, it's that it is a very badly named product.  Yes, there is a gorgeous gamemaster screen in there, 20 pages of handy reference sheets, sumptuous character sheets, tons of maps, and even a calendar (and I will be getting to all of them shortly), but what the team led by Jeff Richard and Greg Stafford have really given us here is a living, breathing culture.  The component they humbly refer to as a "booklet" is in fact a 128-page book detailing the lands and peoples of the Colymar tribe.  It easily could have been sold separately from the "Screen Pack," but Chaosium has never been big on half measures.  Thus the first gamemaster-oriented product in the RuneQuest: Roleplaying in Glorantha game line isn't just a technical tool kit but also a conceptual one. It reminds the prospective GM that RuneQuest sandboxes are not just dungeons on a map, but a history, a people, and a way of life that generates adventures. 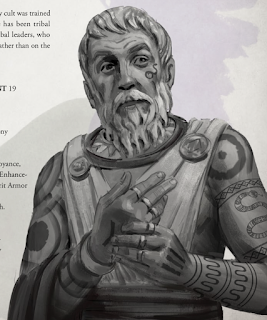 LET'S START WITH THAT "BOOKLET"

To my mind the centerpiece of the entire product, the RuneQuest GameMaster Screen Pack booklet (which mentally I am calling "Lands of the Colymar" or the "Colymar Tribe Book") is in the fine tradition of earlier RQ products like Pavis, Big Rubble, and Griffin Mountain.  Technically it is a sandbox, an area of play where characters can wander around and find trouble in, but really it is more of a setting, or even an anthropological exercise.  It discusses thoroughly the lands, history, and people of the Colymar, one of the 24 tribes that constitute the Heortling nation of Sartar.  The Colymar are historically (both in this world and in Glorantha) the best known of these tribes, and it is natural that they should be selected as the default homeland for Sartarite adventurers.

The first chapter gives a history of the tribe, as well as details on population, the climate and ecology of their lands, religion, political structure, and the twelve clans that make up the tribe.  We get statistics for the wyter--the genius loci of the Colymar--and for the typical member of the local militia. 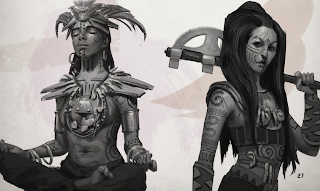 Subsequent chapters focus on important locations, such as Clearwine Fort (the political and cultural center of the Colymar), Runegate, the grave of King Berevenous, and the legendary Apple Lane. There are beautiful, illustrated maps (don't take my word for it, look at the accompanying examples), statistics galore for all important personages, and illustrations of important people.  The statistics are appreciated; RuneQuest is not a complex game but it is detailed, and can take a great deal of prep for a GM.  Much of the heavy lifting has been done for you here.  But the illustrations are where I would like to pause and focus your attention.

There is a tendency to think of the Heortlings and Sartarites as Gauls, Celts, or even the Norse.  This makes a certain sort of sense; they are barbarians, worship a storm god, and were occupied by a foreign imperial power.  But Indra was a storm god too, and the Lunar occupation of Sartar bore more resemblance to the Roman occupation of Judea than Gaul or Germany.  Indeed, the Heortlings are traditionally described as olive-skinned, with black, brown, or reddish hair, not necessarily the fair-eyed, haired, and skinned types we associate with northern Europe.  A better case can probably be made for them resembling the Bronze Age Proto-Indo-Europeans.  I am blathering on about all of this because one of the things that has most excited me about recent Gloranthan products--starting with HeroQuest Glorantha and the sublime Guide to Glorantha--is the art direction, particularly the way it portrays the Heortlings and their deities.  The "Colymar Tribe Book"...er...the RuneQuest GameMaster Screen Pack exemplifies this new trend.  The faces we see looking back at us don't look much like vikings, but more like the ancient migratory tribes that eventually became the Greeks, Celts, and Indo-Iranian peoples.  I like this because really, the Orlanthi are not norsemen...they are Orlanthi.  The new illustrations of them give them more a cultural feel of their own. 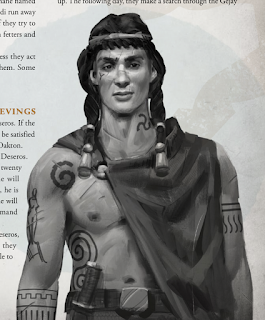 Still with me?  I apologize for the digression.

After detailing key locations across Colymar lands, there is a chapter of just rumors, intended to inspire your own adventure ideas.  Following this, the "Colymar Tribe..."sorry, the RuneQuest GameMaster Screen Pack, gives you not one but three full adventures.  True to the spirit of Glorantha, all three of these tales are really about protecting your people.  In Defending Apple Lane you protect the fabled hamlet from Tusk Riders.  In Cattle Raid, you defend a sacred herd from predators and a rival tribe.  Finally, in The Dragon of Thunder Hills--easily the most "Gloranthan" of all the scenarios--you go up against a dream dragon demanding to be worshipped as a goddess.  All three are terrific, and serve as models to aspiring RQ GMs what adventures in this setting should look like. 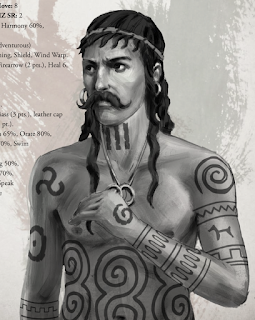 And if all that isn't enough for a "booklet," Chaosium throws in two appendices.  One contains even more adventure seeds.  The second--which really should have been in the core rulebook, ahem--discusses Rune Metals and Magic Crystals.

The key maps in the "Colymar Tribe Book" (I swear, that is the last time I am going to do that) are also included separately in the pack. One is of Apple Lane, one is of Clearwine, one shows the clans of the Colymar tribe, one shows Dragon Pass and Prax (reproduced from the core rulebook), and one shows southern Peloria (the region just north of Sartar).  All are full color, and most look more like illustrations than maps. 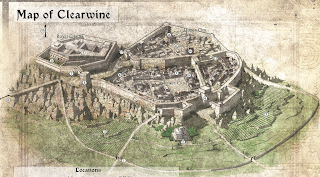 One of these we have already seen from the core rulebook, but the second is a lavish, painted sheet that reminds me a bit of the one Modiphius did for their Conan game.  It is four pages and gorgeous.  I will tease you with the first page of it here. 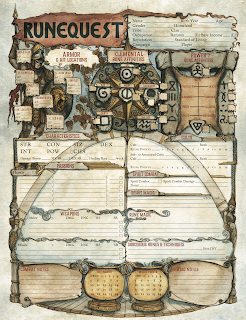 I admit to be inordinately excited by this.  The Gloranthan calendar holds a cherished spot in the hearts of Gloranthaphiles and this is the best rendition we have ever seen of it.  Reminiscent of the one Avalon Hill included way back in Gods of Glorantha, this version is full color and comes with an illustration of various regions in and around Dragon Pass at that time of the year.  No doubt these are also handed out when one opens a checking account at the local Issaries temple. 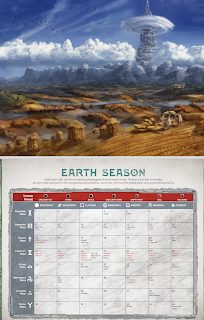 Finally we arrive at the item for with the RuneQuest GameMaster Screen Pack was named.  Inside the screen, as one might expect, are all the charts and tables a RuneQuest GM might need running an adventure.  Outside is a beautiful depiction of the Gods Wall just north of Raibanth in the Lunar Empire.  I was very pleased with this choice, as the Dara Happans believe it depicts all of the "true gods" of Glorantha, and it puts the mythology at the heart of the world quite literally front and center.  It is also nice to see the wall--previously always in black and white--in color at last. 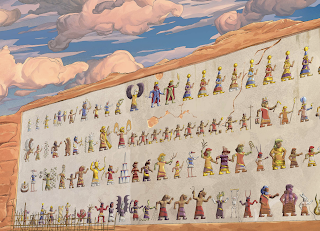 It occurred to me midway through this review that what we are really looking at here, finally, is a campaign set in Sartar for RuneQuest.  Despite being Ground Zero for the Hero Wars, despite most characters hailing from their even back in the days of the first and second editions, RuneQuest has traditionally set campaigns everywhere around Dragon Pass BUT Sartar.  HeroQuest has lavished time and attention on the kingdom, but this is the campaign setting I was dreaming of thirty-five years ago when I had a great deal more hair.

Like the core rulebook and the Bestiary, this is another strike (in the bowling, rather than baseball sense) for RuneQuest.  Or perhaps we should say a "critical hit."  I am having a hard time recalling gamemaster screen packs for any other RPG I have seen this lavish, beautifully produced, or well-written.  What it comes down to is that if you plan on running RuneQuest anytime in the near future you should have already bought this product five minutes ago.  Even if you have no interest in running a game in Sartar (I know, I know, like all diehard RQ grognards what you are waiting for is Robin D. Laws's upcoming books on the Big Rubble and Pavis), there is so much in this pack that you will want anyway.

And other than opening an account with Issaries, how are you going to get your calendar?

The RuneQuest GameMaster Screen Pack is currently available in PDF format.  Buy it at Chaosium now and get a coupon for the dead an pulped Adryami version later.