GOTHIC and GOTHICKA: A Look at Victoira Nelson's New Book 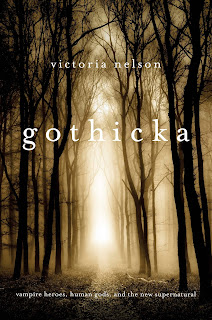 3. (Literary & Literary Critical Movements) (sometimes not capital) of or relating to a literary style characterized by gloom, the grotesque, and the supernatural, popular esp in the late 18th century: when used of modern literature, films, etc., sometimes spelt: Gothic


For the last twenty-five years of my life I have been playing with a dark jigsaw puzzle.  Perhaps you have seen the pieces strewn across the entries of this blog; religion, occultism, dreams, horror, imagination, the fantastic, the macabre.  I've never met Victoria Nelson, but having just finished her fascinating new Gothicka (Harvard University Press, 2012), it is clear that she has been playing with the same puzzle.  Gothicka shifts back and forth between literary criticism and spirituality, tracing the origin of "Gothick" (her spelling) as a post-Enlightenment genre of fiction and following its shadowy trail through Western society into the present.  She leaves no stone unturned as she tries to understand how the genre came to be, how it has grown into a thriving subculture, and where it might be leading us.

Generally said to have all started with Horace Walpole's 1764 The Castle of Otranto, Gothic fiction is the precursor of the modern horror tale.  Like all genre fiction it is littered with certain tropes; the innocent young heroine, a dark and menacing stranger, grim family secrets, brooding and ancient architecture, and the power of the past to act upon the present.  But the black heart of the Gothic isn't these trappings.  It is about the intrusion of the supernatural into a rational and ordered world.  I think it is important to emphasize this because it is what separates Gothic from fantasy fiction.  In fantasy, the supernatural belongs.  It is part of the fabric of the setting.  In the Gothic, the supernatural is the iceberg and rational reality the Titanic.

Nelson clearly places the Gothic into historical context.  It appears during the Enlightenment, a period in which the earlier, medieval view of the world--a supernatural hierarchy ruled by God, administered by angels, and seeped in magic and miracles--has by and large been shattered.  To the medieval mind the world was supernatural and mysterious; to the minds of the Enlightenment it was something ordered and rational.  Reality could be studied and understood.  The Gothic emerges to preserve that earlier world view.  It seems to suggest that maybe we are wrong...maybe the world is irrational after all.  This is why we call it Gothic, a name that conjures up the Dark Ages.  In the Gothic story, scratch the surface of the modern world and the medieval is there looking back at us.

Which, of course, explains the disproportionate presence of Catholicism in the Gothic tale.  Roman Catholicism and medievalism are inextricably linked in the Western mind.  The Church dominated that era.  Thus whether it is The Amityville Horror, The Conjuring, The Rite, The Exorcist, The Last Exorcism, or even the classic vampire tale ('Salem's Lot, Fright Night), it is to Catholicism and the trappings of Catholicism that people automatically turn in the face of the supernatural.  When was the last horror film in which you saw a Baptist minister summoned to cleanse a haunted house?  A Lutheran pastor?  Deep inside, we understand that these newer protestant sects have no power over the intrusion of the Dark Ages back into our lives.  It has to be the Church that was there.

Gothic fiction thrived in the 19th and 20th centuries in the vacuum created when the supernatural was banished from daily life.  People now continued to experience the supernatural in the pages of fiction or on the silver screen.  But as we drew closer to the 21st century, something unexpected began to happen to the Gothic, and this is the core of Victoria Nelson's book.  Since the 1960s the monsters have been undergoing a transformation.  The Witch became the beautiful Samantha Stevens, the feisty Willow Rosenberg, the ladies from Charmed.  The Werewolf became sexy hunks like Jacob Black and True Blood's Alcide Herveaux.  And the Vampire, from True Blood to The Vampire Diaries and Twilight, is the brooding heartthrob.  And across the board they all had one thing in common...the transformation of the human being into something larger, greater, "higher."  The monsters of Gothic fiction stopped representing states of damnation and became instead paths to ascension.

None of which is as strange as it seems.  Again, we must remind ourselves that in the medieval imagination nothing, not even Satan, was as terrifying as God.  It was God who sent the Black Death, it was God who watched you at all times, it was God who would punish you if you disobeyed.  God, as the ultimate representative of the supernatural was terrible, awful, and inexplicable.  It was wise to be "God fearing."  But at the same time, God was the gateway to the numinous, to transformation, to becoming something greater than your self.  Horror and awe go hand-in-hand.

Modern religions have been increasingly about the evolution of the self into a state of godhood.  The doctrine of salvation from above has become one of self-transformation.  We see this in Scientology, Mormonism, and Christian Science.  We see it in newer occult movements like Thelema, Satanism, or some schools of Wicca.  And we see it happening in the heart of the Gothic.  The shock and terror of the supernatural breaking down the walls of ordered reality has given way to possibility...to the notion of escaping the rational world into a higher state of potential and power.  Where once the Vampire was the ultimate state of damnation, cast forever from the grace of God, in the absence of God he becomes a transformative savior figure who offers liberation from human frailty and death.

It is clear that in the Gothic genre and the subculture it has spawned, Nelson sees a kind of emerging spirituality.  Though she mentions Anton LaVey several times in the book, in many ways she echoes exactly what he envisioned.  This is particularly the case when she discusses "Primary Believers" (religious practitioners who inhabit an ultimately supernatural world) and "Secondary Believers" (people who suspend disbelief and enter into a supernatural world temporarily).  This is exactly what LaVey believed his new religion to be, a society of Secondary Believers who experience the supernatural as self-created and self-transformational psychodrama.  I suspect the Church of Satan is a precursor of the kind of experience she sees Gothic heading for.

There is a lot going on in this book, too much to sum up here.  For me, reading it was a sort of validation for things I've been trying to express for years.  I would strongly recommend it to anyone with an interest in the Gothic, in horror, or the supernatural. It was a gripping, highly informative and provocative read.