VOX DIABOLI: ANTON LAVEY AND THE CHURCH OF SATAN 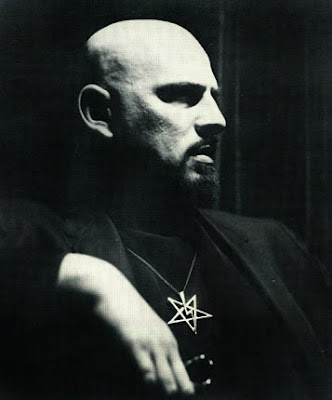 In 1966, while TIME magazine asked the public if God was dead and the hippies preached the Age of Aquarius with free love and tabs of acid, one figure emerged from the shadows to found the first public, above-ground Church dedicated to the Devil. The idea took off like a rocket, drawing the attention of sociologists, capturing the media, and bringing in members from all walks of life. Within three years, the Church of Satan’s founder had performed a high profile Satanic wedding for a New York socialite, acted as a Chaplain at the funeral of a Naval Officer member of his Church, and released The Satanic Bible, a manifesto that has never been out of print and continues to sell well four decades after its publication. But the most shocking thing about Anton Szandor LaVey (1930 – 1997) was not the depraved orgies, human sacrifices, or raging insanity one might expect from the Devil’s Advocate. The most shocking thing was that he was a decent sort of fellow who made a lot of sense.

There is a strong degree of paradox running through the man and his philosophy. He was was a Satanist who didn’t believe in the Devil, a rational materialist who practiced sorcery, a magician who despised occultists, and a liar who believed in truth. “The essence of Satanism, and Satanic practices,” explained LaVey, “is the integration of apparent opposites. We blend magic and rationality together, without compromising either, in the same way he integrate different aspects of one person in the same body.” For LaVey, man was an animal, the biological product of long evolution with all the same bestial drives and instincts as his ancestors. But he was also a thinking animal, a creature capable of imaging and creating who needed fantasy in his diet just as much as meat ane vegetables. For LaVey, the Devil—an earthbound angel with both divine attributes and bestial features—was the perfect metaphor for this. He rejected conventional religious wisdom that man’s animal instincts should be repressed or labelled “evil;” instead, he advocated indulging them in a safe and private environment. If both the law and the social contract forbade you from killing your arrogant and heavy-handed boss, why not exercise your pent-up feelings of rage in the ritual chamber, symbolically dismembering and ripping him apart? LaVey saw in the traditional trappings of ritual magic—indeed, in all religious ceremony—psychodrama that appealed to the emotional side of man. Though he advocated complete rationality in life, he saw the ritual chamber as a place to “let go,” to indulge in dreams and fantasy, before returning to the normal world.

And while most occultists were very careful to draw a line between their practices and stage illusions, LaVey laughed in their faces. For him, the same techniques of showmanship and misdirection that entertained audiences on stage could be used in everyday life to manipulate others into doing what you want. Following the lead of actors, performers, and carnival acts before him, he advocated creating a look and an image that would dazzle, confound, and spellbind those around you. Thus for decades, “serious” occultists and religious opponents would denounce him as a former lion tamer and carnival huckster, expressing their opinions that his Satanism was not a serious religion but a scam. But to LaVey, “all religion is show business,” and his Church was at least not hypocritical about it. The Church of Satan never filed for tax exemption, and called for other Churches to follow its lead. Nor did it have collection plates or require donations from its members, challenging other faiths to follow suit. Scrupulously honest, this “liar” and “trickster” lived quietly off the profits from his books, but unlike so many other ministers, never got rich off his Church.

Indeed, even the structure of his Church was a paradox, frequently referred to as an “organization of non-joiners.” LaVey never sought converts, and to be a Satanist all one had to do was practice the philosophy in his books. Those who did actually join the Church were never required to attend Bible studies, services, or even to meet other members. LaVey was always very clear that actually membership had only symbolic value, a psychological token of commitment to an idea. More shocking, to some, was that LaVey handed out “priesthoods” based on real life achievements. His religion was based on worldly, rather than spiritual, concerns, and those who won earthly fortune or acclaim were more entitled to priesthood than those who simply memorized esoteric gobbledy-gook.

What is clear is that LaVey took his Church very seriously. Though it never made him wealthy, he spent his life promoting and defending its philosophy. “Satanism will never be a religion of the masses,” LaVey often said, “but of an alienated elite.” Like Uncle Sam LaVey was looking for a few good men and women, and those who did not measure up were quickly expelled. And when it became clear to him that the rapid expansion and open door policy of the early Church had let in too many that did not understand the philosophy, “hangers on” who were along for the ride but contributed nothing, LaVey shut it all down, dismantling all other branches of his Church in other cities and structuring the organization more along the lines of quiet, underground cells.

Many have questioned—especially after reading The Satanic Bible and his other works—if LaVey could legitimately be called a “Satanist” at all. There was, after all, no “Devil” in the Church of Satan, and LaVey was adamant about his followers being law-abiding citizens. There were no orgies, no drugs, and no human sacrifices, none of the horror movie grue the public associated with Satanists. But LaVey would have argued “yes.” Though the Church did not worship or even believe in a literal Satan, LaVey believed it was Satanic in the way that it was the “adversary” and the “opposite” of all spiritual religions. If they taught that God created man, Satanism responded that man created God. If they focused on community and altruism, the Church of Satan emphaszied individuality and rational self-interest. If their dogma embraced absolutes of good and evil, Satanism scoffed and answered with subjectivity. If religions preached spiritual “truths,” LaVey’s spoke of spiritual “fantasies” that despite not being real were nevertheless necessary to the psychological well-being of man.

Today, forty-five years after its founding and fourteen years after LaVey’s death, the Church of Satan still exists. Under the leadership of new “high priest” Peter Gilmore (whose collection of essays, The Satanic Scriptures differ in content and tone from LaVey but still support and underline his philosophy), Satanism has entered the 21st century. It survives as it always had, quietly and under the radar, an alternative religion for free-thinkers with a flair for the dramatic. Even in the 80s, in the height of the Satanic Panic that gripped America, neither Anton LaVey nor the Church of Satan was ever accused of a crime, unobtrusively going about its business (the same could not be said for its chief rival, the “Temple of Set,” founded by a disgruntled defector from the Church of Satan who quit when he realized Anton didn’t actually worship the Devil; this organization was targeted by police and its leader questioned). Today, with Islamic fanatics flying airplanes into buildings and religious extremists in the United States trying to tunnel under the wall between Church and State, the Church of Satan hardly seems “evil” at all. Instead, it comes off looking sane, positive, and downright rational.

And that, Anton would say with a grin, is very Satanic.

Posted by Andrew Logan Montgomery at 7:08 AM