The Motel 8 was new.  Growing up, McCarthy's "Farm Fresh" produce stand had stood where the parking lot now was.  Long gone and paved over, the plot was now lit by halide lights, a bright island in a dark sea of rolling hills and dairy pastures.  On the opposite side of the interstate, reached by a new overpass, was a Subway sandwich shop and a convenience store.  There was nothing else for miles around.

Pulling into the motel I tried to remember the taste of the sweet corn my mother and I used to buy from McCarthy's.  It was the highlight of every summer.  We'd search through the bins for just the ripest ears, heaping them in the little bushel baskets.  I loved that corn, and even after I had grown up and moved away, the memory of it made my mouth water.  Now the hunger for it--like the hunger for sex or scotch--was gone.  It had died with my mortal body.  I felt every bit as soulless and lifeless as the parking lot itself.

Stefan helped me get the bags from the trunk, and I glanced around the lot.  There were only three other vehicles parked here.  I knew there was a Best Western further into town, but had consciously decided against checking in there.  Damien Draegonne was missing, possibly even presumed dead considering his medical condition.  Re-appearing in my hometown, alive and well, called for explanations I didn't feel like giving.  It was better to avoid the chance of running into familiar faces by staying on the outskirts.  My new passport, license, and credit cards all read "Alasdair Vaughn."  The plan was to get the lay of the land and confront Harrow as under the radar as possible.

The girl at the reception desk looked equal parts young, bored, and sleepy.  I thought she might be one of the Ag and Tech students earning tuition money.  Her bleached blonde hair was cropped short and shaggy, and she wore enough eye make-up to be a cross between Avril Lavigne and a raccoon.  But she made the effort to give us a bland smile when she stood and welcomed us, more effort than I expected from a clerk at 1 AM.  I gave her my card and asked for a pair of twin beds.

She started her spiel about check-out times and complimentary continental breakfasts, but I paid little attention.  I caught sight of the novel she had been reading when we came in, now partially tucked under the counter, and suppressed a smile.  It was one of those Charlaine Harris books, the ones that inspired True Blood.  Distracted, I barely noticed that she had stopped speaking, her voice trailing off mid-sentence.  When I looked back up at her she was staring at me.

"Is something wrong?"  I asked her.

She blinked a few times and then shook her head.  "No.  I mean, no.  Sorry.  Just me.  I'm real spacey sometimes."  She cleared her throat and handed me the room keys.  "Enjoy your stay."

I glanced at Stefan and nodded to him, and collecting our bags we headed out to the room.

Neither of us noticed the mirror on the wall opposite the reception desk.

The room was bland and boxlike after the one in Lake Geneva, white walls and cream colors with generic, uninteresting art.  It smelled faintly of lemon polish and plastic.  Tossing my bags on the bed, I glanced around.  First, I checked the bathroom, more out of habit than need, and then the locks on the door.  They seemed sturdy.  The drapes looked heavy enough to block out the sunlight, and the sprinkler system was modern and in good repair.  Though I could endure sunlight, fire could still easily destroy me.  It was extraordinarily difficult to rouse myself during day sleep, and I didn't much like the idea of being cremated in my rest. Sprinklers were important.  Satisfied the room would serve for a night or two, I started to help Stefan unpack.

The dull, constant throbbing in my veins was strong tonight, like fine wires throughout my body being pulled taut.  My entire body was starting to ache with need.  I still hadn't Fed from Stefan since his attack, and the Hunger was becoming a constant companion.  I realized I was staring at him right then, watching the artery pulse in his throat.  He was looking back at me with a curious mix of terror and longing in his eyes.

"You should Feed, Damien.  I am strong enough now."

I could tell he wanted to mean it...that he was addicted to the Feeding nearly as much as I was.  But his hands had balled into white knuckled fists, and there was a slight tremor in his body.  It wasn't desire this time, it was terror.  The attack was still fresh in his mind, overpowering his own cravings.  I shook my head and used the same excuse I had been practicing since we left Switzerland.  "Not yet, Stefan.  You still look pale to me."  He knew I was making an excuse, and let me do it with a nod.

Besides, I had other options.

I thought, briefly, of the clerk downstairs.  An image--a surprisingly vivid image--of slamming her against the wall, tearing open her blouse, and fondling her breasts while I tore open her throat played in my head.  Coming to myself, I quickly submerged it, shocked by how my entire body hungered for that.  I couldn't deny it...this was the farthest gone I had ever been.  It had been five days since I last Fed, the longest time since my Embrace.  I knew, from what Athena had assured me, I was strong enough to go another week at least before Dusk took me and I slid into vampiric dreaming death.  The thought didn't comfort me...it terrified me.  A dull, aching Hunger radiated from the centre of my chest, the cavity where my heart used to beat.  It was a fucking black hole.  I could barely think of anything else than tearing flesh and trying to appease it with the wet rush of hot blood.  If this was five days...what on earth would I be like in a week?

I went to the window, allowing my senses to reach out and scour the dark.  The clerk was one option, but she was risky.  She was awake and alert, manning the front desk.  Now, feeling the tremors in the air, I sensed at least five other heartbeats, all in the slow rhythm of deep sleep.

"I am going out," I whispered, partly to myself and partly to my Familiar.  In the window glass he looked up at me, staring.  I could see the worry in his reflection, even though my reflection, which should have been just inches from my face, was nowhere to be seen.

Before he could protest I let myself out, pulling the door closed behind me.  My hand was shaking, and I closed it into a fist to stop the tremors.  Just like a fucking junkie.

The night air felt cool against my face.  I felt it brush across my skin.  It was chilly enough that I should have been cold, if my body felt cold any longer.  But cold was now my base state, and it was the heat of the sun and fire I had to fear.  Cold could do nothing to me.

Grabbing the rail I hopped over it, and fell 20 feet to the ground.  I landed without sound on the sidewalk below.  The highest concentration of heartbeats, calling out to me like taiko drumming in the dark, was down here.  For some reason--maybe being home again--my condition was never more clear to me as it was then.  I was a dead thing...my flesh was dead, my skin, my eyes...and the only thing that kept me up and ambulatory was the stolen life oozing through my veins.  This was me.  This was me for all of eternity.

And it didn't matter.  I was too hungry to think about it.

I went to the first door.  Quietly, I gripped the handle and turned it.  Locked.  No matter, my plan was to try the doors of the occupied rooms and see if any had been left open.  This idea seems absurd to you, gentle reader, who grew up in the city, but from where I was raised, most people left their doors unlocked.  All I needed was one in five.

I moved to the next.

They say the third time is the charm, and in this case it proved true.  I turned the knob and it turned easily, unlocked.  A smile crept over my face.  I tried to remain calm even though the Hunger in my veins was screaming EAT RIP TEAR BLEED DRINK in my brain.

I entered the room.

She was sleeping just a few yards away.  I could tell from her pulse she was a woman, possibly in her late fifties.  I would have to feed gently so as not to kill her.  I might have preferred younger prey, but hers was the open door.  She had all but invited me in.

I moved silently across the carpet, my fangs sliding slowly from their sheaths.  My entire body trembled with need for her...it was like being sixteen and needing to fuck so badly you mind was hijacked with it.  It was being so hungry that your friend across the room started to look like meat.  It was...

Well.  You get the picture.

I pulled the blankets from her, and slowly rolled her over.

Then I leapt back, as if I had just touched hot coals.  My entire mind froze.

She seemed to sense it, sitting up suddenly, looking around as sleep fell from her eyes.

On pure instinct I crept backwards, straight into the wall.  On the bed, my mother looked around the room, blind in the dark.

Sleep now, the voice purred. It came from the dark across the room.  Immediately, in response, my mother collapsed back into the pillows and began to snore.

My eyes must have bulged so wide they could fall from their sockets.  I stared into the shadow as it stepped from the corner and took on the proportions of a tall, spindly man.

Posted by Andrew Logan Montgomery at 1:48 AM 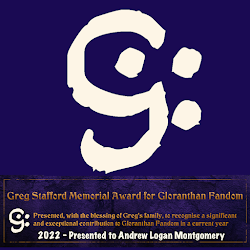